Accessibility links
Floods Threaten Historic Sites, Not Tourist Favorites The diversion of Mississippi River water into the Atchafalaya River basin may keep cities dry, but it could inundate some archaeological and Civil War sites. 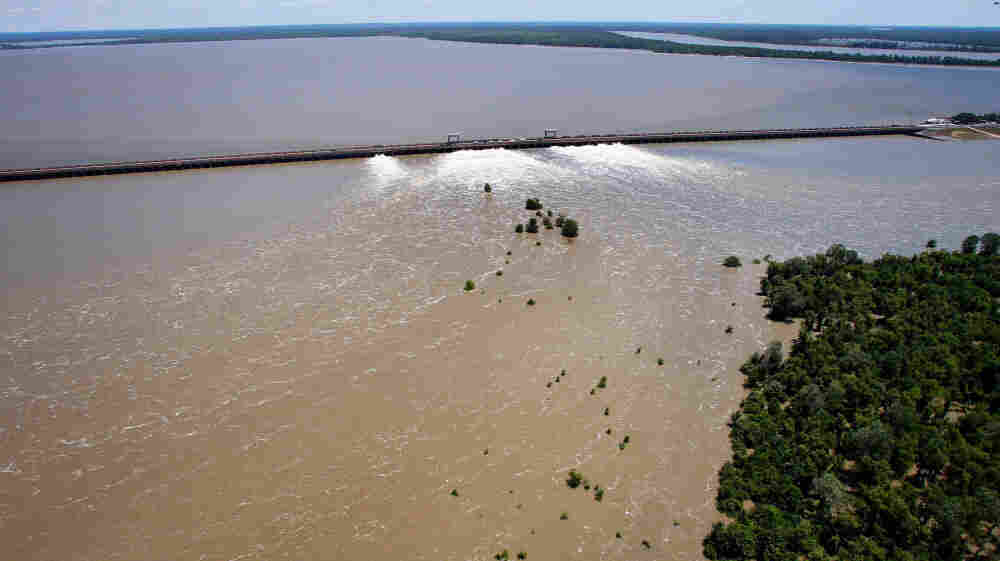 Water from the Mississippi River rushes out of open bays on the Morganza Spillway and into a pasture in Morganza, La., on Monday. Diversion of floodwaters has spared urban areas at the possible expense of rural historic and archaeological sites. Patrick Semansky/AP hide caption

There has been good news over the past 24 hours for Baton Rouge and New Orleans.

Diversion of rising Mississippi River waters though the Morganza Spillway northwest of the cities and into the Atchafalaya River basin appears to have helped lower the chances that the urban areas will be swamped.

Major tourist attractions and historic sites seem likely to be spared, including a necklace of antebellum-era plantations along the Great River Road. A few, including the white-pillared Nottoway Plantation, posted assurances of their dryness online, along with photos of nearby levees keeping water contained.

But what's good for Plantation Country and the Big Easy has required sacrifice in the rural, swampy area west of the Mississippi. And the toll includes not just homes, displaced residents and the swamping of vast acres of cropland.

It also includes historic and archaeological sites that are likely to be underwater for weeks to come. And state officials are bracing for damage that the diverted water could wreak on those sites.

What About The Animals?

As water released at the Morganza Spillway works its way through the Atchafalaya basin on its way to the Gulf of Mexico, wildlife will literally be swimming for their lives.

"Anything in the spillway area is going to have to leave unless they can tread water for a long time," says Don Reed, wildlife specialist at the Louisiana State University AgCenter. The spillway averages about 5 miles in width, and is about 20 miles long, he says, contained by guide levees.

That means that deer, feral hogs, black bears, possums, raccoons and other wildlife will be making their way to the spillway's two guide levees, which channel water to the Atchafalaya River.

"They have to seek higher ground, but they don't like to leave their home range," Reed says. So once the water begins to recede in the weeks to come, they will move back into their comfort zone.

While displaced, the animals will seek any habitat they can find, though they'll probably steer clear of people, he says. His advice to humans? "Leave the animals alone. They are going to be stressed, and they are not going to stay." Though it will present problems for farmers, displaced wildlife will also find a ready food supply in the agricultural areas along the levees.

Reed says that some animals will drown — "you know they're going to take a hit" — though experts haven't been able to estimate the mortality rate. The deer population is about the same as in 1973, when spillway gates were last opened. But the populations of feral hogs and black bears are much larger, making mortality calculations difficult.

It's always open hunting season on feral pigs, though Reed advises to avoid hunting them because the pigs are stressed and likely in close quarters with other wildlife. Regular hunting season is closed; the Louisiana black bear has been protected since 1992 under the Endangered Species Act.

"The primary concern for damage is relatively close to the spillway and near the channels, where silt could harm sites," says Chip McGimzie, Louisiana's state archaeologist.

Louisiana's Historic Preservation office has also been compiling a list of which of the state's more than 1,200 sites listed on the National Register of Historic Places — ranging from buildings to designated districts and landscapes — may be affected.

State officials, however, have noted that the area affected by floodwaters released through the spillway is sparsely populated and, while important, is not chockablock with properties on the National Register. The Morganza release is the first in 38 years.

The vast majority of the area has not been surveyed, McGimzie says, and there's little development in the basin because, bottom line, it's a swamp.

He estimates that there are about 530 known archaeological sites, ranging from a quarter-acre to up to about 10 acres, in the area where floodwaters will be diverted.

Sites affected include remnants of a Civil War fort in Butte La Rose, as well as scores of Native American burial mounds and campsites and early Acadian campsites. Many of the Indian campsites, he says, are represented by what are known as shell middens, archaeological sites that contain discarded shells and other detritus of domestic life.

There are likely thousands more such sites in the areas not surveyed.

The Civil War fort, where earthen embankments are still visible on the ground, will certainly be inundated, officials say.

Fort Burton, which once stood at the site, was captured by the Union Army in 1863. It was described by one Union soldier as a "grand rendezvous of mosquitoes, fleas, wood-ticks, lice, lizards, frogs, snakes, alligators, fever bacteria, dysentery microbes, and every conceivable type of malarial poison."

But the area being intentionally flooded is no stranger to floods.

"The Atchafalaya River used to flood annually — that's what rivers do," McGimzie said.

And the drowning of archaeological sites, he says, doesn't necessarily hurt them; it often protects them by burying them in silt.

Officials say they simply don't know what they'll find when the floodwaters recede. The interesting part, they say, is going to come afterward, when they start assessing the effect.

State historians have identified two sites on the National Register that will — or could — be affected by the spillway release: a lighthouse and a Civil War battlefield.

"Fortunately, we don't have too many properties that could be impacted," says Jacques Berry, spokesman for Lt. Gov. Jay Dardenne. "It's not an area that has a lot of anything other than wildlife and flora." 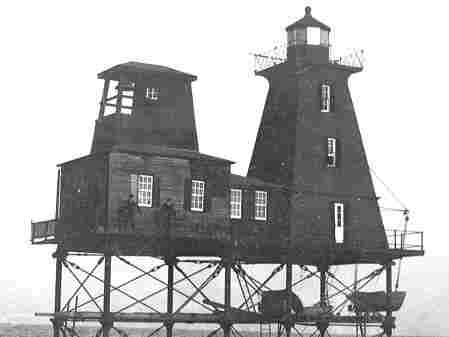 The Southwest Reef lighthouse, on the Atchafalaya River near Berwick, La., is likely to be affected by the diversion of floodwaters. Above, it is pictured at its old location in the Atchafalaya Bay, before it was moved in 1987. Courtesy of the United States Coast Guard hide caption 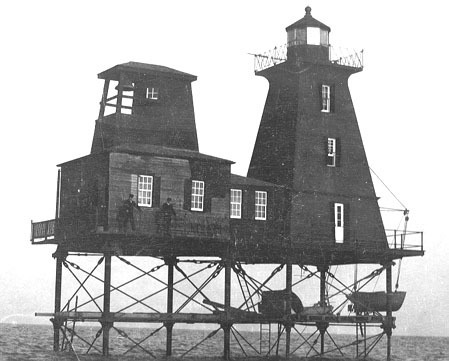 The Southwest Reef lighthouse, on the Atchafalaya River near Berwick, La., is likely to be affected by the diversion of floodwaters. Above, it is pictured at its old location in the Atchafalaya Bay, before it was moved in 1987.

The historic Southwest Reef lighthouse on the banks of the Atchafalaya River in Berwick is likely to be affected by the diversion of floodwaters. The circa-1856 structure, which once stood in Atchafalaya Bay, was moved upriver in 1987.

There are more historic structures in next-door Terrebonne Parish, where backwater flooding is a concern, Berry says, but most are surrounded by levees.

Rising water is also a concern at the Port Hudson battlefield, Berry says, the National Historic site of an 1863 Civil War battle, part of the key struggle for control of the Mississippi River.

Located upriver from Baton Rouge, the site now includes the battlefield and cemetery, as well as hiking. Those trails, in the lower part of the site, have already been closed.

Though nothing is certain, Berry says that officials don't expect the battlefield, now the site of Civil War re-enactments, to go underwater — "especially with the river cresting earlier than expected."

And that has alarmed those in the state's tourism industry.

"A lot of people have heard that Cajun country is underwater, and that's not the case," says Lauren Bodin of the Louisiana Travel Promotion Association, a member organization.

"The Morganza Spillway hasn't been opened since 1973, so it's hard to predict what will happen — but we're doing business here as usual," she said.

A conference call the association held with many members the day before the Army Corps of Engineers began opening spillway doors revealed anger at the media, and a handful of reports of expectations of some backwater flooding.

Some companies providing swamp tours have had to adjust because high waters prevented them from getting into tributaries, Bodin says, and there have been scattered reports of hotels closing.

"But not many had to take precautionary measures," she says.

The federal government doesn't typically take lightly actions or activities that have the potential to affect historic sites.

Typically, an action such as the spillway release would, under federal law, have required a review of the action's effect on historic and cultural sites — and that can take up to 30 days, says Caroline Hall at the federal Advisory Council on Historic Preservation. 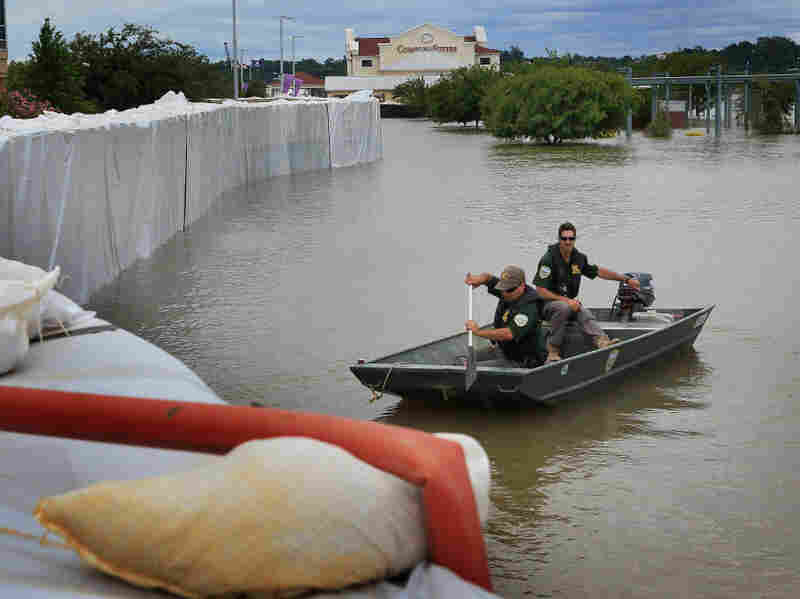 Louisiana Department of Wildlife and Fisheries officers patrol along a levee constructed around a medical center to hold back floodwater from the Mississippi River on Monday in Vidalia, La. Scott Olson/Getty Images hide caption

In emergencies, however, the review process can be bypassed if there's a demonstrated threat to human health, life and safety.

"We obviously care about the protection of historic properties," Hall says. "But the importance of health and safely far outweighs other considerations.

Federal officials will get involved again after the water recedes and once local officials determine what needs to be done to stabilize historic properties, or to demolish them, if damage dictates.

The good news is that floodwaters released through the spillway are moving south much more slowly than expected, according to Berry of the lieutenant governor's office.

The Army Corps has also said it would very likely open no more than 25 percent of the 125 gates at the Morganza Spillway, Berry says, meaning volume and velocity of water will probably be far less than once anticipated.

The area is technically in a drought, so the land is absorbing more water. And, Berry says, the proliferation of crawfish farms and vegetation is also slowing the flow.

"The water will get there, but it's not moving as quickly as expected," he said — a better-case scenario than most anyone was envisioning just a handful of days ago.