Accessibility links
How Even The Best Of Us Can Act 'Out Of Character' We're often taken aback when a respected governor, political candidate, husband or wife is caught cheating. In Out of Character, David DeSteno argues for the growing body of evidence that shows how everyone — even the most respected among us — has the capacity to act out of character. 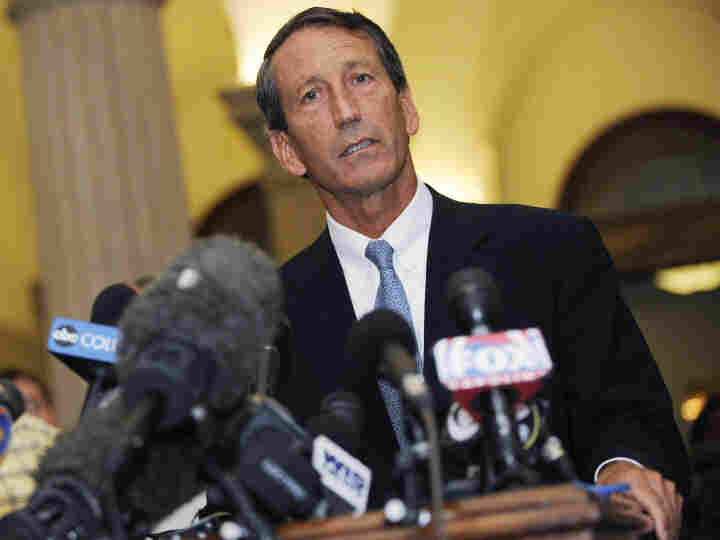 South Carolina Gov. Mark Sanford admitted to having an extramarital affair in June 2009. Out of Character quotes his friend Tom Davis as saying, "I never would have expected something like this. This is not in character for Mark Sanford." Davis Turner/Getty Images hide caption 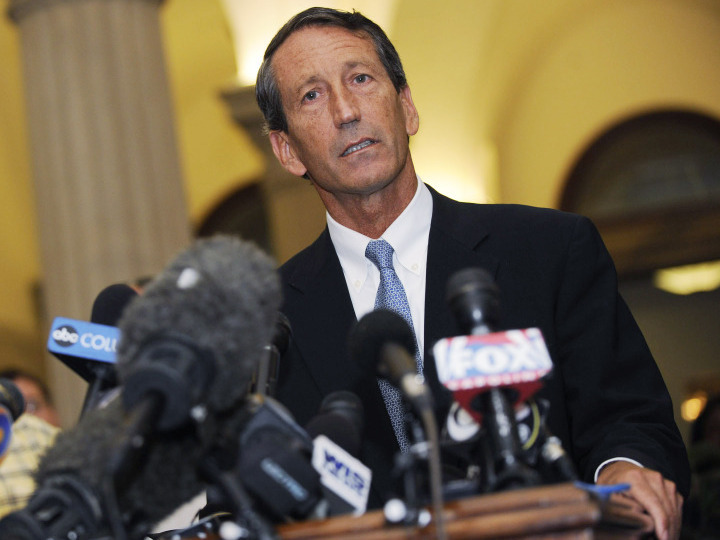 South Carolina Gov. Mark Sanford admitted to having an extramarital affair in June 2009. Out of Character quotes his friend Tom Davis as saying, "I never would have expected something like this. This is not in character for Mark Sanford."

We're often taken aback when a respected governor, political candidate, husband or wife is caught cheating. But psychologist David DeSteno argues that there's a growing body of evidence that shows that everyone — even the most respected among us — has the capacity to act out of character.

The book Out Of Character, which DeSteno co-wrote with psychologist Piercarlo Valdesolo, details the evidence and applies it to familiar stories.

"We spent a lot of time constructing situations that pose challenges to people in the ways of moral dilemmas to see ultimately, when push comes to shove, what they'll do," DeSteno tells NPR's Neal Conan.

DeSteno cites one experiment in which subjects where told to flip a coin in order to choose between a simple, fun task and a boring, hour-long task. They were also told that the next participant would have to do the task that wasn't chosen, and then they were left alone to their own devices. 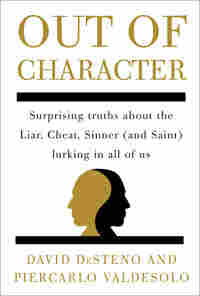 Out Of Character: Surprising Truths About The Liar, Cheat, Sinner (And Saint) Lurking In All Of Us
By David DeSteno And Piercarlo Valdesolo
Hardcover, 272 pages
Crown Archetype
List Price: $25

"These were experiments centered on hypocrisy," DeSteno says. "If you do this, what people will typically do when we leave them alone is 90 percent of them will not flip the coin."

That is, they'd cheat the system and pick the preferred task for themselves. Later, when asked if they had acted fairly, the subjects responded that they had.

Then, those same subjects were asked to watch another participant — really, a fake participant planted by the researchers — do the same thing. They observed that person skip the coin toss and choose the easy task, just as they had done. Only this time, they were quick to condemn the planted participant.

DeSteno says that's because "when they don't flip that coin, they feel that immediate pain of guilt. It's just that if you give them 30 seconds, unbeknownst to them, their mind will rationalize it away."

"There's really an inherent tension in our minds between what we refer to as short-term goals and long-term ones," DeSteno says. "If you're a hypocrite too often, it's not going to be very beneficial for your long-term relationships. But once in a while, if you can get away with it, people will often try to do so and rationalize it away."

DeSteno says the push and pull between short- and long-term goals, and selfish and selfless impulses exists at both the level of intuition and rational thought.

"It's when they disagree that some of the most interesting changes in our behavior happen," he says.

Are Politicians Especially Prone To Affairs?

Take the coin-flipping experiment, which can be cleared of its hypocritical results with only the slightest change. When participants were asked to pronounce a judgment on their own actions after counting backwards from seven — that is, to focus on something else in the time their brains would otherwise be rationalizing their actions — they judged their actions just as harshly as they had judged those of the planted participant.

The bottom line, according to DeSteno, is that while character is typically thought of as something fixed, it's actually much more dynamic.

"If you look at the scientific data, what we see over and over again is that people's moral behavior — for ill and for good — is much more variable than we would ever expect," he says.

So it's no use strictly defining someone's character because, DeSteno says, "We're continually going to be surprised when their behavior falls outside of those bounds."

Excerpt: 'Out Of Character'

Out Of Character: Surprising Truths About The Liar, Cheat, Sinner (And Saint) Lurking In All Of Us
By David DeSteno And Piercarlo Valdesolo
Hardcover, 272 pages
Crown Archetype
List Price: $25

Character — what Webster's defines as "the complex of mental and ethical traits often individualizing a person" — has long been almost universally agreed to be a stable fixture. People believe that it is formed at an early age through learning and experience, and that it becomes internalized and solidified into a deep-seated disposition that guides their actions over the course of their lives. In fact, the word character itself comes from an ancient Greek term referring to the marks impressed indelibly upon coins to tell them apart. And since that time, the term has been used to describe the supposed indelible marks pressed upon humans' minds and souls that "reveal" their true nature. Character is the currency we employ to make judgments about people — to determine who is good and who is flawed, who is worthy and who is not, who is saved and who is damned. Character, quite simply, is who we are, like it or not. Everyone believes this to be a fact; even The Complete Idiot's Guide to Understanding Ethics says that character traits are fixed, deeply ingrained features of personality.

But if this view is correct, some things just don't add up. If character is stable, how could Mark Sanford and others like him fool so many people for so long? How could they have concealed their moral shortcomings from their families, friends, colleagues, and communities year after year? It's hard to imagine that most people are capable of such an elaborate ruse. As Tom Davis, one of Sanford's closest friends for thirty years, put it: "I've known Mark, and the opinion I've formed of him, I never would have expected something like this. This is not in character for Mark Sanford." Virginia Lane, one of Jenny's close friends, echoed the view: "Mark's the last person on the planet we thought this would happen to." And Jenny herself was the most shocked of all: "I always believed that Mark and I had no secrets. After all of these years in the public eye, our lives were open books to one another, let alone the public." "It never occurred to me that he would do something like that," she said upon reflection. "The person I married was centered on a core of morals."

But in a way, our responses to situations like these aren't entirely logical or fair. Should a single moral failing erase a lifetime of good behavior? Why does a single transgression seem to give us license to brand someone with the indelible mark of a marred character? One explanation is that because these single events are so shocking and so memorable (not to mention so beaten to death by the media), they eclipse all else. But if you buy that view, then why isn't the reverse true? Why doesn't a single good deed, even a memorable one, ever seem to be seen as a mark capable of defining a person's true colors? Ever heard of Farron Hall, the homeless alcoholic who lived under a bridge in Winnipeg, and who in May 2009 risked his own life by jumping into the Red River in a heroic attempt to save a drowning teen? Probably not. That's because despite risking his life to save a total stranger, he was never hailed as a role model, never awarded a medal of honor or invited on the talk show circuit to discuss his moral bona fides. Instead, he was patted on the back by local officials and quickly forgotten. In society's eyes, this one good act wasn't nearly enough to redeem Hall from a lifetime of "degenerate behavior."

It seems that wolves may masquerade as sheep, but sheep just don't masquerade as wolves. We rarely view one good act as proof someone had good character all along, yet most of us are ready and willing to do the reverse. Those marked as "bad" can do something nice now and again and our opinion of them doesn't change, but all it takes for a person of seeming high virtue is one slip for us to claim that his or her character is inherently flawed.

This double standard may not be fair, but it's also not particularly surprising. As work by the psychologist Paul Rozin has shown, humans possess a fundamental tendency to accentuate the negative. Drop a fly into a bowl of delicious soup and the soup suddenly becomes inedible. Yet placing a drop of delicious soup in a bowl of dead flies hardly makes for a tasty treat. This may be an extreme example, but the point is that, rational or not, for the mind any sign of contamination — physical or moral — is hard to ignore.

History has borne this tendency out over and over. In one particularly egregious example, during the nineteenth and early twentieth centuries it was accepted in many southern states that a single drop of "black blood" in one's ancestry rendered one legally black, therefore tainting and making one ineligible for all the civil rights that applied at the time, whereas the reverse didn't apply. In short, the things we deem "bad" consistently seem to hold more weight than those we deem "good."

This very fact provides a bit of a problem for the commonly held view of character as a stable phenomenon. Think of it this way: if you believe that character is fixed, you have to accept that an instance of behaving "out of character" is one of two things: (1) an aberrant event (like Hall's heroic act) or (2) a window into the person's "true" and yet hidden nature (like Sanford's indiscretion). But in reality, which one we choose seems to depend on whether the person in question was a "saint" or "sinner" to begin with.

An even bigger problem for the fixed view of character is that acting "out of character" isn't a freak occurrence or something restricted to the famous few. As we'll see throughout this book, it's actually much more commonplace than most people think. There lurks in every one of us the potential to lie, cheat, steal, and sin, no matter how good a person we believe ourselves to be. Combine these two problems, and the view of character as a stable fixture begins to crumble.

This is not to say that character doesn't exist or that our behavior is completely unpredictable. A random system like that wouldn't make any sense either. If the mind worked that way, our social world would be chaos — our actions at any moment in time would be reduced to a simple roll of the dice. No, character exists. It just doesn't work the way most people think. 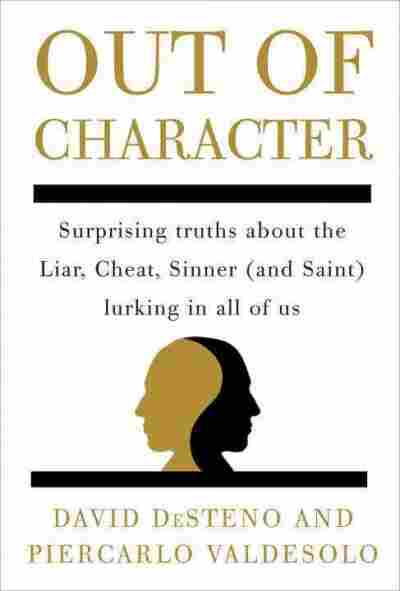 Surprising Truths About the Liar, Cheat, Sinner (And Saint) Lurking in All of Us

by David Desteno and Piercarlo Valdesolo

Title
Out of Character
Subtitle
Surprising Truths About the Liar, Cheat, Sinner (And Saint) Lurking in All of Us
Author
David Desteno and Piercarlo Valdesolo