Fresh (sometimes foraged) bamboo shoots are available only for a fleeting season. In Kansha: Celebrating Japan's Vegan and Vegetarian Traditions (Ten Speed Press 2010) author Elizabeth Andoh urges readers to "forget any and all taste memory of the canned stuff." It's worth experiencing the pleasure of eating still-warm tender inner bamboo leaves — a delicacy like artichokes and fresh hearts of palm — straight from the pot. The starchy oils in the rice bran neutralize hydrocyanic acid, the toxin found in most bamboo shoots. Andoh says the hot peppers discourage spoilage and add a spicy kick. 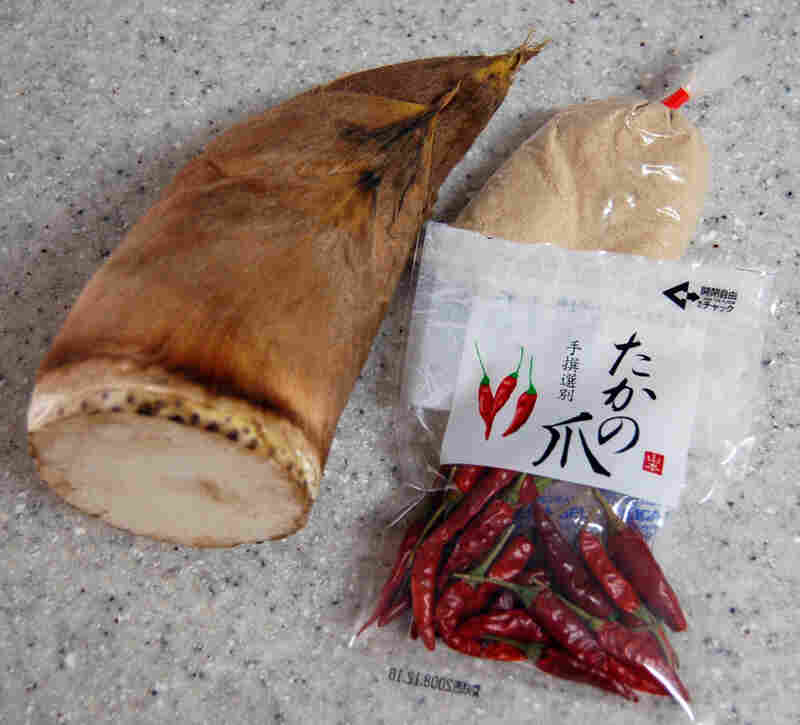 The fresh bamboo shoots are boiled in water, along with rice bran flour, or nuka, to neutralize toxins and chilies to add spice and prevent spoilage. Courtesy of Elizabeth Andoh hide caption

With a kitchen brush, scrub away any earth that may still be clinging to the shoots. Peel away and discard a few of the tough, darker outer leaves, rinsing away any soil that may be trapped between the layers. Cut off a sliver on the diagonal from the very top of each shoot, exposing an elliptical pattern of concentric rings.

Trim the base with a straight cut, removing a circular slice about 1/8 inch thick. Lay the shoot on a cutting board upright, with the tip at top and the base at bottom. Holding the shoot securely to keep it from rolling about, make a shallow slash lengthwise, from the narrow tip to the wider base. Do not cut the shoot in half. You want to slash it only, which will permit better circulation of moist heat during cooking (and make peeling easier later on).

Place the bamboo shoots in a deep pot and add the rice bran, chili peppers and enough water to cover. Ideally, the shoots will fit snugly in the bottom of the pot, with plenty of headroom. Top with a colander turned upside down to keep the shoots submerged in the bubbling liquid. 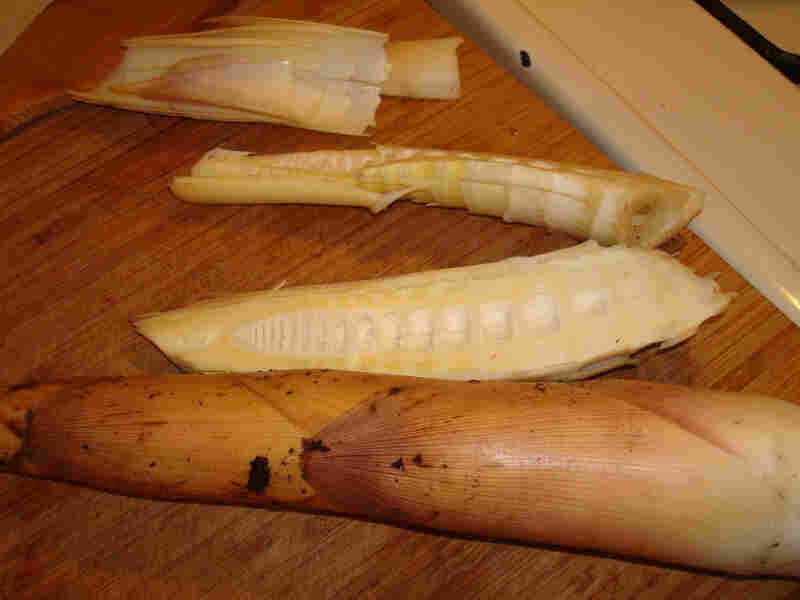 Peeling back the outer leaves of the bamboo shoot reveals the delicate champagne-colored inner leaves (top left). The shoots are sliced vertically after they're boiled and cooled. Laura McCandlish for NPR hide caption 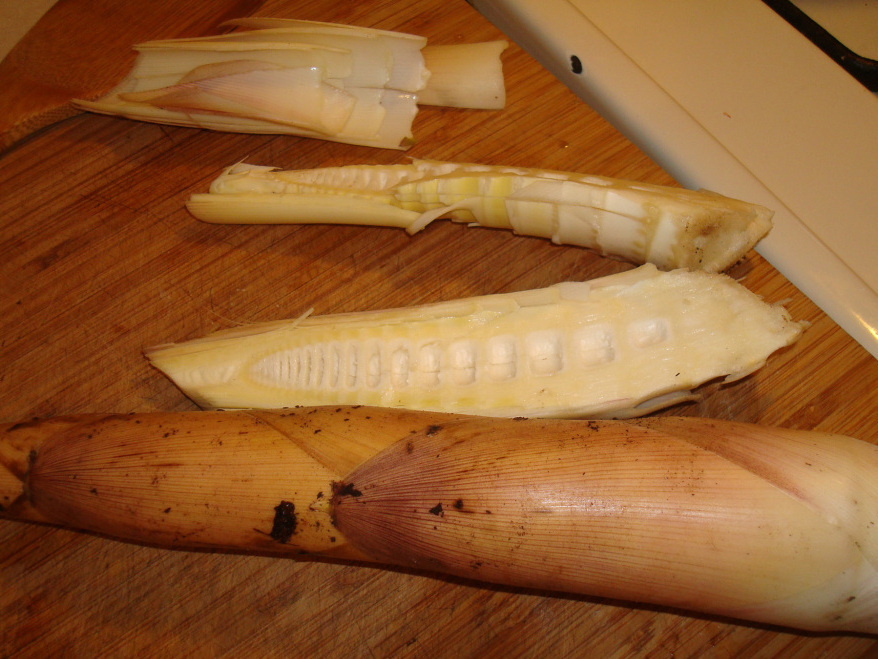 Peeling back the outer leaves of the bamboo shoot reveals the delicate champagne-colored inner leaves (top left). The shoots are sliced vertically after they're boiled and cooled.

Place the pot over medium heat, bring the water to a boil and adjust the heat to maintain a steady simmer. Do not let it boil vigorously. Cook the shoots for 45 to 50 minutes, or until a skewer or wooden toothpick meets no resistance as it passes through the core. Remove from the heat and allow the shoots to cool, lidded, in the cooking liquid.

When the shoots are cool enough to handle, lift them from the cooking liquid. Rinse away the excess rice bran under cold running water. Discard the liquid in the pot, and soak the pot in sudsy warm water for 30 minutes or more to make cleaning it easier.

Peel off each shoot's tough outer leaves, saving the delicious pale champagne-colored layers just beneath. Next, shave off any large, pebbly bumps from the outer surface of the shoot's broad base. Stand the shoot upright, measure about 3/4 inch from the bottom, and slice it off horizontally. Cut this base section in half vertically to expose a pattern of horizontal ledges and hollows inside. Try to remove any white, chalky material (not harmful to eat) caught in the hollows between the ledges.

Turn your attention to the tapered portion of the shoot that remains. Separate it into the tip (the top 1/2 inch or so) and the midsection. Now the shoots are ready to use in recipes.