Accessibility links
With Technology, Out-Budgeting Baby Boomers For their parents' generation, finances seemed relatively simple — the economy was good, money was flowing. Today's youth, though, live in a tougher economic climate, so many are learning to budget better and earlier. And new technologies — from home software to mobile apps — are advancing their money smarts. 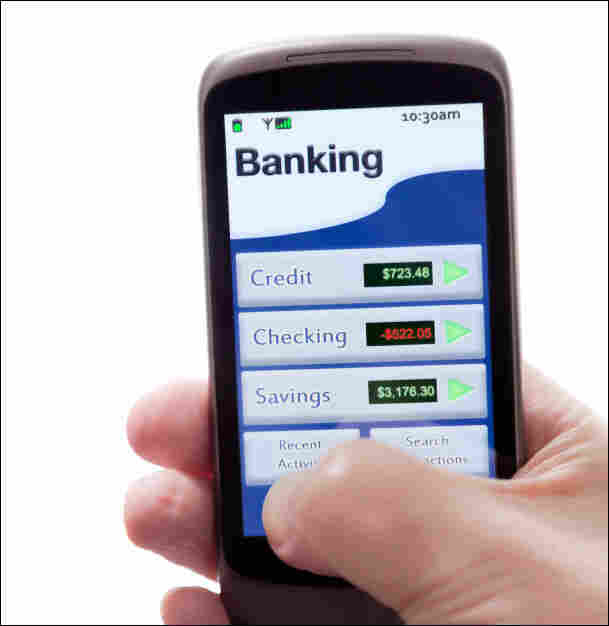 Mobile apps are one mechanism helping the tech-savvy to manage their finances. iStockphoto.com hide caption

Morning Edition asked me to do a story about how technology has shaped generational shifts in financial literacy. I didn't want to do it, for reasons that will become clear shortly. But first, let's take the case of Sarah Marczynski and her father, Robert. Sarah, 23, graduated from the University of Tennessee, Chattanooga, last week.

"I think about the time that I started to get money, either through baby-sitting or a job or whatever," she says, "maybe that was the first time that I realized that the way that my parents handled money — or certain aspects — was not the best way."

Robert Marczynski, 55, of Memphis, calls himself typical of the baby boomer generation.

"My wife and I are products of the '70s, '80s and '90s," he says. "Money was flowing and times were good. You were able to get your house, and leverage your house again — all these nice things you wanted to do. And carry three or four credit cards with you and ... "

Get yourself up to your ears in debt, basically.

"We tell her [about] the pitfalls of credit, and we can point to ourselves and say, 'We're good examples. Don't do this,' " he says.

So Sarah Marczynski is the opposite of careless. After overdrawing her account during her sophomore year, she swore off the cards. She carries cash for her discretionary spending — but that doesn't mean she's low-tech. Paper money she can see is part of her strategy to keep track of everything she spends — on the spreadsheet she always has pulled up on her laptop.

"Since I've started using it, I feel a little better," she says. "I know where my money's going. If I ever get into a hole, I know how I got there."

"Sarah, I'd like to get a copy of that template," her father says.

Looking At What You Spend

Daniel Roth, editor of Fortune.com, says it has become much easier than ever before to track what you're spending and how much money you have. For example, you don't have to wait until the end of the month before you get your statement — you can see it right away by logging on to the credit card's website. People have alerts on their mobile phones to let them know when they're about to overdraw ... and this is where, in my reporting, I started to kind of freak.

This is why I didn't want to do this story — I personally don't have a budget. Like a lot of people, I am terrified of budgeting sites like Mint.com — sites like the ones Sarah uses. I don't even know what Mint.com is.

Engage With Your Money

"It is a dashboard into your financial life," Roth says. But I don't want to look that closely at how I spend money, because I'm scared.

I'm more in the Robert Marczynski camp — he has some sympathy for those of us who want to run and hide from budgeting software. Where his daughter uses technology to get up close to what she spends, he can distance himself with automatic payments — for magazine subscriptions, cable and the like — that just get automatically debited from checking. All of the technology in the world can't force you to actually look at how you spend.

"[You] have to make sure that you're disciplined enough to take a look at your account online to see what's there," Robert Marczynski says, "how much you've taken out that day — particularly when it's coming time for an automatic payment."

But of course, many people live outside the banking system entirely.

Denise Early runs a check cashing place in Washington, D.C. She says a lot of her customers aren't computer literate — online banking isn't an option for them. Or they just don't trust the banks.

"They don't even want to keep their money in the bank," she says. "They'd rather come in here, cash their check, pay all their bills, see exactly where their money is going. And whatever they have left, they might have it at home, in a drawer somewhere."

It's not like everyone in the check cashing spot is older. Early acts as a sort of financial adviser for the young people who come in.

"I always advise them, 'Open a bank account. Establish a credit line,' " she says. "Some of them do it."

Paying as you go is no guarantee that you'll stay out of debt. If you do lose track of your payments and get into debt, maybe you'll end up like Robert Marczynski — who, at least, has Sarah.

"We count her as one of our accomplishments," he says.

"You did a great job," she replies — seriously, this time.