Accessibility links
Trey Parker And Matt Stone On Their Broadway Hit Musical 'The Book Of Mormon' Trey Parker and Matt Stone talk about The Book of Mormon, their blasphemous, hilarious and oddly endearing Broadway hit, which leads the Tony nominations field this year — and will probably go down in history as the only Broadway musical ever to combine Mormons, Uganda, filthy language and a chorus line. 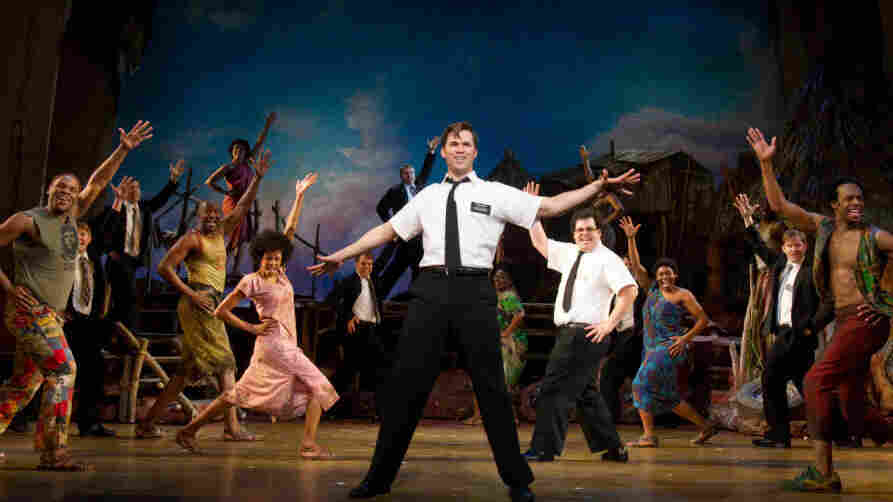 The Book of Mormon features music and lyrics by Trey Parker, Robert Lopez and Matt Stone and plays at the Eugene O'Neill Theatre in New York City. John Marcus/Courtesy of the artist hide caption 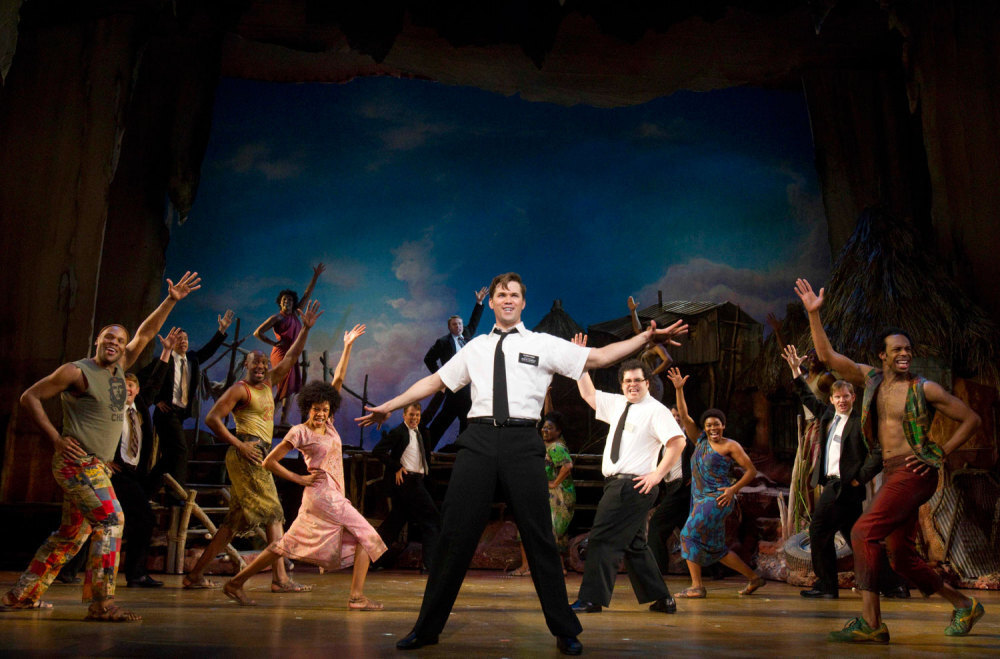 The Book of Mormon features music and lyrics by Trey Parker, Robert Lopez and Matt Stone and plays at the Eugene O'Neill Theatre in New York City.

John Marcus/Courtesy of the artist 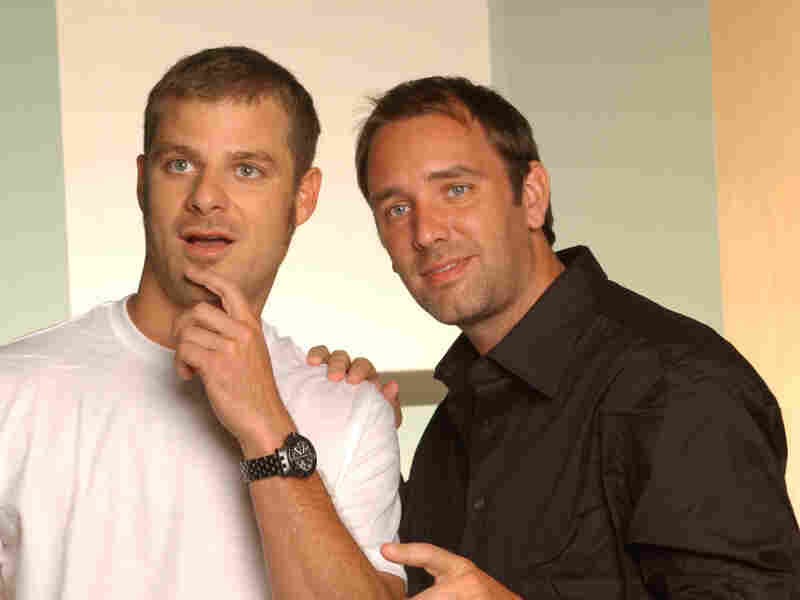 While in college, Matt Stone (left) and Trey Parker wrote and directed a black comedy called Cannibal! The Musical. A Fox executive saw the film and commissioned the duo to create an animated short, which eventually led to the creation of South Park. Michael Yarish/Comedy Central hide caption 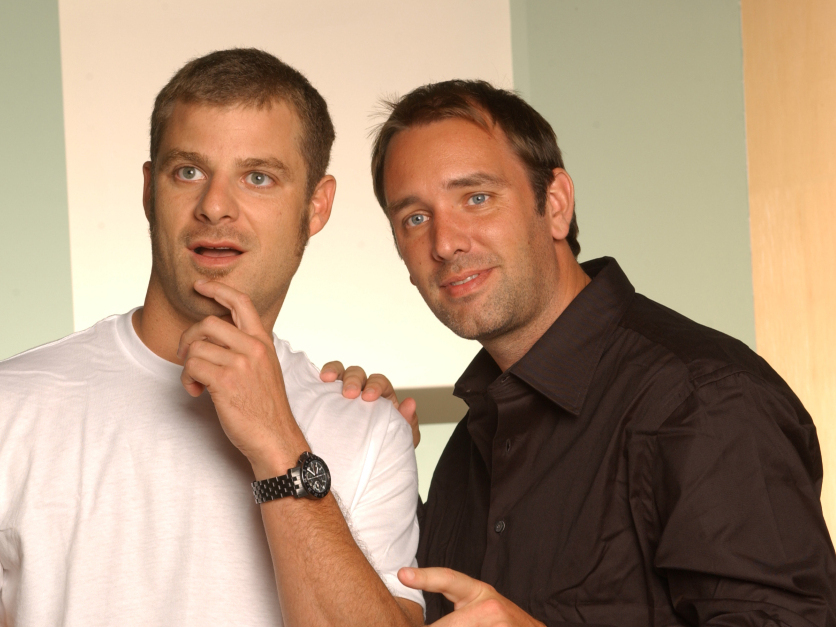 While in college, Matt Stone (left) and Trey Parker wrote and directed a black comedy called Cannibal! The Musical. A Fox executive saw the film and commissioned the duo to create an animated short, which eventually led to the creation of South Park.

Take the creators of South Park and the composer of Avenue Q. Add solid musical storytelling, Mormons, Uganda, AIDS, a chorus line and a healthy amount of smut — and you have The Book of Mormon, Broadway's blasphemous, hilarious and oddly endearing new hit.

The New York Times' Ben Brantley said the musical, which led this year's Tony nominations, is "more foul-mouthed than David Mamet on a blue streak ... [but its] heart is as pure as that of a Rodgers and Hammerstein show." The Washington Post's Peter Marks said it's "one of the most joyously acidic bundles Broadway has unwrapped in years."

Fans of South Park — the bawdy, crudely animated TV show on which Trey Parker and Matt Stone have satirized everything in the news and pop culture for the past 15 years — won't be surprised to learn that Mormons are the focus of the duo's new musical; the religion has been popping up on South Park for years. In one episode, Mormon prophet Joseph Smith fought an evil David Blaine. In another, Satan announced that only Mormons made it into heaven. Mormons also show up in two of Parker and Stone's earlier films, Orgazmo and Cannibal! The Musical.

If you think the musical skewers Mormons, though, think again. Parker and Stone do challenge the literal credibility of the story of The Church of Jesus Christ of Latter-day Saints. But the Mormons they write about come across as lovable and optimistic.

"I don't think anybody would want to see a two-hour-long Mormon-bashing, and we wouldn't want to see that either," Parker tells Fresh Air's Terry Gross. "We love the goofiness of Mormon stories. Some of them are incredulous, and we loved almost all the Mormons that we had ever met. So this was sort of this conundrum that we like to talk about — we think what they believe is really, really ridiculous, and yet they seem like pretty happy people."

The Book of Mormon stars Josh Gad and Andrew Rannells as two Mormon missionaries sent to a remote village in northern Uganda, where a brutal warlord is threatening the local population. Naive and optimistic, the two missionaries try to share their scriptures — which only one of them knows very well — but have trouble connecting with the locals, who are worried about famine, AIDS, maggots and all sorts of other things. 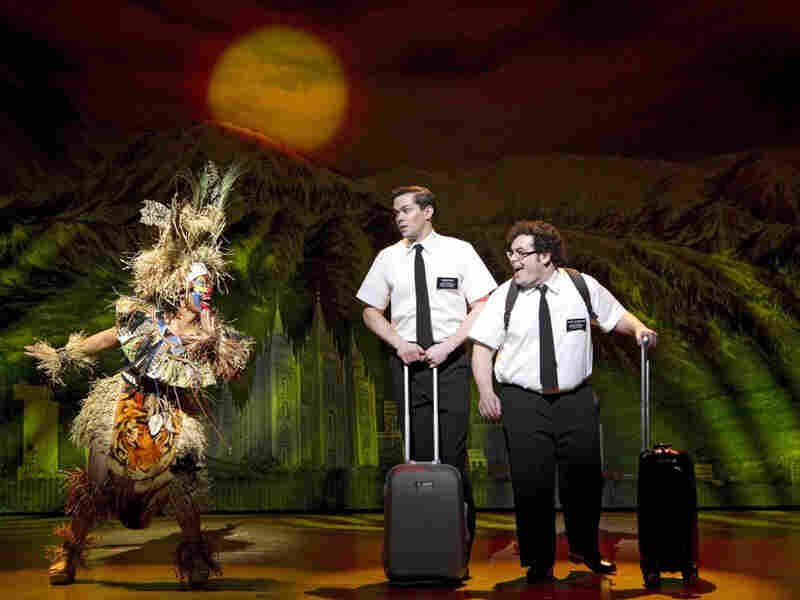 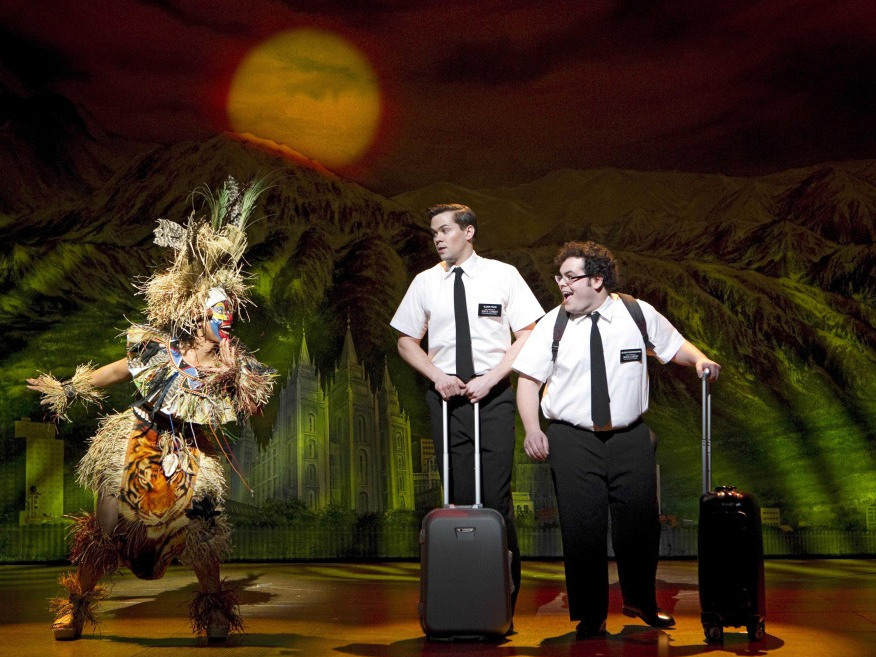 Joan Marcus/Courtesy of the artist

"We wanted it to be that place where you always read about ... where you go 'Can this place get a break? They have earthquakes and then cholera and then a warlord and then a famine and then no water?' " Stone says. "It was just supposed to be that place. And we settled on Uganda because they speak English there ... and it borders Congo and Sudan.

"It's supposed to be just generic, war-torn worst place on Earth. If you're in Utah, nothing you've learned in Utah when you're 18 or 19 years old makes any sense when you get there."

Because this is Parker and Stone, that dire setting is the frame for a show that features tap dancing and pop anthems, a Greek chorus and a Lion King-esque ensemble number. Along with critical acclaim, the musical has received largely positive feedback from Mormons who have seen the show, Parker says.

"The official church response was something along the lines of 'The Book of Mormon the musical might entertain you for a night, but the Book of Mormon,' — the book as scripture — 'will change your life through Jesus,' " Stone says. "Which we actually completely agree with. The Mormon church's response to this musical is almost like our Q.E.D. at the end of it. That's a cool, American response to a ribbing — a big musical that's done in their name."

On Mormons coming to his home

Trey Parker: "I've always tried to start a dialogue with them. But you learn pretty quickly that they are trained impeccably to be able to handle anything. So it's pretty cool to try to mess with them — because you can't do it."

On research for the show

Matt Stone: "We did take a field trip to Salt Lake City with Bobby Lopez, our co-writer, who had never been to Salt Lake City. And we interviewed a bunch of missionaries — or ex-missionaries. For us, it was pretty easy to find [these people]. We just talked to waiters in downtown Salt Lake City. Almost every single waiter had been on a mission. So that was where we got a lot of our research."

On writing about missionaries

Parker: "Naturally, when we're 17 or 18, we all think we know everything, and then life slaps you upside the head. And I think that happens for a lot of people just when they go away to college or they move out of the house. But a lot of these kids go to another country or another culture — and a lot of them end up in third-world countries — and they're probably seeing things that they have never seen before. So in addition to the coming-of-age story, we have a fish-out-of-water story — and it just seemed really funny to send these two kids who've grown up in this perfect place to a place where nothing makes sense."

Parker: "I have religious friends, and they're like, 'Well, if you look, it's proven.' And you're like, 'No, it's not proven.' Don't try to tell me that you can prove this stuff. Just say 'I believe it,' and I'm down with you. Don't mix the two together. Because you can't logically say, 'We know that Jews came from Jerusalem and settled in America and turned into Native Americans.' That just doesn't make any sense. But at the same time, if you say, 'I believe this,' I say, 'OK. Cool, man.' Because at the end of the day, we all have certain beliefs and deeply held things that probably don't make a lot of sense to anybody else."

On the ringing doorbells in the opening number, "Hello"

Matt Stone: "For every song, we wanted to figure out what the comedic hook of the song would be and what the idea of the song would be. It was the first song we wrote for the entire show. Once we knew that we wanted to start with missionaries, and we knew we wanted to start with missionaries at the missionary training center, [we thought] 'Let's start the way that your average person interacts with Mormons, which is those guys in white shirts that come to your door.' So before we got into anything else about Mormonism, we just wanted to start there. And then, pretty quickly, we came up with [the idea] to use the doorbell as actually part of the music, and start layering things on top of each other."