Accessibility links
For Some Athletes, A Short-Lived Financial Success Athletes can acquire great wealth without having a clue about money. The leagues are aware of the financial illiteracy and conduct financial seminars for all rookies. But one financial adviser says finance is an issue many pro athletes "don't understand, and it's not communicated right." 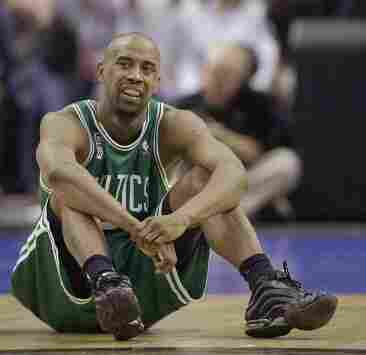 Boston Celtics' Kenny Anderson, seen here in 2002, earned more than $60 million during his 14 years playing in the NBA, yet declared bankruptcy the year his career ended. Chris Gardner/AP hide caption

In this era of home foreclosures and high unemployment, it's hard to sympathize with the professional athlete laid low by the high life. It seems almost impossible that an athlete making $5 million, $10 million, or, in the case of Derrick Coleman, $90 million over a career could lose all of his money. Of course, many a now-bankrupt athlete also thought it impossible.

"They see [their salaries] as infinite, like it doesn't end, like they can't spend it all," says accountant Scott Bercu, who has handled the finances of professional baseball and basketball players. "But, if you get $5 million a year, by the time you get done paying your agent and taxes, you have $2 million left to spend. That goes very quickly."

Among Bercu's clients is Kenny Anderson, the former point guard who earned more than $60 million during his 14 years playing in the NBA, yet declared bankruptcy the year his career ended. Anderson once joked to The New York Times that an NBA labor dispute would force him to part with one of his eight cars. In a follow-up article, Anderson said he actually did know the value of a dollar. In truth, says Bercu, Anderson knew his spending couldn't be sustained. The player and his accountant were planning for bankruptcy years before it became official.

People who can't stop spending usually are prevented from acquiring great wealth because of that very trait. Most very wealthy people, be they CEOs, entrepreneurs or financial professionals, deal with finances as a major component of their jobs. But athletes and other entertainers can acquire great wealth without having a clue about money. Athletes are often unschooled, and even the NFL, which has the most college graduates, is full of players who never had to strategize how to pay for an education because they were on scholarship. The leagues are aware of the financial illiteracy among many players, and therefore conduct financial seminars for all rookies. However, the seminars come during days of lectures on sexual harassment, drug policy and other topics that may not prompt newly minted 22-year-old millionaires to take careful notes.

Ed Butowsky, the managing partner of Chapwood Capital Investment Management, applauds the major sports leagues for good intentions, but says that in the minds of many pro-athletes, finances remain "an issue they don't understand, and it's not communicated right."

Butowsky advises NBA all-star Kevin Durant, 15-year baseball veteran Torii Hunter and scores of other guys who score for a living. His words are a bit different from most everything these players will hear. Everyone tells the athletes, "Be smart, don't overspend, invest." But Butowsky says the stars of the sporting world model their behavior on stars of the business world. "What these athletes do," Butowsky says, "is look at the front row, want to be the front-row guys."

The problem with the "front-row guys" is that they've often made their money through concentration in a single field. Butowsky advises that illiquid private assets should make up no more than 5 percent of an athlete's portfolio, once $3 million is already in the bank. In fact, Butowsky says Magic Johnson, with his business empire of movie theaters, restaurants and coffeehouses, is actually an example of how not to build a portfolio, despite Johnson's great success.

In order to educate athletes, Butowsky conducts boot camps for any player who wants to attend, where he gives out special calculators that demonstrate when a free-spending athlete will run out of money. For all this advice, Butowsky accepts no payment, not even free tickets to NBA games. Everyone has a cause; Butowsky's happens to be a group of the most envied wealthy people on the planet. But Butowsky's point is that too often they aren't wealthy for long.