Accessibility links
Giant Quake Reveals Japan's Other Unstable Faults Geologists didn't think the site of the March 11 quake, along the so-called Japan Trench in the Pacific Ocean, was a hot spot. But since then they've learned that during the quake, parts of the trench slipped an astonishing 180 feet or more. That could mean more big aftershocks are on the way. 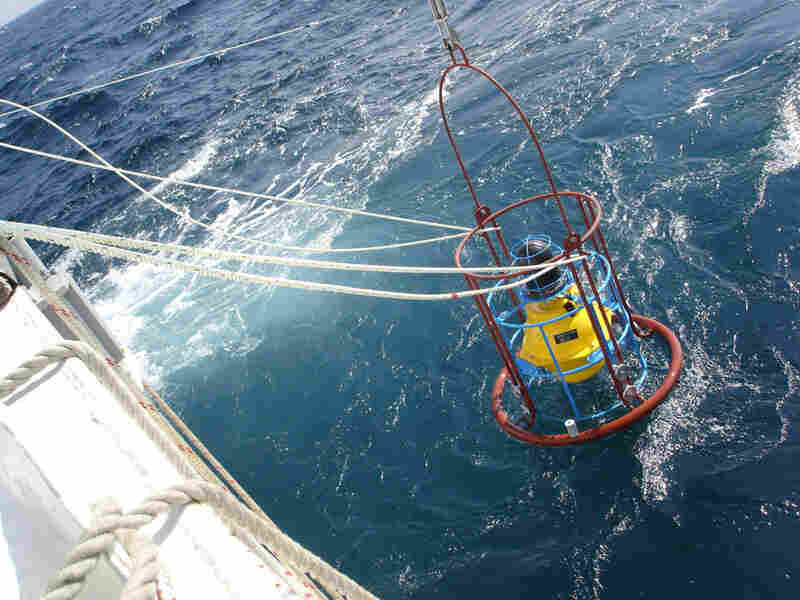 Geologists drop an acoustic transponder into the Pacific Ocean to measure movements on the seafloor. Courtesy of Japan Coast Guard hide caption 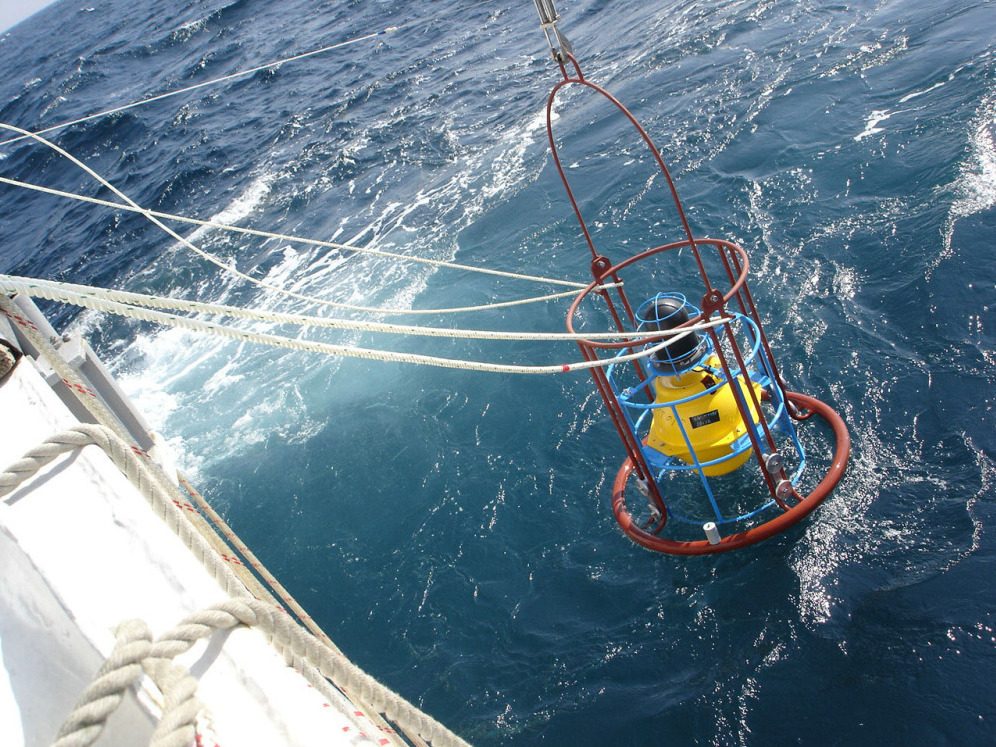 Geologists drop an acoustic transponder into the Pacific Ocean to measure movements on the seafloor.

The March 11 earthquake just off the coast of Japan surprised many experts. Geologists say they didn't expect that big a quake in that spot.

But they do fear that more big quakes may be in the offing in or near Japan. Scientists can't tell when, but they're trying to narrow down where.

The answers lie amid the huge plates that make up the Earth's crust. Think of them as floating ice sheets on a lake.

Where plates meet edge to edge, sometimes one shoves itself under the other. The plate may just creep smoothly underneath or get stuck. In that case, stress builds up until the edges snap free like an overstretched rubber band.

Japan is smack in the middle of a bevy of plate edges. "In Japan," says geologist Ross Stein of the U.S. Geological Survey, "we have the junction of three different tectonic plates, and some of them near Tokyo are highly distorted."

Distortions create stress. But Stein says geologists didn't view the site of the March quake, along the so-called Japan Trench in the Pacific, as a hot spot. They thought that section was a quiet "creeper."

"I mean, in retrospect, we all should have seen that this kind of earthquake was a possibility, and we should have read the tea leaves better," he says.

Now there are new tea leaves to read — lots of them, since Japan's seismic monitoring system is second to none.

One discovery: During the Tohoku-Oki quake — as the March 11 temblor is formally called — parts of the Japan Trench slipped an astonishing 180 feet or more.

A quake that big affects neighboring faults. It's like a game of pickup sticks: You move one stick, and it relieves — or adds — stress to the other sticks.

Mark Simons, a geophysics professor at the California Institute of Technology, has been looking nervously at a plate boundary south of where the March quake hit.

"It's potentially creeping and not producing large earthquakes," he says, but on the other hand, it's "potentially stuck and has just been loaded by a magnitude 9 [quake] right next to it and could produce another [magnitude] 8 or larger earthquake."

Simons describes his research in the journal Science.

Stein notes that the magnitude 9-plus quake in the Indian Ocean in 2004 was followed months later by another huge shock. He says that pattern could repeat in Japan.

"So far, the Tohoku earthquake is producing aftershocks at a rate that is typical of an earthquake of this size, which means we could have many more earthquakes to come," he says.

When? No one knows. But scientists think likely spots are offshore again. There's also a site due east of Tokyo, and another right under Tokyo. And there's Mount Fuji — the region near the volcano experienced a sizable aftershock after the March quake.