Accessibility links
Movie Review - 'Pirates Of The Caribbean: On Stranger Tides' by Bob Mondello The fourth Pirates of the Caribbean adventure drops Keira, adds Cruz, and bites off more vampire mermaids than Captain Jack & Co. may be prepared to chew. 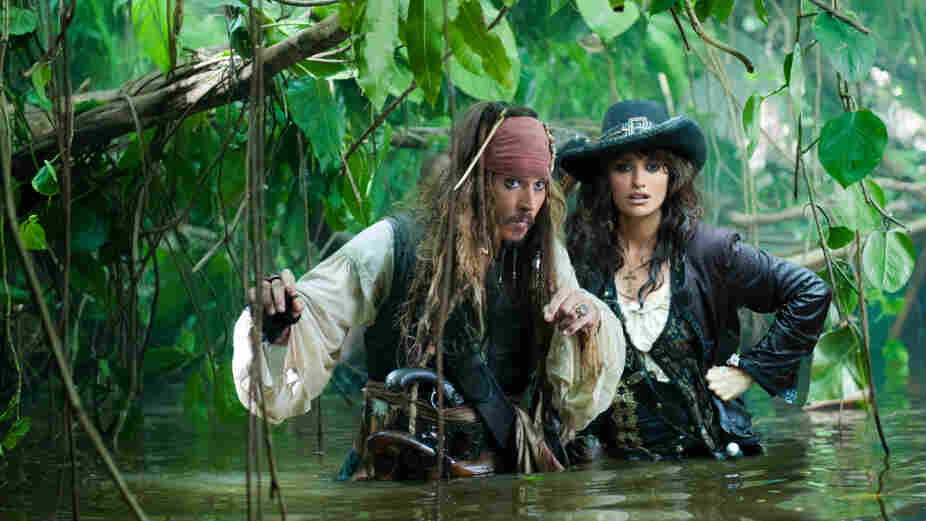 Pirates Of The Caribbean: On Stranger Tides

It must be exhausting, looking for an escape route every time you enter a room. I'd never caught Captain Jack Sparrow doing that before Pirates of the Caribbean: On Stranger Tides, but there's a new director at the helm this time — Rob Marshall, who made the musical Chicago — and I guess he wants you to be aware of his action choreography.

So in setting up an early Captain Jack escape from a palace interrogation, Marshall draws your attention — and Johnny Depp's — to the respective positions of a window, a chandelier and a gilded chair. Only then does he find an excuse for Depp to swish into action: an exchange of insults with the foppishly overdressed Captain Barbosa, who is now a royal flunky, that ends with Depp kicking food off a long banquet table, hurling that gilded chair through a window, swinging from the chandelier and eventually ending up on the street.

There, he evades British soldiers by plunging into an 18th-century version of rush hour — horse-drawn carriages, coaches and coal carts zooming every which way as Depp leaps from moving roof to moving roof. It's the kind of thing you can imagine Gene Kelly turning into a real tour-de-force, except he'd have insisted on doing it in one take, not with stunt doubles and chopped-up editing. Still, it's frenetic, and that's all most Pirates audiences expect anymore, right?

Speaking of labored, let's discuss the plot. The Fountain-of-Youth quest in On Stranger Tides has been touted by the director as reducing clutter in a series that has previously made clutter a point of style. And it does result in one long voyage rather than lots of little side trips, and in a through line that is admittedly clearer this time. But making things clear in a franchise based on a theme-park ride just has the effect of making the film seem best suited for youngsters — who may well freak out over those vampire mermaids.

Small kids won't really appreciate Johnny Depp, either, though frankly he's getting to be less fun as the series ages, possibly realizing that what's riskiest in Pirates 4 isn't walking the plank, but jumping the shark.

Not that producer Jerry Bruckheimer is ever going to sink this treasure hunt — worldwide grosses $2.6 billion and counting — as long as Depp is game to come back on board. On Stranger Tides ends with a post-credits tease for the next episode in what's apparently going to be a whole second trilogy. By the end of which, we'll be ready for ... what? Pirates of the Caribbean: On Golden Pond?