Accessibility links
Pumped Up: Are Americans Addicted To Oil? As many Americans struggle with higher gas prices, others look for ways to live using fewer fossil fuels. They pursue a personal form of energy independence — and they are finding that it's no easy feat.

Pumped Up: Are Americans Addicted To Oil?

Pumped Up: Are Americans Addicted To Oil? 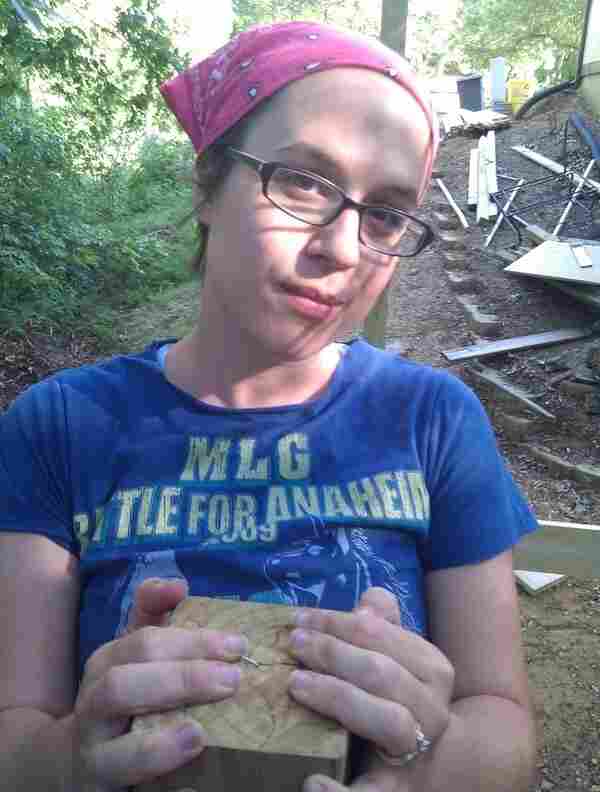 Mary Richert of Annapolis, Md., is trying to grow her own produce to curtail her oil and energy consumption. Courtesy of Mary Richert hide caption

As many Americans struggle with higher gas prices, others look for ways to live using fewer fossil fuels. They pursue a personal form of energy independence — and they are finding that it's no easy feat.

About a year ago, following the Deepwater Horizon oil rig catastrophe that released millions of barrels of oil into the Gulf of Mexico, Mary Richert decided that she wanted to live a life free of oil. "I quit," she told American Public Media's radio program Marketplace. "I just want to stop using oil completely. I just don't want to ever see it or think about it again."

So she set out on a journey to give up gasoline. Every day, Richert, 28, a project manager for a small tech firm, tried to eliminate one thing in her life that was made with, or dependent on the production of, petroleum. She quit buying plastic ware for her kitchen. She shopped for local produce. She chronicled her quest on her blog, Not an Activist.

But everywhere Richert turned, she realized how much she relied on fossil fuels. Petroleum so permeates her life, she decided that she might as well face it: She is addicted to oil.

"I don't think oil is bad," Richert says today from her home in Annapolis, Md. "Oil is simply a resource, and the way we use it has a powerful impact on our environment and our society."

She says, "It's easy to point fingers at the oil industry and say the companies are to blame for oil spills, lives lost, and environmental damage, but we're still buying what they're selling, so we have to share the blame. The way we use oil and other natural resources in this country is unsustainable and puts us in a terrible bind in so many ways."

The first thing Richert learned when she tried to give up oil, she says, "was that it would be impossible unless I made some major changes in my way of life — changes I wasn't ready to make at the drop of a hat." 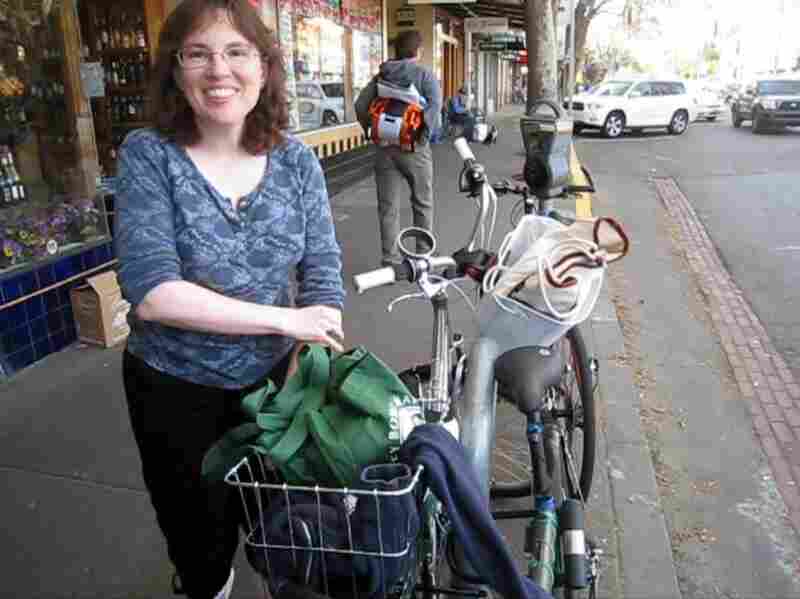 Beth Terry of Oakland, Calif., doesn't own a car and takes her bike out to do shopping. She keeps tallies of her plastic waste on her blog. Courtesy of Beth Terry hide caption 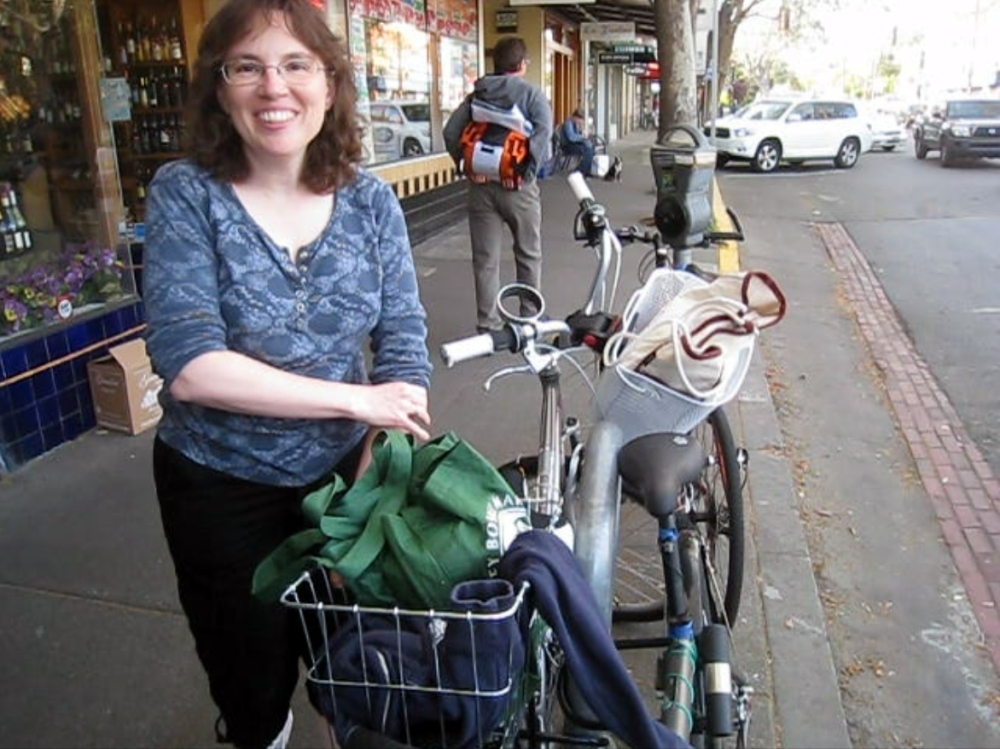 Beth Terry of Oakland, Calif., doesn't own a car and takes her bike out to do shopping. She keeps tallies of her plastic waste on her blog.

Driving a car, for instance. "I've definitely noticed the [gas] prices rising again," she says. "But I feel that as long as I'm still driving, I will have to pay the price. In the long run, I plan to work in or near my home, so I won't be so vehicle-dependent."

Over the past year, Richert has tried to curtail her oil and energy consumption. "I've cut back the amount of plastic I use. I've converted to about 97 percent vegetarian, I buy locally produced food maybe 65 percent of the time, and I sincerely try not to drive when I don't have to," she says. "I'm also trying to grow my own produce at home, which is interesting since I'm not a very experienced gardener. But if it's worth doing, it's worth the risk of failing, right?"

On the other side of the country, Beth Terry of Oakland, Calif., has at least reached a point where she is not paying ultra-close attention to the higher plateauing prices at the gas pumps. "I don't follow petroleum prices because, while I am not oil-free, I don't depend on it much," says Terry, a 46-year-old accountant. "We don't own a car, but do borrow Zipcars — car-sharing — a few times a year. We ride our bikes and take the Bay Area Rapid Transit."

Terry was forced to take several airplane trips at the beginning of the year to be near her dying mother. "I felt conflicted about that," she says. "Not that I wouldn't have done it! I just felt sad to have to use so much fuel."

After all, Terry says, "oil is a nonrenewable resource. It either comes from overseas or it must be extracted here at home, often creating catastrophes like the Deepwater Horizon spill."

Beth Terry of Oakland, Calif. keeps tallies of her plastic waste and writes about her adventures on her blog, My Plastic-free Life. Here are some of the steps she says she's taken to reduce her plastic and oil consumption.

Watch Beth Terry speaking last fall at a TEDx Conference about minimizing plastics in her life.

For Terry, the issue is not just the unslakable American thirst for oil, "but all fossil fuels, as far as I'm concerned. I don't want it to sound like I eschew oil but give natural gas and coal a pass. In fact, many plastics are made from natural gas as opposed to oil. But wars are not fought over natural gas. I guess that is the big difference."

In her home, Terry uses baking soda, vinegar, plain soap and other cleaning and personal care products that are petroleum-free. "There aren't many petrochemicals in our home," she says. "And, of course, there's the no-plastic thing that I've been doing since 2007." She keeps tallies of her plastic waste and writes about her adventures on her blog, My Plastic-free Life.

She is trying to eat food that requires less transportation. "I've just begun a little plastic-free organic veggie garden in my front yard," Terry says, "but we buy most of our produce from the farmers market, and it does have to be trucked there. We only buy organic produce, beans, grains and dairy. But we also eat in local restaurants sometimes where the food is not necessarily organic, and who knows where it comes from?"

Terry works hard at her elusive dream of oil-lessness. "Anything I order online requires fuel to ship," she says. But she says she does receive a lot of plastic-free product samples to review on her blog. Over the years she has featured, among other things, rubber flip-flops, a stainless steel lunch kit and wine bottles stopped with natural corks.

The desire to be liberated from oil's omnipresent grip is set against a backdrop of America's love-hate relationship with energy.

There are conspiracy theorists who believe the government and big business are in cahoots to keep the country tethered to the gas pump. There are the drill-baby-drill proponents who believe that untapped oil and gas could lead to energy independence. And there are peak-oil believers who say there just is not enough oil left to meet the burgeoning demand.

The National Petrochemical and Refiners Association, a Washington lobbying group that promotes the use of petroleum, points the finger at the Obama administration for actively advocating energy policies — such as higher taxes, the cap-and-trade energy plan and thwarting domestic oil production — that "explicitly call for increasing consumer energy costs."

When Charles Drevna, president of the group, is asked what he tells people who are trying to use less petroleum, he says: "We believe in energy conservation, mass transit and improved fuel mileage for vehicles. We believe that if all forms of energy compete on a level playing field, consumer choice and the free market will determine the energy sources that best serve the needs of the American people."

Poll after poll show that Americans — on the right and the left — believe we should consume less fuel. Some maintain it is a national security concern; others say it is an environmental issue.

On a macro level, says Phyllis Cuttino, director of the Clean Energy Program at the Pew Charitable Trusts, "America needs to get started and do many things to address our dependence on oil, particularly in the transportation sector: Make cars and light trucks more efficient, encourage the deployment of electric vehicles and plug-in hybrids and their necessary charging infrastructure, and invest in the development of advanced batteries and biofuels and renewable energy."

She adds, "An admiral I know is fond of saying, 'When it comes to energy, there is no silver bullet — there is only silver buckshot.' "

And so on a micro level, people are trying — in silver buckshot ways — to adjust their habits to the higher price of gas. Yet even those who carry on the most ascetic, pared-down existence depend on petroleum in some form or other.

No one is sure just how many Americans live off the national public-utilities grid — relying on generators or alternate energy sources such as solar, wind and geothermal. In his 2010 book Off the Grid, Nick Rosen estimates that up to 520,000 households and up to a million people are living off the grid.

If anyone is going to be living oil-free, it would probably be an off-gridder. But Rosen, who runs the Off-Grid website, says that in all his travels he has never met anyone who has achieved personal energy independence.

Most off-gridders, Rosen says, have radically reduced their energy consumption, "to the point where high energy prices are not a substantial part of their weekly budget — even if they are using heating oil."

Many are living electricity-free, Rosen says, "but even for those who live off-grid, oil is far too pervasive to be possible to cut it out altogether."

He says, "Most have cars, and those who travel by horse and buggy, such as the fast-growing Amish population, still have everything from motor-driven agricultural equipment to lubricants for their air-powered industrial equipment."

James Howard Kunstler, a writer in upstate New York, has thought a lot about America's longtime dance with oil. In 2005, he wrote The Long Emergency about a coming permanent oil crisis, among other catastrophes. And in 2008 he wrote World Made by Hand, a futuristic novel about post-oil America.

"Sure, people can make changes in their lives: grow some of their own food, move where they live from a [mucked]-up place to somewhere more favorable, change vocations or trades, raise chickens, eschew debt," says Kunstler from his home in Saratoga Springs. But "I'm serenely convinced that most people won't."

When it comes to people and petroleum, Kunstler subscribes to a very pessimistic theory of human behavior. He puts it this way: "People will do what they do — until they can't."