Accessibility links
Psst! The Human Brain Is Wired For Gossip Learning negative information about people can change the way you see them — literally, according to a new study. It's an unconscious response orchestrated by your brain's visual processing system, and it may have helped early humans exploit gossip to get ahead. 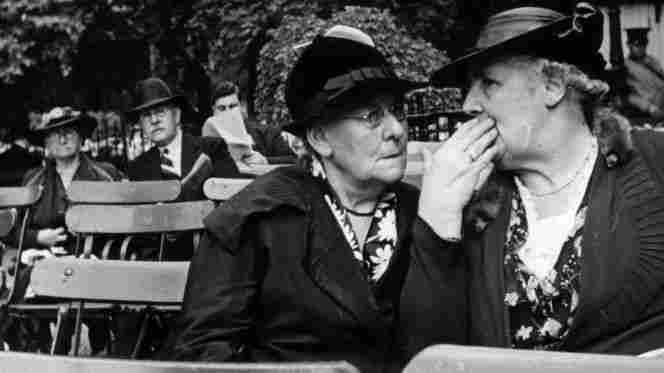 Learning juicy details about someone can change the way you see them — literally, according to a new study. August Darwell/Getty Images hide caption

Hearing gossip about people can change the way you see them — literally.

Negative gossip actually alters the way our visual system responds to a particular face, according to a study published online by the journal Science.

The findings suggest that the human brain is wired to respond to gossip, researchers say. And it adds to the evidence that gossip helped early humans get ahead.

"Gossip is helping you to predict who is friend and who is foe," says Lisa Feldman Barrett, distinguished professor of psychology at Northeastern University and an author of the study.

Barrett is part of a team that has been studying how gossip affects not just what we know about an unfamiliar person but how we feel about them. The team has shown that getting secondhand information about a person can have a powerful effect.

But Barrett and her team wanted to answer another question: Once hearsay has predisposed us to see someone in a certain way, is it possible that we literally see them differently?

That may seem like a strange thing to ask. But it makes sense when you consider that the human brain has a whole lot of connections between regions that process visual information and areas involved in our most basic emotions, Barrett says.

Then the researchers looked to see how the volunteers' brains responded to the different kinds of information. They did this by showing the left and right eyes of each person very different images. So one eye might see a face, while the other eye would see a house.

These very different images cause something called binocular rivalry. The human brain can only handle one of the images at a time. So it unconsciously tends to linger on the one it considers more important.

And the researcher found that volunteers' brains were most likely to fix on faces associated with negative gossip.

"Gossip doesn't just influence your opinions about people, it actually influences how you see them visually," Barrett says.

The finding suggests we are hardwired to pay more attention to a person if we've been told they are dangerous or dishonest or unpleasant, Barrett says.

"If somebody is higher than you in the food chain, you want dirt about them. You want negative information, because that's the stuff you can exploit to get ahead."

Other scientists say that makes sense from an evolutionary perspective.

"I was actually pretty excited to see this paper," says Frank McAndrew, a professor of psychology at Knox College in Galesburg, Ill. "For years, people like me have been saying that our intense interest in gossip is not really a character flaw. It's part of who we are. It's almost a biological event, and it exists for good evolutionary reasons."

Even when primitive humans lived in small groups, they needed to know things like who might be a threat and who was after a particular mate, McAndrew says. And learning those things through personal experience would have been slow and potentially dangerous, he says.

So McAndrew says one shortcut would have been gossip.

"People who had an intense interest in that — that constantly were monitoring who's sleeping with who and who's friends with whom and who you can trust and who you can't — came out ahead," he says. "People who just didn't care about that stuff got left behind."

And it makes sense that our brains pay special attention to negative gossip, McAndrew says.

"If somebody is a competitor or somebody is higher than you in the food chain, you want dirt about them," he says. "You want negative information, because that's the stuff you can exploit to get ahead."