Accessibility links
Gingrich Backpedals On Medicare Comments In Iowa Newt Gingrich's run for president has had a rocky start, and he has been engaged in damage control all week. On Sunday, the former House speaker infuriated fellow Republicans when he called House Budget Committee Chairman Paul Ryan's plan for revamping Medicare "radical." 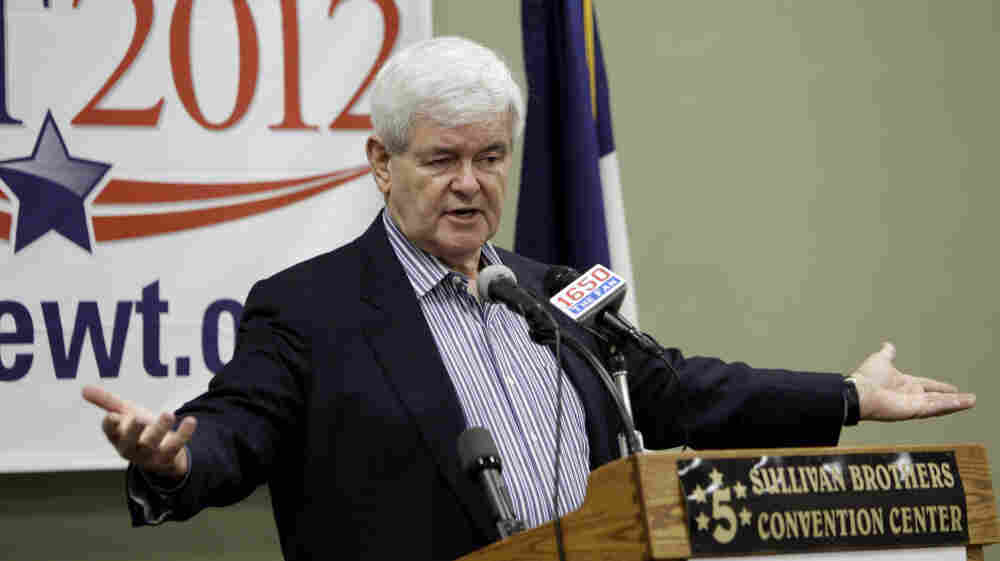 Former House Speaker Newt Gingrich speaks to local party activists Thursday in Waterloo, Iowa. Gingrich says his campaign is alive and well despite an angry response by some Republicans to earlier comments he made about a House Republican plan to dramatically change Medicare. Charlie Neibergall/AP hide caption

Newt Gingrich's run for president has had a rocky start, and he has been engaged in damage control all week. On Sunday, he infuriated fellow Republicans when he called House Budget Committee Chairman Paul Ryan's plan for revamping Medicare "radical."

Gingrich was campaigning in Iowa Thursday, and a standing-room-only crowd turned out at the Marshalltown Public Library to hear the former House speaker aim rhetorical bombs at the president.

That kind of verbal flame-throwing is what got Gingrich in trouble Sunday when he attacked Ryan's Medicare plan on Meet the Press, calling it "right-wing social engineering."

"I don't think imposing radical change from the right or the left is a very good way for a free society to operate," Gingrich said.

From Flame-Throwing To Diplomacy

Gingrich has been backpedaling all week. He apologized directly to Ryan, held conference calls with conservative bloggers and even explained himself on Rush Limbaugh's show.

By Thursday, when the House Republican plan to give future Medicare beneficiaries vouchers to buy private insurance came up, Gingrich was careful — diplomatic, even.

"We need a better Medicare program," Gingrich said. "I think Paul Ryan has begun that conversation."

Rich Galen, who worked for Gingrich when he was speaker, says the grandiose overstatement is a Gingrich signature.

"Here's what we know about Newt — that when the adrenaline starts flowing, he will go back to his basic stance, which is to state his position in the starkest possible terms, drawing the most broad differences between his position and his opponent's position," Galen says.

Only in this case, his opponent was another Republican, whose Medicare plan got the votes of all but four Republicans in the House. That crossed a line for many conservatives in Washington, D.C.

In Dubuque, Iowa, Russell Furman confronted Gingrich: "Mr. Gingrich, what you just did to Paul Ryan is unforgivable."

"I didn't do anything to Paul Ryan," Gingrich answered.

"Yes, you did," Furman shot back. "You undercut him and his allies in the House."

Gingrich tried to respond, but Furman cut him off, saying, "You're an embarrassment to our party."

I wish one of the people who was predicting my demise would just come out and spend a day or two on the road, and they'll understand. The pundits actually don't decide the election. The American people do. And I'm out here with the American people, and the water feels just fine.

Gingrich has few defenders inside the Beltway, where Republicans seem to have run out of patience with his behavior.

But in Ames, Iowa, Gingrich spoke to another packed house, where Polly Bailey and Jim Lohr found him both frustrating and impressive.

"He's Newt being Newt," Bailey said. "He's a great idea man. I don't know, it takes a light touch if you're going to govern."

"Newt is brilliant," Lohr said. "There is no question about that. Sometimes he needs to be more careful about how he phrases things."

Gingrich himself says he knows voters will decide whether he has the discipline and judgments to be president. In an interview Thursday, he was selling his liabilities as an asset.

"If you are an ideal-oriented political figure, if you're somebody who passionately believes that we need a national conversation, and it has to be real, and it has to touch things that are dangerous, you're occasionally going to get in trouble," Gingrich said.

For many Republicans, the unforced errors say a lot about Gingrich himself. But for Democrats, the reaction to Gingrich's comments say even more about the GOP and its determination to dismantle Medicare.

Gingrich was clearly trying to recast the Medicare debate. He knows the Ryan plan is unpopular with seniors. He argues that any changes in Medicare should be voluntary — seniors should be given the option of using a voucher to buy health insurance.

"If he was saying those same things as Newt Gingrich, senior thinker for Republicans and conservatives, then he could lay those things out," said Rich Galen, the former staffer. "Saying it as Newt Gingrich, looking for votes in Iowa, and looking for support in New Hampshire, it takes on a completely different tone."

Gingrich has been a senior thinker for conservatives in the years since he was speaker, and there is no reason he can't continue to be.

"The role as a candidate may not be the correct role for him," Galen said.

Gingrich, however, says he has no intention of quitting. He's had overflow crowds in Dubuque and Mason City.

"I wish one of the people who was predicting my demise would just come out and spend a day or two on the road, and they'll understand," Gingrich said. "The pundits actually don't decide the election. The American people do. And I'm out here with the American people, and the water feels just fine."

Indeed, this weekend, Gingrich will be back on the Sunday talk shows, explaining himself again.