Accessibility links
Warren Haynes: Saved By Soul Music The legendary guitarist practically ignores his guitar and instead pours out his heart in "Save Me." 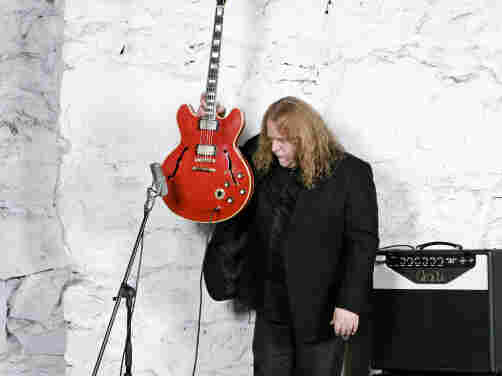 Legendary guitarist Warren Haynes practically ignores his guitar and instead pours out his heart in "Save Me." Stewart O'Shields hide caption

In a curious musical twist, Warren Haynes, the 23rd-greatest guitarist of all time according to Rolling Stone, practically ignores his guitar and instead pours out his heart in "Save Me." A compelling, self-penned cut, the song is a highlight from Man in Motion, the new album from the Allman Brothers alum and Gov't Mule co-founder.

The 51-year-old Haynes wrote the song at a low point in his life: A relationship had ended, and he'd just moved to a new city. An empathetic organ sings backup behind the piano's sturdy chords, conjuring up David Ruffin's grand, gospelized Motown single of 1970, "I'm So Glad I Fell for You." On occasion, Haynes offers a subdued and mournful guitar riff, but the song's focal point is his plaintive voice, tinged with despair yet still harboring a hint of hope. Along the way, he asks questions of either a wandering lover or the Lord he'd abandoned: "If I needed you, would you come to me? / If I was lost, would you comfort me?"

Clearly influenced by generations of soul music, Haynes sings words sung by many a soul star before him, but he doesn't come off as a poseur or a play-actor. Instead, he sounds like a humble disciple, laid bare as he issues a simple, honest, emotive plea.

Sign Up: Song Of The Day Newsletter
Warren Haynes: A Rocker Gets Some 'Me' Time May 6, 2011