Accessibility links
How NBC's 'The Voice' Is The Anti-'American Idol' You may think all singing competition shows are the same, but as critic Eric Deggans sees it, NBC's new entry, The Voice, is a counterpoint to exactly the things people complain about with American Idol. 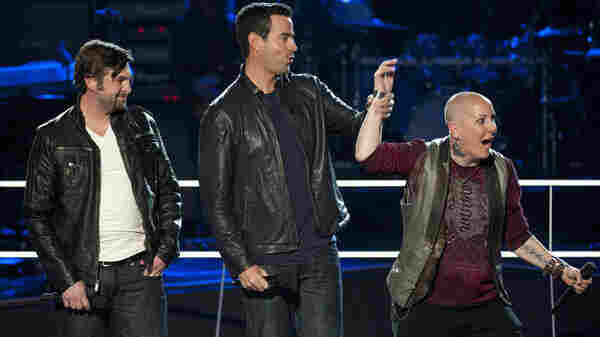 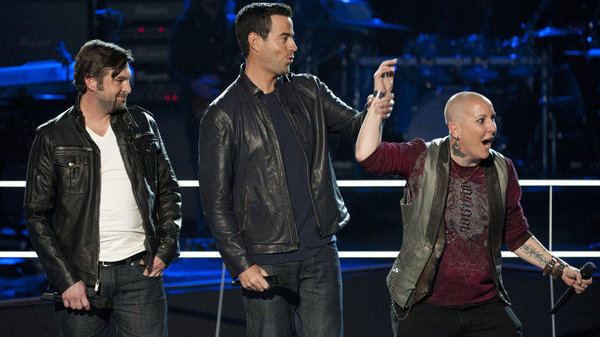 Justin Grennen looks on as Carson Daly signals a recent victory for Beverly McClellen on NBC's The Voice.

If you're a reality TV snob, maybe you think one hyped-up singing competition is just like any other.

But from the start, NBC's The Voice seems built as an answer to complaints about American Idol. And now they have emerged as mirror images of each other.

One of the biggest knocks on Idol is that great singers lose if they don't have an Idol-extruded generic popularity. Even the show's judges lamented the early departure of one of Idol's best singers this year, the charisma-challenged Pia Toscano.

NBC tossed that all away. The Voice wants to make the point that musicianship comes first so boldly that the judges face away from prospective singers in the first round.

Another factor at play is Idol's pervasive and ever-increasing focus on youth. It's going into the finals next week with both contenders who are still in high school: Scotty McCreery, 17, and Lauren Alaina, who was just 15 years old when she auditioned.

But The Voice has standout rocker Beverly McClellan, 41. Onetime Idol contestant Frenchie Davis is 31 and grizzled soul crooner Nakia is 36.

In fact, The Voice has placed bald, aging lesbian rocker McClellan and gay belter Nakia front and center in their commercials. They are living examples of the show's anti-Idol attitude. On Idol, the only time gay contestants talk about their sexuality on the show is after they've left; yes, Adam and Clay, I'm talking about you.

Still, the most important component for each program is the judging. On Idol the new judges have become relentlessly positive cheerleaders, using the show to re-ignite their careers. Ryan Seacrest helps Steven Tyler shill his new book and Jennifer Lopez has a new single to promote.

The Voice offers real working musicians as judges, presenting valuable advice to teams of singers. They talk about things like breath control, restraint, blending harmonies and other technical issues that rarely come up on Idol.

The pros of The Voice are pop stars of the moment; from country star Blake Shelton and pop diva Christina Aguilera, to Maroon 5 lead vocalist Adam Levine and eccentric R&B singer Cee Lo Green. And their easy banter feels like hanging backstage with the coolest musicians on the planet. It's just fun to hear Shelton rib Cee Lo for dressing like a peacock or Cee Lo's half-serious contention that he knows about country twang because he's from Atlanta.

Now for the big surprise: different as they are, both shows have succeeded. Together, they provide viewers a rare look at two sides of the pop music coin, from watching Idol mint an inoffensive all-around pop star personality to seeing The Voice try focusing mostly on musical ability.

Indeed, The Voice may be the first time someone has figured out how to echo American Idol while directly answering its flaws.

And since imitation is the sincerest form of television, I bet it won't be long before NBC and Fox plenty of company.