Accessibility links
Marvin Gaye's 'What's Going On': Songs We Love What's Going On was an instant classic, as well as one of the most influential records from a passionate and enduring icon. Read NPR staff members' reflections on its legacy. 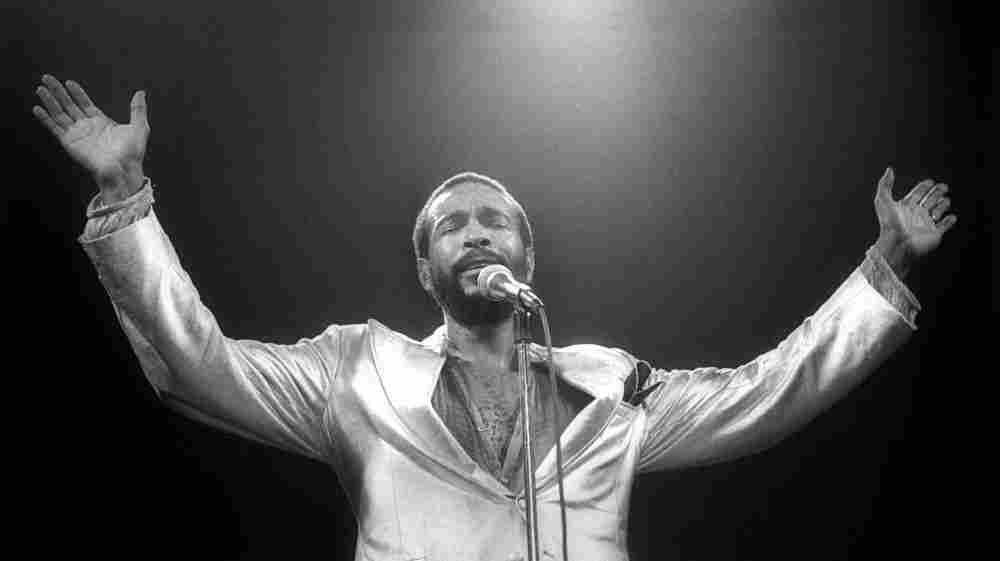 Marvin Gaye's masterpiece What's Going On turns 40 on Saturday. Click the link above to hear Gaye biographer David Ritz evaluate the album and its legacy on Weekend Edition Saturday.

Marvin Gaye's What's Going On was an instant classic, as well as one of the most influential records from a passionate and enduring icon. Released on May 21, 1971, the album is an introspective, politically charged nine-piece song cycle that addresses the ravages of the Vietnam War, urban decay, drug abuse, civil unrest and injustice. Gaye was singing to his generation in an effort to wake people up to the struggles no one was willing to discuss at that time. But these songs are universal; they've transcended their time and place. Listen carefully and you'll notice how much they still resonate.

While What's Going On ranks among the best R&B records to so openly and artfully reflect such social consciousness, it was not the last of its kind. What's Going On has become a template for how to marry a strong message with a pop sensibility in order to reach as large an audience as possible. Gaye's songs are filled with sophisticated yet instantly recognizable hooks and languid, jazz-inflected funk grooves that would keep anyone dancing and singing along. If it weren't for Gaye's skillful songcraft, his message might have been lost. Thankfully, 40 years later, this music lives on.

In honor of the 40th anniversary of What's Going On, Motown is reissuing a new "Super Deluxe Edition" of the record, complete with unreleased tracks and rarities. Most of these songs will be immediately familiar, so NPR Music has assembled a panel of Marvin Gaye fans to reflect on the album and its legacy. 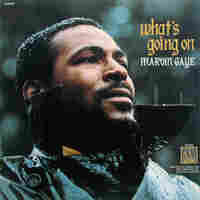 "Oh, you know we've got to find a way / Bring some understanding here today..." I never owned "What's Going On," on 45 or LP. As a kid on Chicago's West Side, I didn't have to; the song was everywhere. Singles with a message by James Brown, The Temptations and countless other African-American artists were available and on the charts and jukeboxes. But Marvin Gaye's title track was message music with a difference. It was an overture and an anthem. From its warm greetings between black men to the steady slap and patter of the congas — and with Gaye's vocals, which glided from sorrow into soaring at the bridge — "What's Going On" was and still is a poetic plea for justice and contemplation within black communities. (The whole world could stand to tune in, as well.) Forty years ago, Gaye found a way to offer up a prayer in the form of a powerful question with an equally ringing affirmation.

Growing up, my mom was "all Motown, all the time," so I knew well the Marvin Gaye who sang love songs and duets with Tammi Terrell. But, as a kid, I wasn't tuned in to the Marvin Gaye who became more socially conscious after Terrell's death. As I got older, though, I grew to appreciate the album What's Going On, because musically it was so much different from what he'd done before; the arrangements and lyrics still blow me away. "What's Happening Brother" is the second track on the album, and you can almost see the "brother" Marvin is singing about walking down the street, dapping up friends — "Hey baby, what you know good?" — and standing on the corner shooting the bull about how life in the neighborhood changed while he was gone to war. "Are they still getting down where we used to go and dance?" "Will our ball club win the pennant, do you think they have a chance?" "Can't find no work, can't find no job, my friend. Money is tighter than it's ever been." Listening to the song today makes me think about soldiers returning home from Iraq and Afghanistan who are trying to step back into the life they left behind. "What's been shakin' up and down the line? I wanna know, 'cause I'm slightly behind the times."

Flyin' High (In the Friendly Sky)

When I was 2, my dad took a photo of me squirming rhythmically across our yellowing carpet and flashing a delighted grin at the camera. Spinning on the record player behind me was undoubtedly "I Heard It Through the Grapevine" from Marvin Gaye's Greatest Hits. Played night and day throughout my childhood, the album solidified a love affair with soul that has endured in the decades since. Had I been listening to "Flyin' High" at the time, I might have been just as won over by the eminently smooth vocals alone. Today, I can also admire the way Gaye laces the track with spacious breaks that help project the plaintive words. The pairing transmits his hopeful optimism that anyone, no matter his or her age, can appreciate.

In "Save the Children," Marvin Gaye speaks, and he echoes himself in song. He calls — and only he responds. He's absolutely surrounded by strings and a muted chorus, but it feels like he's yelling on a corner and no one will look him in the eye. So the song gets more and more urgent, the layers piling up and the pace building to the words, "Save the babies, save the babies." He strains, loses his cool and then just as quickly catches himself. He leans back to give us a chance to catch our breath, to let the funk in, asking as he goes, "But who really cares?" It's a trick, and it mimics the way we all agonize about other people's pain in spasms, twinges easily distracted by a funky bassline. Gaye doesn't let go all the way. The chords go minor at intervals, and worry haunts the song as his voice walks the line between the groove and the sermon.

Every great team has its role players. "God Is Love" is only 102 seconds long, but it's a key pivot between the previous pairs of songs and the rest of What's Going On. After the stoned waltz of "Flyin' High (In the Friendly Sky)" and the anguished cries of "Save the Children" (which basically say that this generation is irredeemable, so let's pray for the next), the lazy-afternoon funk of the first two tunes returns in redemptive praise. There's so much love here, it takes two Marvin Gayes to deliver the message, a powerfully generous statement of faith sung with the kind of musical relaxation few have managed before or since. The song ends with one of the great quick-cut edits in pop: an abrupt descent into "Mercy Mercy Me (The Ecology)," an overflowing spoonful of sugar that helps environmental medicine go down. But no matter how bad things may get, we've been convinced that the man upstairs is on our side.

This album holds serious vinyl memories for me. "Mercy Mercy Me (The Ecology)" was the last song on the first side, and I always rigged up an analog "repeat" by adjusting my turntable to play Side A over and over. The song book-ended one of the most powerful and impressive album sides in pop music. Legend has it that what Motown head Berry Gordy Jr. didn't like about the album was not the political poetry of the songwriting, but instead the five-song suite that flowed from one song to the next. Gordy was thinking of singles and radio play; Gaye was thinking of a grand statement about the world and all that was wrong with it. But it's hardly a thing of the past. Listen again to the words: Have things really changed that much? I hear references in "Mercy Mercy Me" that could just as easily point to the oil spill in the Gulf and the recent nuclear crisis in Japan. It's hard to imagine any other song that still holds so many lessons for us, let alone in a mere three minutes and 12 seconds.

From the first time I heard "Right On" and that beat, the groove resonated with my soul. I was too young to understand its message then, but the album was one you heard everywhere where I grew up: at a BBQ down the block, blasting from the stereos of cars as I walked down the street, bouncing off the walls in my college dorm from a room down the hall. This was back when people played the whole album as opposed to just downloading a single or two. You would put it on the turntable, sit back and feel the vibe. And with lines like "Love can conquer hate" or "Oh, when we love each other, I know that's all right," Gaye showed an understanding of what should be clear to everyone: "For those of us who tend the sick and heed the people's cries, let me say to you, 'Right on.' " Yeah.

I bet I'm not the only one who came to know "Wholy Holy" from Mavis Staples' jaw-dropping performance of the song on The Cosby Show in 1990. Aretha Franklin made her own famous rendition with a booming voice and gospel choir, but Gaye's version is different: It's a one-man devotional, filled with quiet contemplation. He even sings the background vocals himself, serving as his own call-and-response, simultaneously questioning and affirming his faith. In the end, there is no doubt that holiness is not a disembodied sacred state. It's made evident when people come together and believe in one another.

It you listen to "Inner City Blues (Makes Me Wanna Holler)," you can almost see the bodies slow-dancing at an overcrowded rent party. Maybe it's Detroit, Chicago, Harlem, Washington or even Memphis. But it's crowded, and everyone's working on a buzz. If you breathe deep, you can get a contact high. This slow jam should be a love song, or at least about sex, but it's about markets, money, police brutality. I can almost imagine the letter Berry Gordy must have written to Marvin Gaye: "How are the kids going to dance to the line, 'Trigger happy policing' Stop!" But the kids did dance to it. It went to No. 9 on the charts. In the last few months, I've been playing What's Going On when I drive around Detroit. When I look at the city and hear "Inner City Blues," I wonder how many people listened, and how many just danced.