Accessibility links
Louisiana Refinery, Residents Gird Against Flood Mississippi River floodwater is predicted to start flowing in Krotz Springs, La., on Monday. To prepare, the oil and gas industry is shutting down wells and stabilizing equipment. Many residents who returned last week are ready to leave again on short notice. 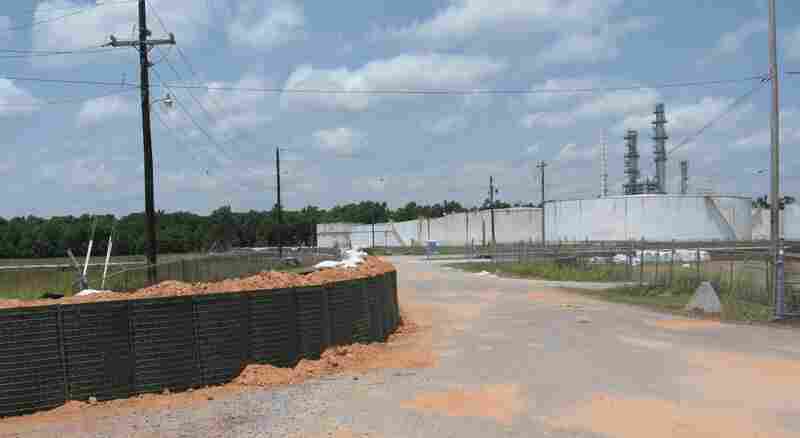 The National Guard constructed a 2-mile temporary levee around the ALON USA refinery in Krotz Springs, La., and a neighborhood on the south side of town. Jeff Brady/NPR hide caption 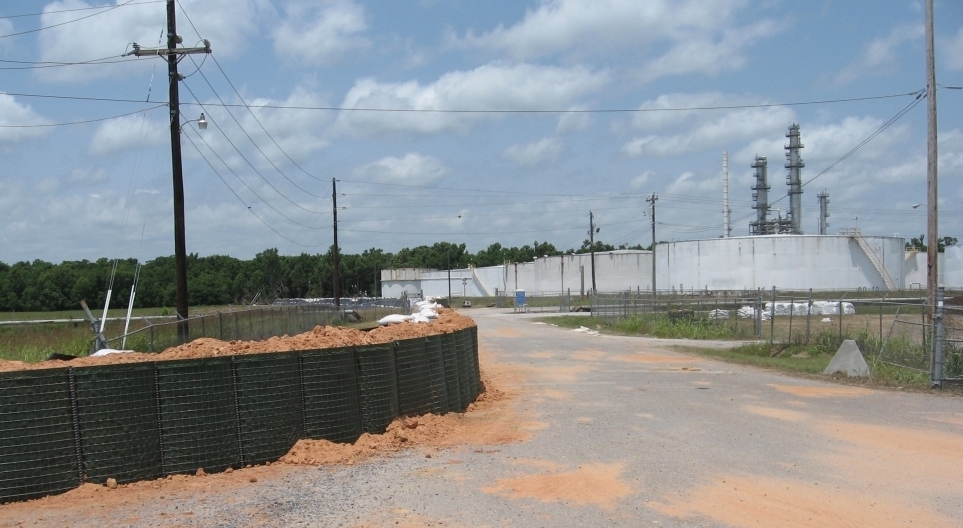 The National Guard constructed a 2-mile temporary levee around the ALON USA refinery in Krotz Springs, La., and a neighborhood on the south side of town.

In Krotz Springs, La., preparations continue as residents wait for an expected flood below the Morganza Spillway.

The Louisiana Department of Natural Resources says there are 592 oil- and gas-producing wells in the path the water is expected to follow down the Atchafalaya Basin.

"Operators are typically reporting that they are making preparations as they would for a hurricane event," says department spokeswoman Anna Dearmon.

Companies are emptying tanks of petroleum and filling them with water to keep them stable during flooding. Dearmon also says operators must install automatic cutoffs for wells that might become inaccessible during bad weather or a flood.

At the ALON USA refinery in Krotz Springs, crews quickly constructed a levee on the south side.

"The refinery is a key piece of infrastructure around here," says Lt. Col. Daniel Bordelon with the Louisiana National Guard. "A lot of the people here work at the refinery, so they would have lost their jobs if the refinery went down."

The Gulf is still reeling from the BP oil spill last year. I think it's sad for all of us to see there's potentially going to be more contaminants in the Gulf.

Bordelon says crews built a total of two miles of levee in just five days."We ended up using about 60,000 cubic yards of material," Bordelon says. "If you stack dirt 12 to 15 feet wide and 8 foot tall over two miles, that's what we did."

While that may keep the refinery operating, others are worried about the environment.

Anna Hrybyk with the Louisiana Bucket Brigade worries floodwater flowing through Atchafalaya Basin will collect toxic chemicals from the many petroleum production sites there.

"The Gulf is still reeling from the BP oil spill last year," Hrybyk says. "I think it's sad for all of us to see there's potentially going to be more contaminants in the Gulf."

For people in Krotz Springs, the concerns are more immediate. Many of the town's 1,200 residents left early last week, assuming flooding was imminent. But when the water didn't come right away, people started trickling back.

Photos: Come High Water, Homemade Levees May Save The Day

Darlene Walker returned to find water bubbling up from the ground in her side yard, and water gushing up from her well.

She lives a quarter mile from the levees that keep the Atchafalaya River within its banks. All the extra water flowing by apparently has raised groundwater levels.

Walker says she's ready to leave on short notice if the water starts heading her way.

"We [are] still living out of our suitcases," Walker says. She says she worries about getting stuck in floodwater. "My husband had three strokes and I got my son-in-law in a wheelchair next door."

She hopes this flood won't be like the one in 1973, when there was 5 feet of water on her property.