Accessibility links
Egypt, Uncensored: A New TV Station Tackles Injustice Staffers at 25TV, a newly founded 24-hour news and entertainment station, say their goal is to cover the stories Egyptian state television wouldn't touch. It may be unpolished, but the the people working there all backed or participated in the revolution, and want to cover stories that get ignored. 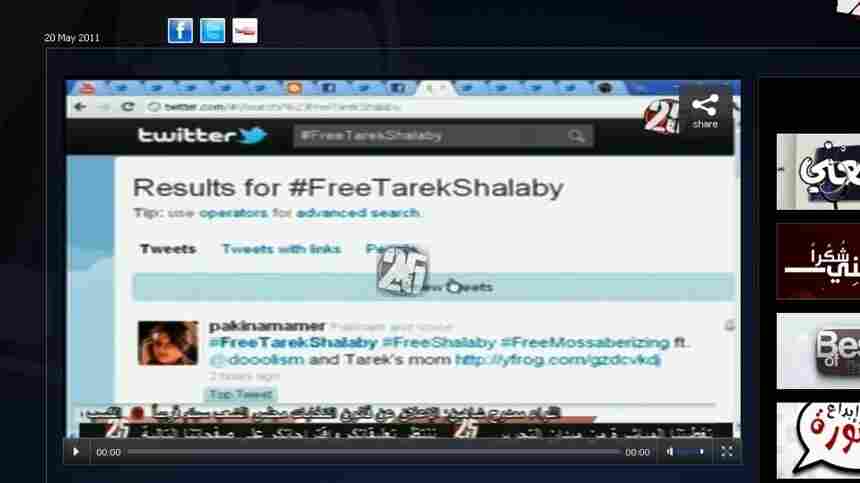 The newly founded Egyptian news channel 25TV broadcasts online at 25online.tv. In this image from a show called Hashtag, the host discusses the Twitter hashtag #FreeTarekShalaby, which began after Shalaby, an Egyptian activist, was arrested during protests outside the Israeli embassy in Cairo. He was later released. 25TV hide caption 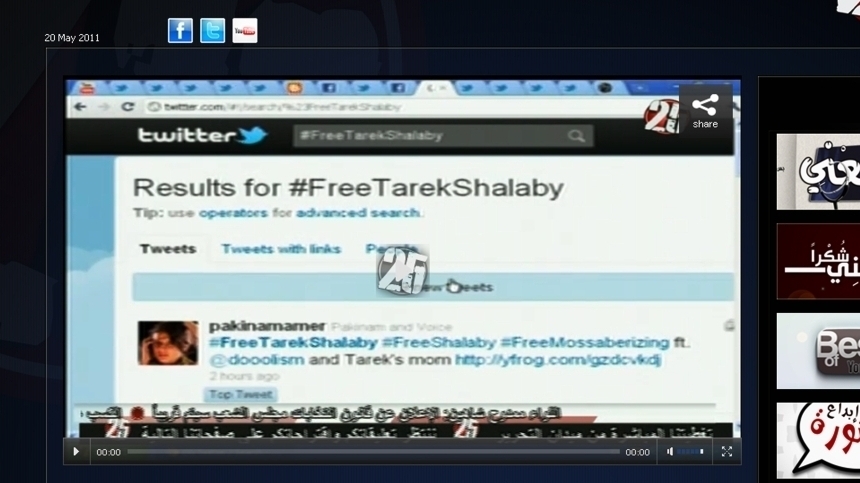 The newly founded Egyptian news channel 25TV broadcasts online at 25online.tv. In this image from a show called Hashtag, the host discusses the Twitter hashtag #FreeTarekShalaby, which began after Shalaby, an Egyptian activist, was arrested during protests outside the Israeli embassy in Cairo. He was later released.

The revolution in Egypt now can be seen on the country's satellite television network in the form of a 24-hour news and entertainment channel. 25TV's programming is not always polished, but it is honest and uncensored — at least most of the time.

Its approach to coverage is unique in a country where the government has strictly controlled the news for decades. In fact, staffers joke that their goal is to do all the stories that Egyptian state television won't touch.

And while Egyptian television hosts are usually quite suave, 25TV's Seif Khirfan is not.

The 29-year-old trauma surgeon-turned-television personality ambles around a small Cairo fairground in sneakers and a polo shirt. The place is packed with people who've come to take part in a new, weekly gathering called the "Bank of Ideas."

"Since the revolution, people have had an overflow of good ideas for the future," Khirfan explains. "So they decided to make, like, an organization where they collect all ideas from everyone who wants to pitch in."

Khirfan is eager to share this find on his show, "Samani," which means "let me hear" in Arabic. But there's a slight problem, he says, looking over at a couple of cameramen standing a few feet away.

"First I have to find my camera crew," Khirfan says. The cameramen standing near him aren't for his show. "They already have their presenter," he laughs.

Khirfan's thrice-weekly program on 25TV is making him a familiar face among Egyptians, especially since his recent, up-close look at smuggler tunnels between Egypt and the Gaza Strip. In the past, Egyptian media couldn't have gotten near those tunnels, let alone reported on them.

[The bigger networks] are not going to talk about when the police kick out the merchants of Ramses Square ... But for one of our producers, Abdul Rahman, he cares ... He knows street merchants, so he cares and he goes.

Joe Lukawski, a cameraman for 25TV

But fame hasn't translated into funds for the station — at least not yet. That makes sharing a necessary inconvenience, Khirfan says.

"We shuffle crews, we shuffle equipment, so every time I have to explain the concept of my program all over again," he says.

What they lack in equipment and organization, the employees say they make up for with determination and drive since they started broadcasting on the Internet in March.

Its director, Mohamed Yousri, says its pursuing ad revenue to help fund the station, which has already blown through much of its $3 million start-up budget.

'The Aftermath Of The Revolution'

Many of the 45 staffers have no journalism experience. Besides the surgeon, there's a poet and an actress. All backed or took part in the uprising that ousted Hosni Mubarak.

"We thought that the channel is a good idea to represent the aftermath of the revolution," says Jaylan Auf, a producer. "Not just what happened during the revolution, but also the aftermath, where we are going next, so not to always cry over spilled milk."

American cameraman Joe Lukawski is one of two foreigners who work for the Egyptian station. He says its aim is to give Egyptians a voice they've never had before and to expose injustices that may be too trivial for bigger networks to care about.

"They are not going to talk about when the police kick out the merchants of Ramses Square," Lukawski says. "Who cares? But for one of our producers, Abdul Rahman, he cares, you know? He knows street merchants, so he cares and he goes, and we got arrested and we got in deep [trouble] on that story, but in the end we got the story."

But not everything the staff reports gets on air, like a piece by the trauma surgeon, Khirfan, on a military crackdown on protestors last month. Khirfan says he was outraged at first when station officials told him they wouldn't air the program because they feared it might spark tensions, especially because his piece focused on the military attacking army officers who joined the protest, Khirfan says. So he took a different track.

"So instead I am creating an episode now ... Like who are those officers? Are they heroes? Are they traitors? Why did they join? Where are they now, without focusing on violence and bloody graphics, so I can get my message through not to forget those heroes, without creating tension."