Accessibility links
Doomsday Believers Cope With An Intact World Before Saturday, many believers quit their jobs, left their families and gave their savings to Family Radio, which promoted May 21 as the date for the "rapture." It's too early to know how they will cope with the failed prophecy: Some will admit they were wrong; experts say most will find a way to rationalize their beliefs. 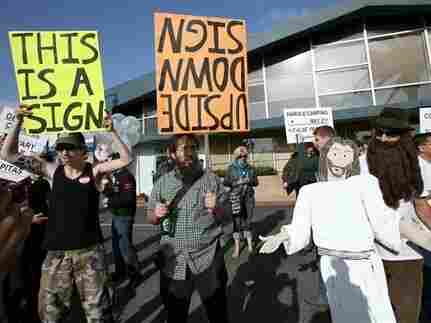 Evangelist Harold Camping's failed prediction that the world would end May 21 prompted humorous protests like this one Saturday outside the Oakland, Calif., offices of his Family Radio. But it's too soon to tell how Camping's followers will cope with the failed prophecy. Dino Vournas/AP hide caption

As recently as two weeks ago, Gary Vollmer was absolutely certain that on May 21, 2011, God would send devastating earthquakes, raise believers to heaven in the "rapture," and then destroy the world five months later. Now that it hasn't happened, Vollmer is unfazed.

True, he says, believers got some of the details wrong. But the thrust of the message is right.

"Judgment Day has come and passed, but it was a spiritual judgment on the world," he explains. "There is no more salvation. Salvation is over with. The fact is we have 153 days, and on the 21st of October, the world will end."

I had profiled several believers before May 21. The day after, most didn't answer the phone. Those who did wouldn't talk on the record. But one man, his voice quavering, said he was still holding out hope that they were one day off. Another believer asserted that their prayers worked: God delayed judgment so that more people could be saved, but the end is "imminent."

From The Two-Way Blog

'Rapture' Prophet Harold Camping Says He Had 'A Really Tough Weekend' May 23, 2011

Tom Evans was contrite. Evans is on the board of Family Radio, the organization led by Harold Camping, who calculated and promoted the May 21 date.

"I don't know where we went wrong other than that we obviously don't understand the Scriptures in the way that we should," he says.

It's very hard for us to say, 'Boy, was I stupid!' The more committed a person is to their prophecy, the more likely they are to justify that action, and to try to convince people that their belief was in some way right or good.

Camping did not answer the phone Sunday, but told the San Francisco Chronicle he was "flabbergasted." Evans hopes the group will not recalculate and announce a new date for Judgment Day. After all, the organization has done that at least once before — in 1994 — and he believes it's learned a lesson.

"This kind of thing has a long history," says Jerry Walls, an expert on eschatology, or the study of the End Times, at the University of Notre Dame.

He says there have been dozens of doomsday prophets, though most don't pinpoint a date. One of the most famous was William Miller, a farmer and amateur Bible scholar. Miller convinced many people that Jesus would return in 1844. And when he didn't, people were crushed.

"One of their followers said they 'wept and wept all night until we could weep no more,' " Walls says. There was "just this utter sense of devastation because these people had sold out. And when it did not materialize, their lives were shattered in many ways."

They eventually decided that the judgment had occurred — but it happened in heaven. From that was born a new denomination, the Seventh-day Adventists.

It's too early to know how believers will cope with Saturday's failed prophecy in the long run. Some will admit they were wrong, but experts say most will find a way to rationalize their beliefs.

"It's very hard for us to say, 'Boy, was I stupid!' " says Elliot Aronson, a prominent psychologist and co-author of the book Mistakes Were Made (But Not By Me): Why We Justify Foolish Beliefs, Bad Decisions, And Hurtful Acts.

"The more committed a person is to their prophecy," he says, "the more likely they are to justify that action, and to try to convince people that their belief was in some way right or good."

Before May 21, many believers quit their jobs, left their families and gave their savings to Family Radio, which then sent out caravans and put up billboards announcing the end. Evans, the Family Radio board member, says now that the date has passed, all they can do is pick up and move on.

"I don't know what the future holds for Family Radio or for any of us," he says. "We just have to pray that God will be merciful."

Evans says he hopes the organization will repay people who gave their money to the cause. But at this point he can't guarantee it.