Accessibility links
New Republic: No Rapture, Just Judgment Despite Harold Camping's passionate guarantee of the end of the world, May 21 came and went without a hitch. Tiffany Stanley of The New Republic expresses her disgust at media's obsession with the disappointment of believers. 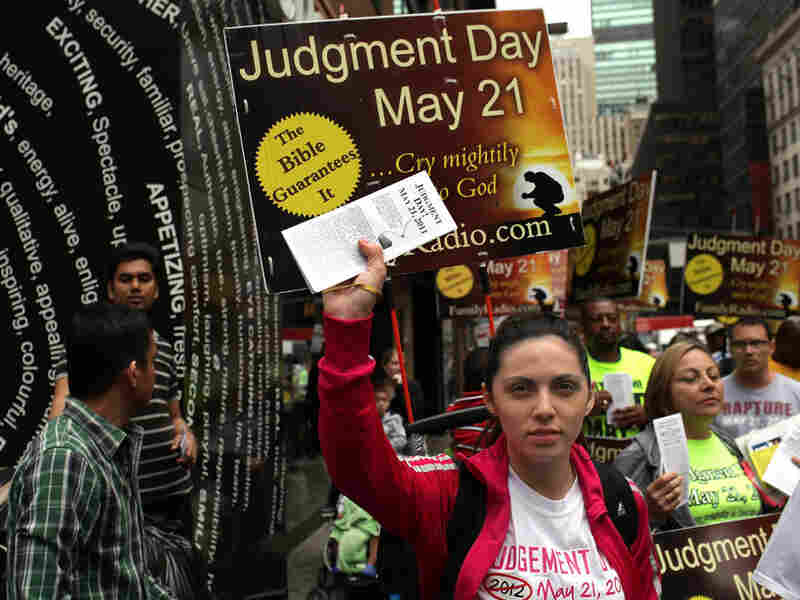 Believers in New York City hand out literature on May 13, warning that the world would end on Saturday, May 21. Judgment Day did not come but popular Google searches show a preoccupation with the disappointment of those who awaited the event. Spencer Platt/Getty Images hide caption 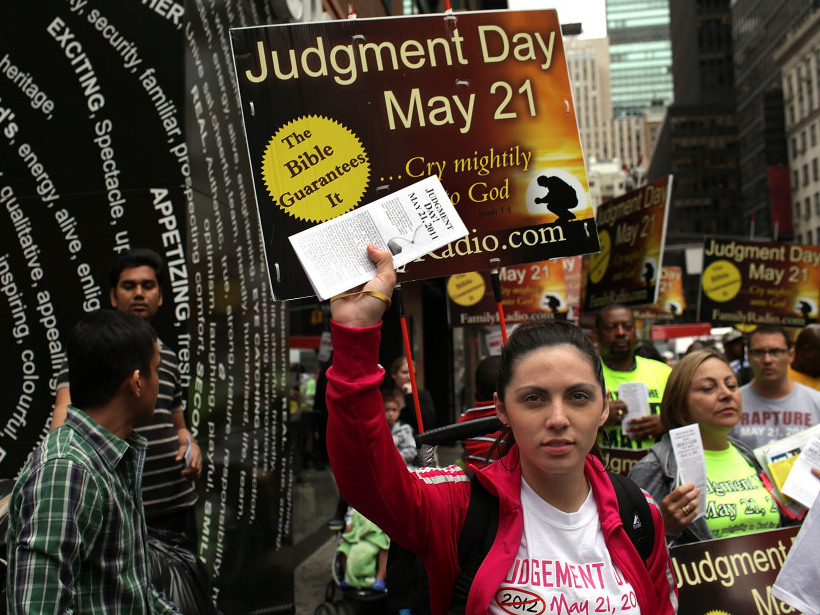 Believers in New York City hand out literature on May 13, warning that the world would end on Saturday, May 21. Judgment Day did not come but popular Google searches show a preoccupation with the disappointment of those who awaited the event.

Tiffany Stanley is a reporter-researcher at The New Republic.

The trumpets sounded. Judgment Day was upon us. At least in theory. Harold Camping — an 89-year-old former civil engineer turned radio mogul who seems to command a number of followers — had predicted Saturday, May 21 as the day of the Rapture. And the media, as well as the people who consume it, have responded with barely contained glee. Friday, references to Judgment Day made up the entire top five of Google's Hot Searches. At The Washington Post, a story about Family Radio — the Christian broadcast network that Camping owns — was the site's most popular item. Another piece, on the group's followers, was the most-emailed from The New York Times. Meanwhile, Huffington Post devoted an entire webpage to doomsday coverage, under its standard heading: "Some news is so big that it needs its own page."

Here at TNR, we thought about joining the circus. Last week, when we learned that Camping was predicting the apocalypse, I was tasked with spending May 21 — the day of the Rapture — with a few of his true-believing followers, who have been filling websites, billboards and city squares, handing out pamphlets and generally warning the world to repent. What an amazing story, I thought. I'll spend time with people who believe the world is going to end, and then be able to watch their reactions when it doesn't.

But before long, I had second thoughts. First, I ran into some accessibility snags. While the media-friendly end-timers wanted to warn heathens beforehand, they really just wanted to spend their last day on earth surrounded by loved ones, in quiet preparation. Their response to me was something like: Why would you want to follow us around on Saturday? We're not going to be here anymore. Yes, there was a certain humor to this. But the more I looked into the story, the more it began to turn my stomach to think of spending my Saturday evening in someone's living room, waiting for that gotcha moment when they realized it was all a lie — leaving me to file a story the next day, poking fun at their gullibility. I decided I couldn't do it.

Yet the media coverage has continued, and now to me, the schadenfreude has turned sinister. Based on the high traffic the articles are garnering, it would seem as if many of us are intrigued voyeurs, gleeful in knowing the exact day when these people will experience their life's greatest disappointment. We feel superior, knowing that even though they told us we were heading for death and destruction, now, they get theirs.

While some news stories have been nuanced and evenhanded, others have opted for smug superiority and cheap laughs. The Daily Beast featured "Your Guide to the End of the World," with such salient tips as "Where's the best place to weather this sucker?" (Note: avoid fault lines.) In its "comedy" section, Huffington Post made an exhaustive set of lists, from "9 Ways to Tell the World is Over" to "21 Reasons Why May 21 is NOT the End of the World" (on the latter: "Justin Bieber wouldn't let it happen"). A blog item on NPR — under the headline, "The Rapture supposedly starts tonight" — invited readers to take a quiz on who is most likely to be left behind. (By an overwhelming majority, politicians will feel the fiery furnace; journalists, surprisingly, are more likely to be spared, at least ahead of bloggers and those who talk on their cell phones.)

Do the end-timers seem ignorant? Yes. Are they insane? Possibly. But should our reaction to them be chuckling glee or something more like sadness? Pay attention to their individual stories — their willingness to sacrifice everything in anticipation that their earthly lives are over — and I dare you not to feel the latter. Ashley Parker of The New York Times writes about a mom who stopped working, and stopped saving for college for her three teenaged children. One of the kids admitted, "I don't really have motivation to try to figure out what I want to do anymore because my main support line, my parents, don't care." At NPR, Barbara Brown Haggerty reports on a young couple, with a toddler and a baby on the way, who are spending the last of the savings. The wife says, "We budgeted everything so that, on May 21, we won't have anything left."

Laughing at religious fanatics is nothing new. And, at some level, there's nothing wrong with it. But this story didn't just take off in popularity because people wanted a quick laugh or some insight into a quirky subset of our country. There's a cruelty underlying our desire to laugh at this story — a desire to see people humiliated and to revel in our own superiority and rationality — even though the people in question are pretty tragic characters, who either have serious problems themselves or perhaps are being taken advantage of, or both.

Sure, it's an interesting story when a fringe group decides the world is ending tomorrow. But it's also a small story. Come Sunday morning, as news articles flood in about the disillusioned end-timers, and those articles instantly become some of the most popular on the web — as they surely will — we might want to ask ourselves not what is wrong with this sad group of apocalyptic believers, but rather what is wrong with a society that takes such pleasure in their dysfunction.