Accessibility links
The Root: The Sad History Of Cemented Cemeteries This month, after much ado, a Virginia African-American cemetery — now a parking lot — will be given to the Slave Trail Commission. However, Jonathan Pourzal of The Root warns that there are many more burial grounds, some unknown, that deserve to be returned to descendants.

The Root: The Sad History Of Cemented Cemeteries

The Root: The Sad History Of Cemented Cemeteries 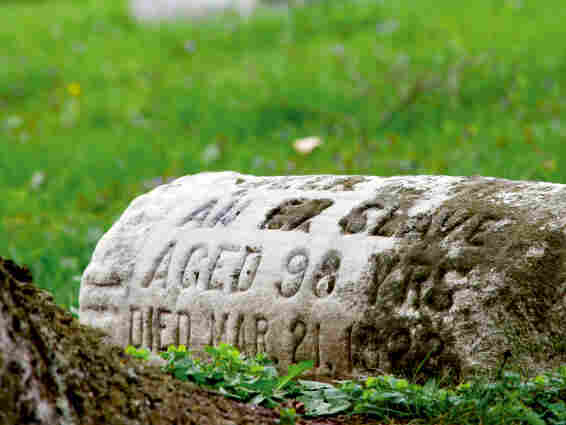 This 1800s tombstone of an ex-slave shows wear. Several organizations are fighting to reclaim African-American burial grounds that has been exhumed or turned into parking lots. Jim Jurca/iStock hide caption 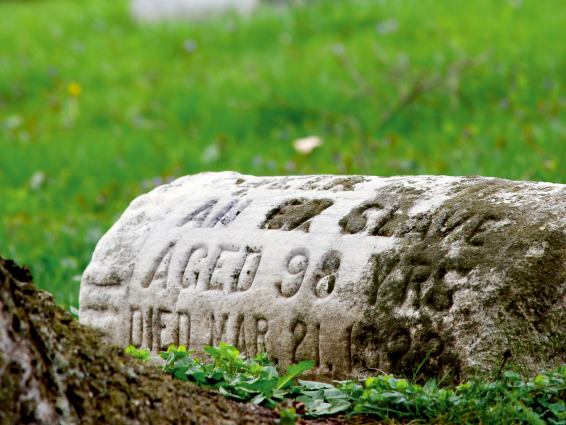 This 1800s tombstone of an ex-slave shows wear. Several organizations are fighting to reclaim African-American burial grounds that has been exhumed or turned into parking lots.

Jonathan Pourzal conducts study tours that illuminate the ancient Egyptian influence on America's founding fathers. He has also written about his travels to Egypt to help excavate 25th Dynasty tombs.

For more than 10 years, Richmond, Va.'s oldest municipal burial ground for people of African descent has been covered over by an active parking lot owned by Virginia Commonwealth University. The dead cannot speak, so Richmond's African-American community has been fighting to remove the parking lot and protect its ancestral legacy.

Richmond, former capital of the Confederacy, was one of the largest slave trading centers in the U.S. and a place to which many African Americans can trace their roots. Dead Africans — free and enslaved — were buried at Richmond's African Burial Ground between about 1750 and 1814; it was known then as the "Burial Ground for Negroes." This was also the site of the execution of the famous slave rebellion leader Gabriel Prosser.

The Virginia State Legislature recently passed a bill that transfers the property from VCU to the Richmond City Council's Slave Trail Commission. It becomes law on July 1, 2011, and the university's Board of Visitors is expected to surrender the property on May 23. The university's president and the mayor of Richmond are expected to attend the turnover. Several private contractors have offered to remove the lot's asphalt, free of charge.

However, this transfer has only happened because of constant pressure on VCU and state and local legislators by Richmond's black community. The university had resisted the African-American community's appeals to shut down the parking lot since purchasing it several years ago. The school even ignored its own students' protests.

A local Richmond organization, the Defenders for Freedom, Justice & Equality, has worked for a decade to reclaim the burial ground on behalf of the African-American community. Members led an act of civil disobedience on April 12, 2011 (the 150th anniversary of the start of the Civil War), by blocking the parking lot's entrance for an hour and a half; four were arrested, charged with trespassing, and given a court date of May 25. "This was important to demonstrate that even though progress has been made, VCU still refuses to close the lot," said DFJE organizer Ana Edwards. "It demonstrates that people were able to park somewhere else."

Dr. Shawn Utsey, chair of the African-American studies department at VCU, says, "The struggle of the community was instrumental ... the African Burial Ground [ABG] represents the humanity of African people, so this is an effort to reclaim their humanity ... it is long from over." Utsey directed the 2009 award-winning documentary, Meet Me in the Bottom: The Struggle to Reclaim Richmond's African Burial Ground.

During slavery, cemeteries for African Americans were located in undesirable areas. Many African cultures share the belief that a person's soul lives on after death. Therefore, a burial ground is more than a final resting place; it is a sacred space to be preserved for the use of transitioned souls.

It makes you wonder: Nationwide, how many ABGs are covered and waiting to be found, and where are they? "Every port town or city in the Americas that heavily relied on enslaved labor is likely to have had a municipal cemetery for enslaved Africans," says Michael Blakey, director of the Institute for Historical Biology at William & Mary College, " ... But these cemeteries ... are in unknown locations and there are no community efforts around them ... " Common factors include a forgotten legacy rediscovered because of construction and a lack of institutional respect for descendents' rights to decide the fate of their ancestors' place of rest.

In recent years, several other ABGs have been discovered, and the ensuing struggles to preserve them have often pitted powerful real estate or political interests against African-American desires to honor the dead.

One example was the African Burial Ground in lower Manhattan. During the preliminary phases of putting up a new federal building in the early 1990s, excavators discovered evidence of an 18th-century burial ground. Initially, the GSA, a federal agency, did not inform New York's African-American community of its finding, but news got out and triggered outrage at the casual exhumation of ancestors.

Chris Moore, a historian and curator at New York's Schomburg Center for Research in Black Culture, was one of the first to inform the public about the African Burial Ground. According to Moore, the GSA tried to keep the excavation quiet. He said that federal officials and archaeologists initially claimed ignorance, but workmen at the site informed him they were " ... taking truckloads of bones out of here."

The GSA initially announced that no more than a few hundred people were buried at the site; it is now estimated that there are 15,000-20,000 remains under a five-block area.

A long battle ensued, involving community protests, court hearings and support from city and state officials that finally garnered national attention. As a result, the excavation was halted for some time, and the disinterred remains of 419 people were sent to Howard University for research (and later re-interred at the African Burial Ground). A memorial was built next to the new building and an interpretive center added inside the lobby, explaining the site, now a national monument.

Other burial grounds have been rediscovered in places as varied as Portsmouth, N.H.; Rio de Janeiro, Brazil; and Dallas — and they often trigger similar community struggles to reclaim those sites. For several years, Harlem's African-American community has been fighting to reclaim and memorialize a burial ground covered by a bus depot.

As the 150th anniversary of the Emancipation Proclamation approaches (Jan. 1, 2013), efforts to recover Richmond's African Burial Ground — and all other sites that contain black ancestral remains — gain special significance for all Americans.