Accessibility links
Georgia Farmers Brace For New Immigration Law A new Georgia law aimed at cracking down on illegal immigrants takes effect July 1 and will require most businesses to verify worker eligibility. For farmers and their workers, the likely consequences will be hefty: The law could lead to understaffed farms, and to cutbacks in two lucrative state crops — peaches and Vidalia onions. 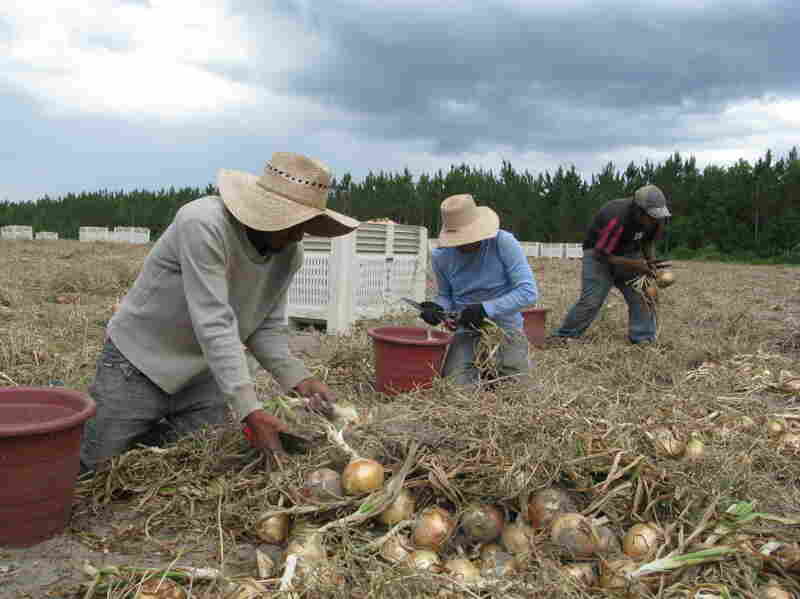 Migrant workers hand pick Vidalia onions in Georgia. The vegetable is too delicate to be harvested with machines. Kathy Lohr/NPR hide caption 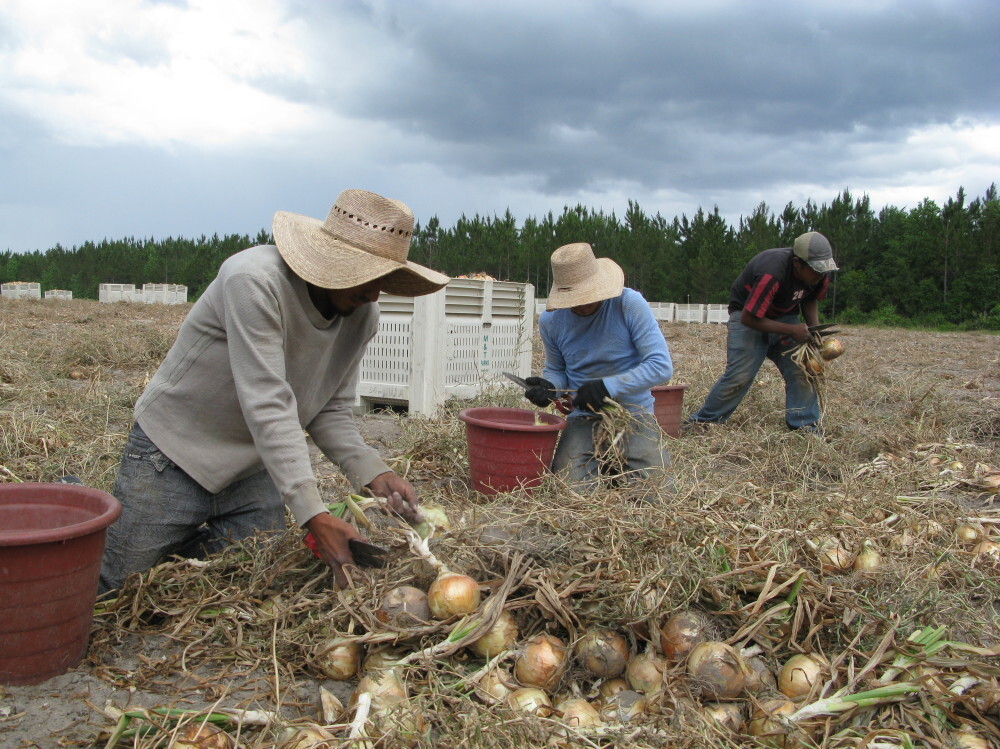 Migrant workers hand pick Vidalia onions in Georgia. The vegetable is too delicate to be harvested with machines.

Georgia is putting in place a new law aimed at cracking down on illegal immigrants, and many across the state are nervous. Businesses fear an economic boycott, the Latino community fears police officers will abuse their new powers, and farmers in South Georgia fear the law will hurt them dramatically.

Georgia is known for its peaches and Vidalia onions, the state vegetable. The specialty crop is produced in just a few counties in the rural southeast part of the state, where the soil is just right.

Aries Haygood with M&T Farms watches a crew of about 50 migrant workers as they hand pick the golden onions in groups of three or four.

"Right now they're just coming in through the field," he says. "They're grabbing the onions out and just clipping the tops and roots getting them prepared to bring to the packing house."

It's a labor-intensive process that machines just can't do because they'd bruise the delicate crop — a $140 million-a-year industry.

This farm has 500 acres of onions with some 80,000 plants per acre, so Haygood relies heavily on migrant workers for help.

"Our biggest fear is that because of the way the bill could be structured we won't be able to find enough workers to do the work that we need done in a short amount of time," he says.

'Livelihood On The Line'

Just a few miles east, R.T. Stanley Jr. has been growing Vidalia onions since the 1970s. He's also troubled by the immigration law, which he says is already affecting his workers.

"If they're scared they'll go to other states instead of Georgia because we have this new law," he says. "And I'm worried about that."

Stanley says experienced workers can earn as much as $200 a day. He says he's tried to hire locals to do the job — working in the fields eight hours or more clipping, bending and lifting in the oppressive Georgia heat.

"They just don't want to do this hard work. And they'll tell you right quick," he says. "I have 'em to come out and work for two hours and they said, 'I'm not doing this. It's too hard.' "

For Stanley, finding workers is already tough enough and he says the new restrictions are likely to make it worse.

"I got my livelihood on the line," he says. "If I don't harvest these onions, I'll lose my farm."

Some farmers do use the federal government's temporary worker program known as H-2A, but they say the system has problems — including red tape and processing delays.

The new Georgia law, patterned after the Arizona law currently being challenged in court, requires that all businesses with more than 10 employees use the federal E-Verify system to confirm workers' eligibility.

Onion growers say they know there's pressure on politicians to do something about illegal immigration, but they're not sure this is the answer.

Joel Salgado, a crew foreman from Mexico, is here legally and has been harvesting onions for about 15 years. "The people have to go back to Mexico, you know. They don't want to risk any more over here," he says. "They no gonna find work. ... I know a lot of families that went back already."

Georgia Gov. Nathan Deal knows there's opposition to the new law, including legal challenges and the threat of an economic boycott. But he says the new law is the right thing to do. 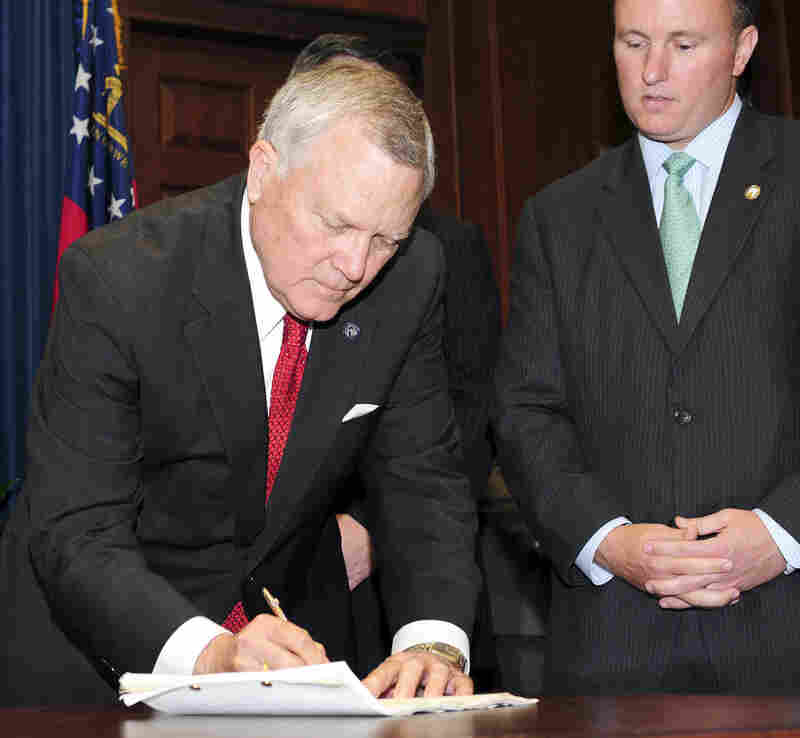 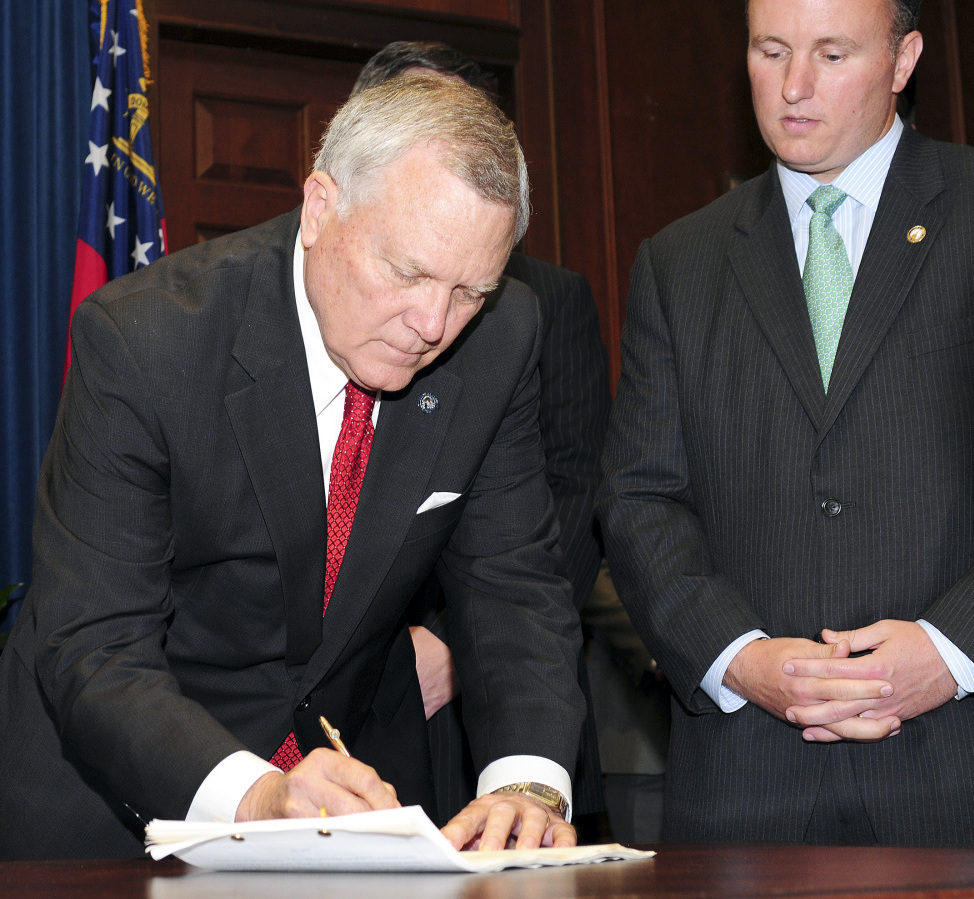 "Let me reiterate something important that sometimes gets lost," he said, as he signed the bill May 13. "Illegal immigration is already illegal in the state of Georgia."

Deal says nearly half a million illegal immigrants are estimated to live in Georgia — and they cost taxpayers billions of dollars each year. State Rep. Matt Ramsey is the bill's sponsor.

As the law is phased in over the next couple of years, farmers in South Georgia suggest agriculture workers could be treated differently from others — but Ramsey says that won't work.

"I don't think we need to start picking winners and losers in the statute and treating industries different," he says. "Particularly in this time of 10 percent unemployment."

But back in Vidalia, Haygood says if farmers can't get enough workers, they may have to stop producing crops like onions and peaches.

"We've invested our time and our effort into growing our companies and then all of a sudden something like this could put this industry out of business, overnight."

It's unclear exactly what will happen as Georgia begins implementing its new law. Farmers will have to comply — and higher labor and processing costs could mean higher prices for consumers.