Accessibility links
Supreme Court Rules California Must Cut Prison Population By a 5-to-4 vote, the high court ruled that severe overcrowding in state prisons has resulted in extreme suffering and even death, a deprivation of the inmates' rights that violates the Constitution and the 1995 federal Prison Litigation Reform Act, as well. 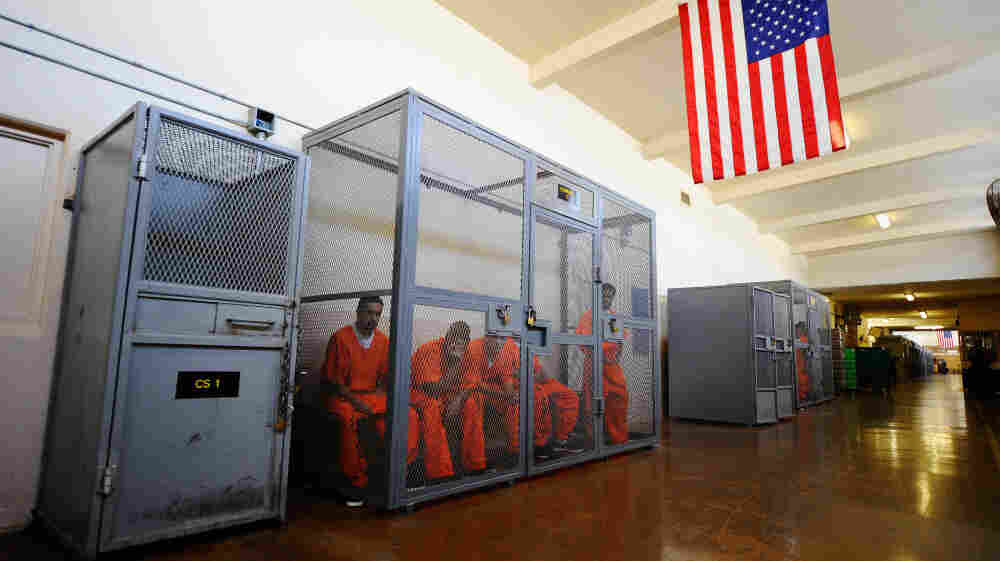 Inmates at California's Chino State Prison sit inside a metal cage in the hallway as they wait to be assigned permanent housing or for medical, mental health, counselor or other appointments. Kevork Djansezian/Getty Images hide caption 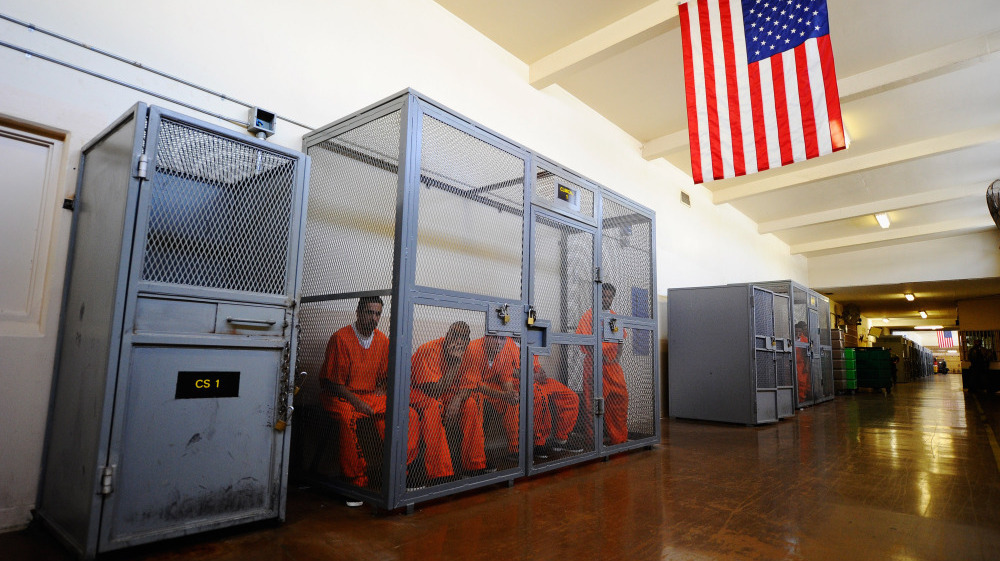 Inmates at California's Chino State Prison sit inside a metal cage in the hallway as they wait to be assigned permanent housing or for medical, mental health, counselor or other appointments.

A bitterly divided U.S. Supreme Court ordered California on Monday to reduce its prison population by some 33,000 prisoners within the next two years.

By a 5-to-4 vote, the high court ruled that severe overcrowding in state prisons has resulted in extreme suffering and even death, a deprivation of the inmates' rights that violates the Constitution and the 1995 federal Prison Litigation Reform Act, as well.

California's 33 prisons, designed to house 80,000 inmates, housed twice that many prisoners by 2009.

"The California state prison system is the worst overcrowded system I have seen in my experience," says Wayne Scott, who headed the Texas prison system under then-Gov. George W. Bush.

Scott was one of many expert witnesses called in to look at the California system after 20 years of litigation and failure by the state to achieve reforms that it had agreed upon. Scott and other prison experts told a special three-judge court that overcrowding was the primary cause of the state prison's problems. The court then ordered the state to reduce the prison population to 137 percent of capacity, more than the 130 percent recommended by the Federal Bureau of Prisons.

The state appealed to the U.S. Supreme Court, and it lost on Monday. Writing for the five-member court majority, Justice Anthony Kennedy noted that the court has long held that prisoners are, in essence, wards of the state since they cannot provide for themselves. "Just as a prisoner may starve if not fed, he or she may suffer or die if not provided adequate medical care." Moreover, said Kennedy, a prison system that fails to provide basic medical care is "incompatible with the concept of human dignity and has no place in a civilized society." California, he said, by virtue of its overcrowding, violates the Constitution's ban on cruel and unusual punishment, and the courts "must not shrink from their constitutional obligation to 'enforce the rights of all persons, including prisoners.' "

In a 48-page opinion, Kennedy laid out some of the facts of the case. Prisoners are not only doubled and tripled up in 6-by-9 cells but are stacked in bunks in areas meant to be gymnasiums, classrooms and even clinics. As many as 54 prisoners use one toilet, breeding disease, and medical care is so deficient that one prisoner dies needlessly every six to seven days. On the mental health side, prisoners awaiting care are often housed in "tiny, phone-booth sized cages," with some inmates falling into hallucinations and catatonic states, and suicides well above national norms.

Justice Kennedy pointed out that the state had repeatedly agreed to fix these conditions by building more prisons, but the Legislature didn't provide the money, and the overcrowding just grew worse. Given California's ongoing budgetary crisis, Kennedy observed, there is no possibility the state can "build itself out of" its overcrowding problem, so the state will have to choose a combination of other methods, even perhaps release of nonviolent prisoners to reduce the state prison population. Joining Kennedy in the majority were Justices Ruth Bader Ginsburg, Stephen Breyer, Sonia Sotomayor and Elena Kagan. Dissenters were Justices Antonin Scalia, joined by Justice Clarence Thomas in one dissenting opinion, and Justice Samuel Alito, joined by Chief Justice John Roberts in another.

In an angry oral dissent from the bench, a fired-up Scalia called the court's decision "radical," "outrageous" and "wildly beyond ... [the] institutional capacity" of courts. The result, he said, would be the release of tens of thousands of "happy-go-lucky felons." In his dissent, Alito accused the majority of "gambling with the safety of the people of California."

But California officials said they believe a recently enacted prison "realignment" program would prevent any early prisoner releases. "Our goal," said Matthew Cate, secretary of the California Department of Correction and Rehabilitation, "is not to release inmates at all. Through realignment, ideally, we would see that lower-level offenders ... would attrit out, having served their normal sentences, and they would not be replaced because the new offenders would be housed in county jail."

Jeanne Woodford, former warden of San Quentin Prison and former head of the California Department of Corrections, echoed that, saying, "I don't think the state of California has to release anyone, really." Woodford and other experts point to a variety of ways that California can reduce overcrowding, short of releasing prisoners. "This is really about making our minds up that prisons are for violent offenders" and less serious offenders "should be kept at the local level," said Woodford. She noted that it costs $50,000 per year to keep someone in state prison, compared with local jails, which can and do hold people more cheaply.

Indeed, California has recently enacted a prison realignment law to do just that, but the money has yet to be appropriated for the local transfers. The law also provides for more "good time" to reduce prison sentences, and other measures, including a provision to send parole violators to local jails instead of sending them for just a few months to the state prison system.

Donald Specter, whose litigation led to Monday's ruling, suggests there may have to be changes to California's three-strikes law, which imposes mandatory 25-year minimums on three-time offenders, even if their crimes are nonviolent. "There are a lot of second-strikers who get their sentence doubled just because they've had another strike. So, instead of a burglary being five years, automatically it's 10," Specter said.

California has two years to make all these changes, unless it can get the lower courts to give it an extension, something the Supreme Court suggested on Monday is an option the lower courts may consider.