Accessibility links
New York Public Library: 100 Years Of Open Doors The library's main building in Manhattan opened to the public 100 years ago Monday. Ever since, the iconic neoclassic building housing some 50 million items has welcomed readers from all over the world. The entrance is guarded by a stately pair of lion statues named Patience and Fortune. 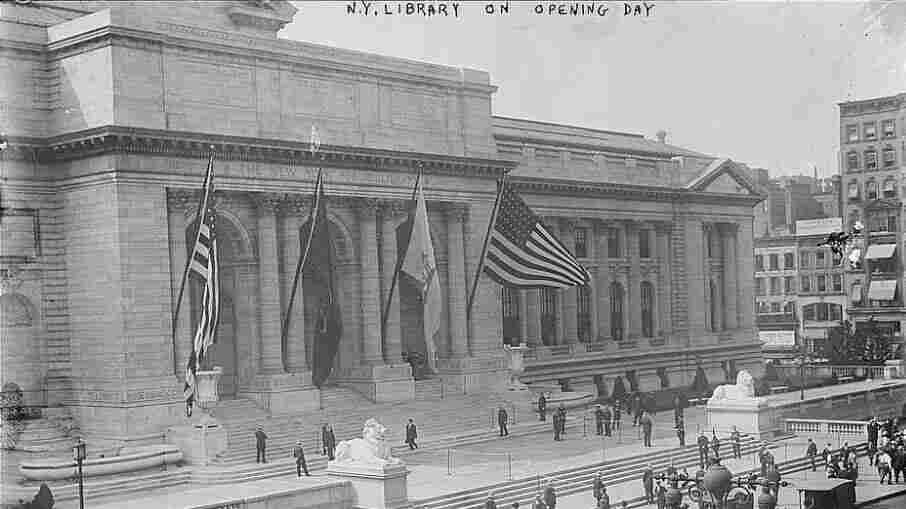 The staff at the New York Public Library made some noise Monday while celebrating a major birthday. The library's main building in Manhattan opened to the public exactly 100 years ago.

Ever since, the iconic neoclassic building has welcomed readers from all over the world.

It's also 100 years of Patience and Fortitude: the names of the lion statues that stand guard on the steps of the building on Fifth Avenue in Manhattan. 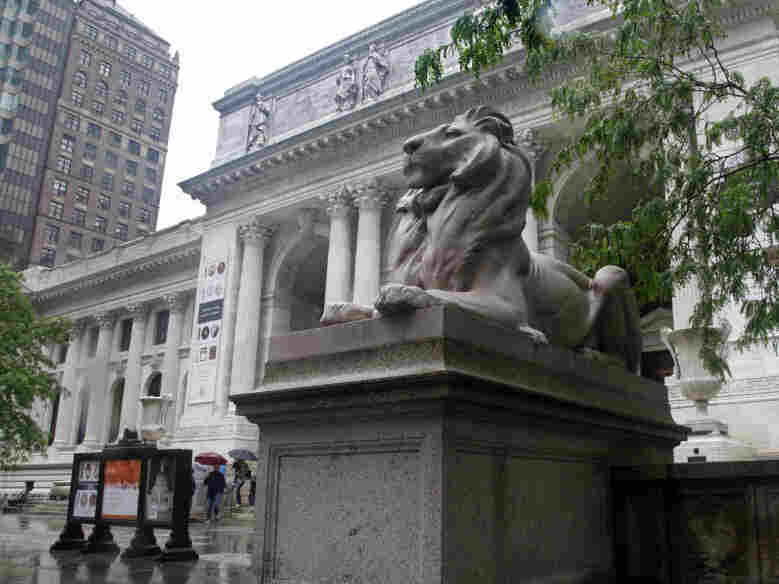 The marble lion "Fortitude," one of a pair created by Edward Clark Potter in 1911, is seen at the main entrance to the New York Public Library on May 20. Bebeto Matthews/AP hide caption 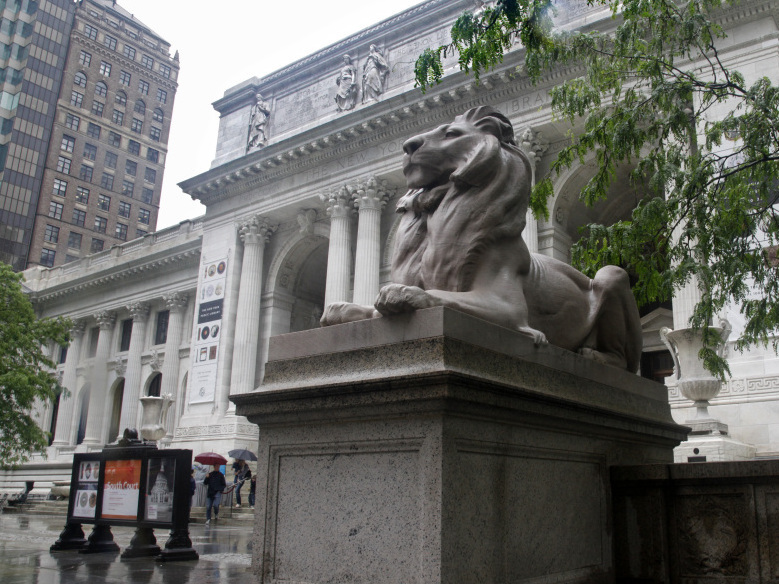 The marble lion "Fortitude," one of a pair created by Edward Clark Potter in 1911, is seen at the main entrance to the New York Public Library on May 20.

The marble lions — and the library they represent — have been photographed millions of times by an adoring public, and they've appeared in dozens of films and TV shows, including Breakfast at Tiffany's, Ghostbusters and The Day After Tomorrow.

The New York Public Library is not a modest building. The steps on Fifth Avenue lead up to a waiting room with grand marble columns — and zero books.

Library President Paul LeClerc explains that the founders of the library were trying to send a message.

"New York has always been a ferociously ambitious city, even when there wasn't very much to show off," he says. "Those involved in creating this library wanted to create something that was on a par with the great libraries of the European capitals, especially London, Paris and Berlin."

Plus they needed to build something bigger and flashier than Boston's library. Hence the majestic main reading room at the New York Public Library, which stretches for two city blocks. Beneath it lie the stacks, where the library keeps many of its 50 million items.

The library is open to anyone, and you can ask to read virtually anything you want, no questions asked.

"I was stunned the first day I ever walked in here, because you just walk in here," says Adam Gopnik, a staff writer for The New Yorker magazine and a regular visitor to the library for 25 years. He says that's a stark contrast to the great European libraries like the National Library of France, where you need credentials and recommendations just to get in the door. 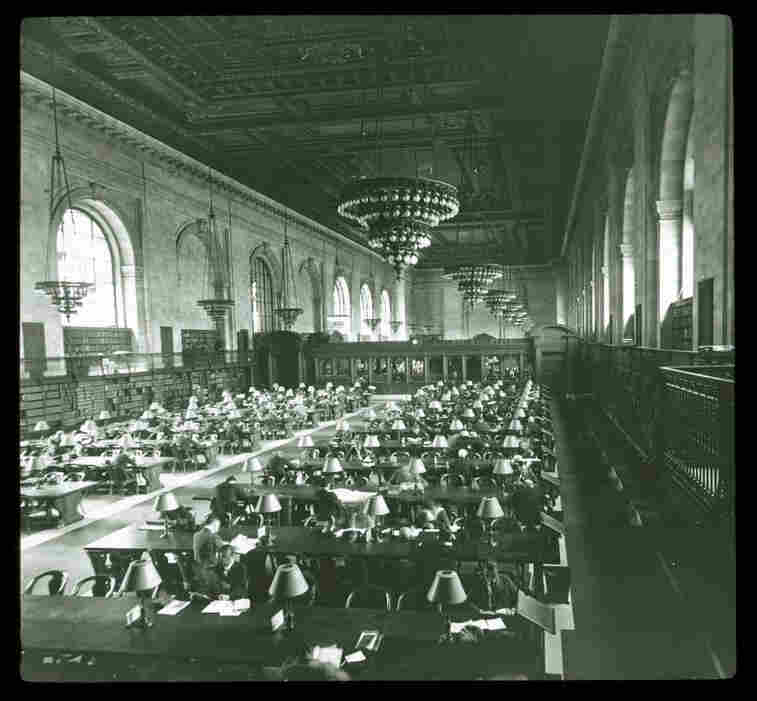 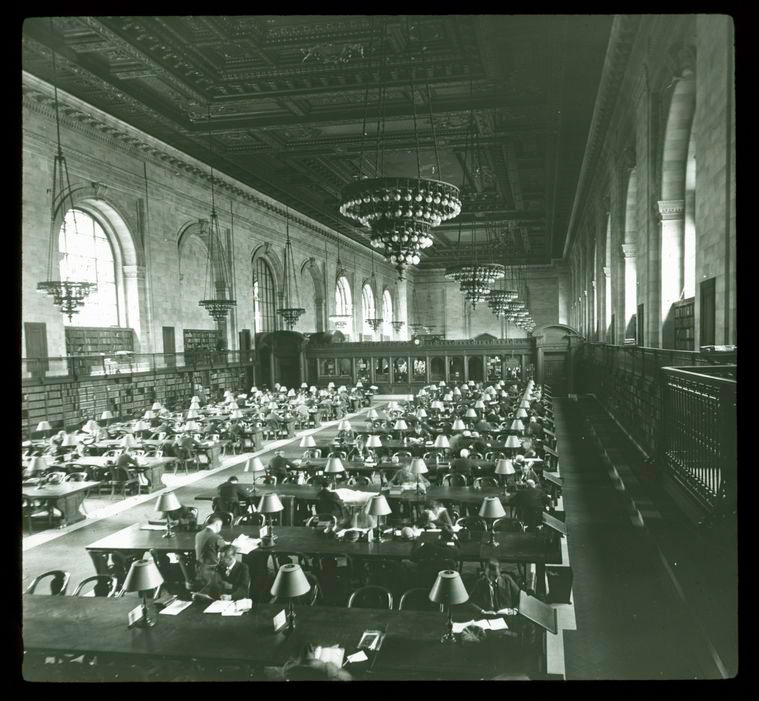 "I don't think we brood sufficiently on what a miraculous institution this is," he says. "It's not democratic in spirit: It's democratic. The credential you present is your existence. And the resume you show is your curiosity."

The library itself may be facing an existential threat, as more and more information is stored digitally. But even if the New York Public Library diminishes in importance as a repository of books, Gopnik thinks it will still be an important center for learning.

And of course, there's only one place to get your picture taken with Patience and Fortitude.