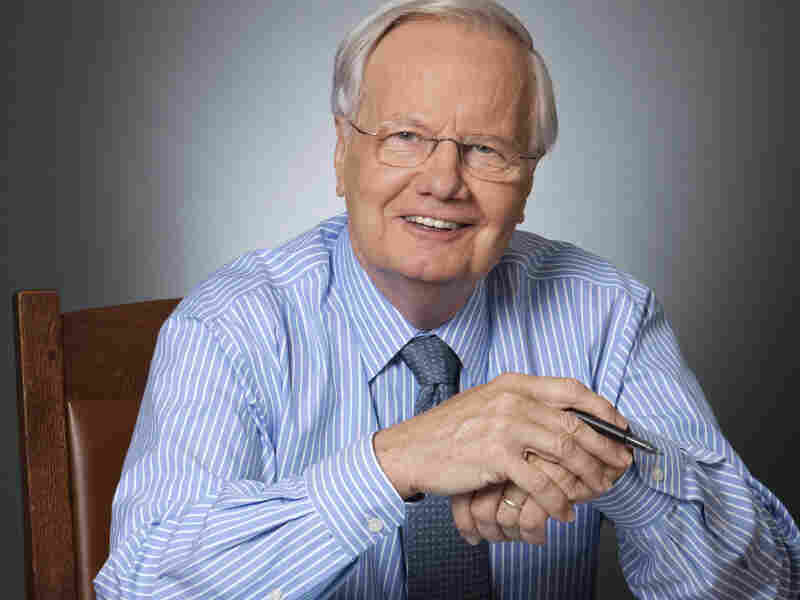 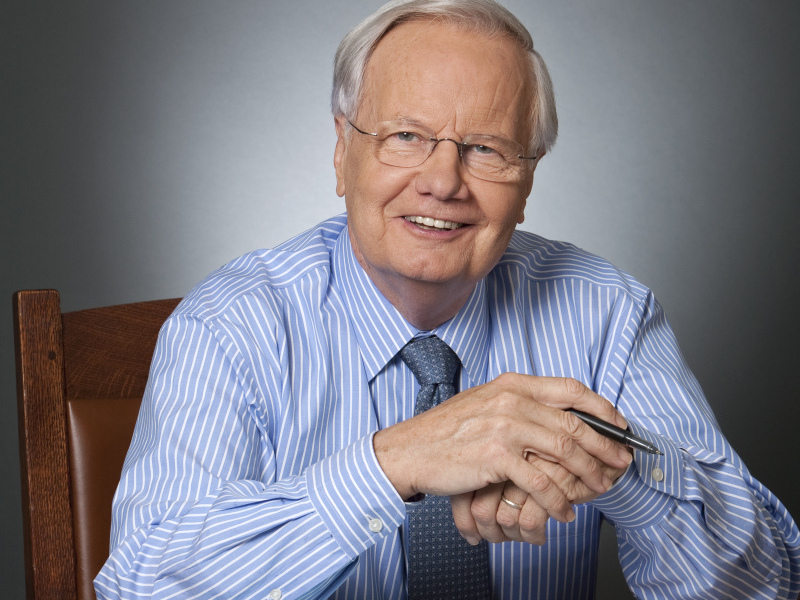 In 2007, Bill Moyers returned to PBS to revive his long-running public affairs program, Bill Moyers Journal, which first aired on PBS in the '70s. Moyers' show drew a loyal audience to its coverage of politics, public controversy and the arts before his retirement in 2010.

In a new book, the longtime PBS host and former aide to President Lyndon B. Johnson recaptures the show's memorable interviews, from The Wire's David Simon to conservationist Jane Goodall to Chicago minister Jeremiah Wright.

Moyers launched his program's revival with an interview with Jon Stewart, the Comedy Central host who satirizes the news business to which Moyers is so devoted. It wasn't the most obvious choice, but Moyers tells NPR's Neal Conan that Stewart was his second choice after Mark Twain — and he wasn't available.

"I think Stewart is the closest we've come in a long time to Mark Twain," Moyers says. "Both of them understood a very important point about American politics, which is that the truth goes down easier if it's marinated in humor."

Moyers describes Stewart's interview as an enjoyable mental exercise, but they weren't all that way.

"The worst interview I ever did in my career ... was with Henry Kissinger," Moyers says. "I could not get him to say one thing that was close to candid."

For seven years, Moyers worked under Presidents Kennedy's and Johnson's Democratic administrations. He says some believe his time in government must have led to an inherent bias; but over the course of his 40-year public television career, he says, he realized that what matters is "not how close a journalist gets to power, but how close a journalist gets to the truth."

Despite his early start in politics, Moyers says he wasn't tempted to run for office.

"I was too embedded in journalism," he says.

"I was only by accident — by coincidence — in the White House," says Moyers, who spent two years as Johnson's press secretary, where, he says, "our credibility was so bad we couldn't believe our own leaks."

And after fielding a particularly tough question from a reporter, he says he remembers thinking, "I don't belong on this side of this briefing. I belong on the other side, asking questions."

Then and there, he decided to leave government, a decision that led to a long and distinguished career in journalism. 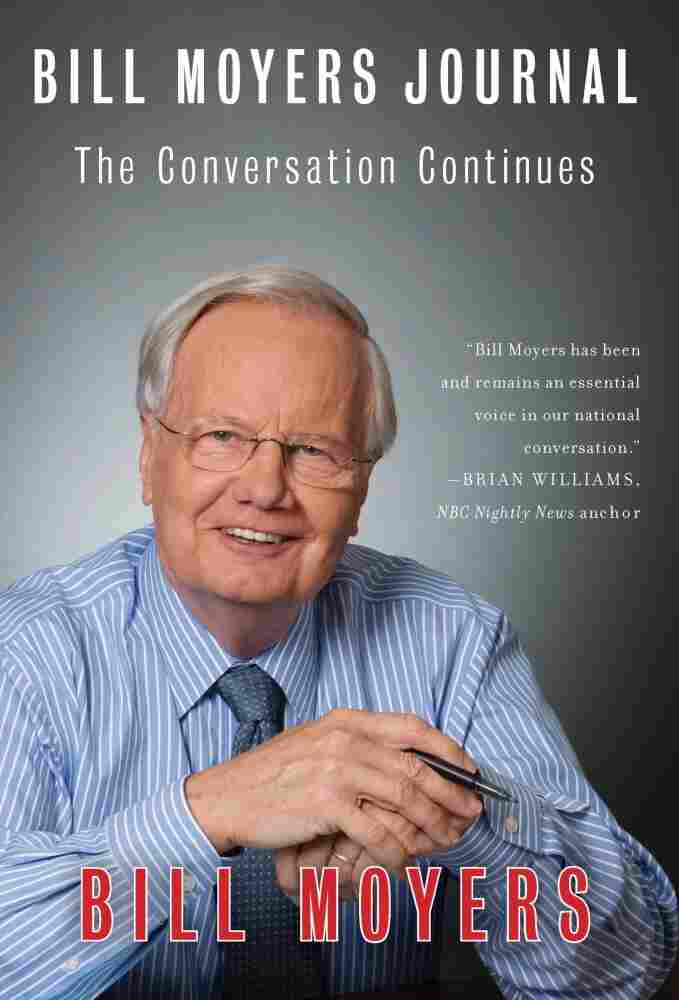 This had to be one of the most unusual and intriguing legal teams in American judicial history. Two courtroom titans who had battled each other all the way to the Supreme Court in Bush v. Gore were back, this time on the same side, defending same-sex marriage.

David Boies was no surprise. Long a champion of progressive causes, he had been the Justice Department's special counsel in its successful antitrust suit against Microsoft. But Ted Olson? An icon of the right, an influential legal advisor in the Reagan administration, he had triumphed in 2000 when the conservative majority on the Supreme Court decided the contested election for George W. Bush, who later asked Olson to be his solicitor general. Now he was breaking with his own crowd to champion a cause they abhorred.

On Election Day in 2008, as Barack Obama was collecting California's fifty-five electoral votes on his way to the White House, voters in that state, by a margin of 52 to 48 percent, approved Proposition 8, which ordered the state constitution to define marriage as the union between one man and one woman, effectively prohibiting gay and lesbian marriage. A year later the California Supreme Court upheld the amendment's constitutionality. Olson and Boies then filed a legal challenge on behalf of two same-sex couples — two men, two women — who had been denied the right to marry.

Thanks to activists who reenacted the hearings online, I could follow the arguments as if they were a courtroom drama on TV, and I found them so fascinating I asked Olson and Boies to join me on the Journal even before the federal judge had handed down a ruling. That ruling came down on August 4, 2010, when U.S. District Judge Vaughn Walker agreed with Boies and Olson and overturned Proposition 8. Pending appeal, his decision remains on hold, and it seems clear that Boies and Olson will eventually be back before the Supreme Court of the United States — an ideological odd couple, allies instead of foes.

Many people in this partisan and polarized country have been hoping to see conservatives and liberals unite on at least one principle that they could agree upon. But just about everyone I have talked to was surprised to see the two of you show up in the same court arguing for gay marriage. What do you have in common on this?

Boies: I think one of the things we have in common on this issue is respect for the rule of law, respect for civil rights, respect for the Constitution. This is not a liberal or conservative issue. It's not a Republican or Democratic issue. Conservatives and liberals alike need the Constitution. Conservatives and liberals alike want to keep the government out of regulating our personal conduct, want to keep the government out of the bedroom.

But everyone knows conservatives in this country have been clear that they are opposed to gay marriage. And the strong base of the Republican Party, the religious right, is adamant about this. Your own friend, your good friend, former judge Robert Bork, has called same-sex marriage a judicial sin. He said he can't even bear to talk to you about this case. Now, if he should say, "Come over and let's have a drink and talk about it," what would you do to justify the position you have taken?

Oson: I think the more people hear what David and I have to say, the more people will understand. That's one of the wonderful things about the fact that we have come together, because people will ask the question that you've just asked: "Why are you doing this? What is your explanation?" It gives us a chance to explain the damage that's being done by discrimination, and the great burden that would be lifted if we finally stop.

But might not Judge Bork counter that you've joined with this liberal elitist here to find in the Constitution another "new" right that really isn't there?

Oson: We're not advocating any recognition of a new right. The constitutional right to marry has been recognized by the Supreme Court over and over again. We're talking about whether two individuals should be treated equally, under the equal protection clause of the Constitution, the same thing that the Supreme Court did in 1967, when it recognized the constitutional rights of people of different races to marry.

In 1967, seventeen states prohibited persons of a different race from marrying one another. The Supreme Court didn't create a new right — the right was the right to marry. The Supreme Court unanimously said discrimination on the basis of race in that instance was unconstitutional.

The voters in California spoke very clearly, 52 to 48 percent. The referendum said, "Only marriage between a man and a woman is valid or recognized in California." And you're telling the majority of those voters they're wrong?

There are certain rights that are so fundamental that the Constitution guarantees them to every citizen regardless of what a temporary majority may or may not vote for. What Ted said is very important. Nobody's asking to create a new constitutional right here. This is a constitutional right that has already been well recognized by the Supreme Court. 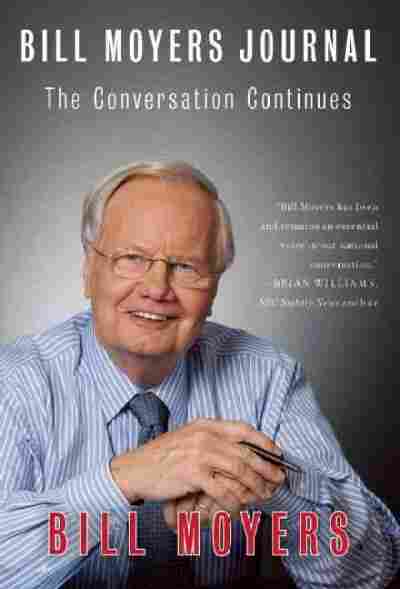