Accessibility links
Arab World Offers Obama Rhetorical Tightrope President Obama is expected to address changes in the Middle East and North Africa on Thursday. Although democracy movements there and the death of Osama bin Laden will allow Obama to strike an optimistic tone, there will still be limits on how much policy change he can promise. 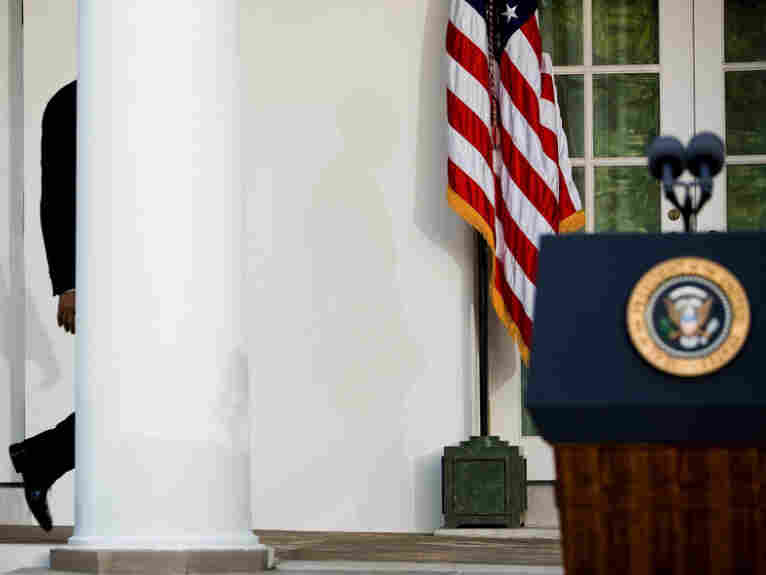 In his speech addressing the Muslim world on Thursday, President Obama will attempt partially to close the gap between U.S. ideals about democracy and its strategic interests in the Middle East and North Africa. It won't be easy.

Obama is using the occasion of the death of al-Qaida leader Osama bin Laden to recalibrate the United States' relationship with the Muslim world. It's a hopeful moment, both because of that triumph against terrorism and because of the push for democracy seen throughout the region this year.

In a conference call with reporters Wednesday, senior administration officials outlined a package of economic aid that Obama will announce officially. The package, primarily geared to help Egypt and Tunisia, will include approximately $1 billion in debt relief; an additional $1 billion in loan guarantees; and additional funds available through multilateral institutions such as the World Bank and the International Monetary Fund.

NPR.org will stream President Obama's speech live Thursday morning and will have reaction from the U.S. and abroad to the address. You also can submit questions to a Twitter follow-up interview with Deputy National Security Adviser Ben Rhodes.

Despite the relatively modest sums, the officials said they hoped that such support would wed economic reforms to democratization, pointing to earlier efforts at economic modernization programs in the former communist bloc countries as a model.

"It's important to note that the political movements we've seen are rooted in part in a lack of opportunity in the region," one senior administration official said. "We see this as a critical window of time to take some concrete actions."

But Obama will remain constrained in terms of how much political and diplomatic support he can promise to democracy movements. The U.S. maintains relations with numerous autocratic leaders across the region. And it is not going to intervene militarily to protect citizens, as it did in Libya, in places such as Syria, observers suggest.

"Nothing should be said or promised in the speech that won't be delivered on," says Micah Zenko, a fellow with the Council on Foreign Relations.

- May 15: Palestinians protest throughout Israel and on its borders

- April 23: Yemeni President Ali Abdullah Saleh agrees to a deal to step down but hadn't done so as of May 18

- March 15: Protests in Syria begin to escalate in several cities

- Dec. 17: Mohamed Bouazizi, a Tunisian street vendor, sets himself on fire, setting off wave of protests

So, while Obama is likely to express support for democracy and reiterate that the U.S. is not at war with Islam, it's unlikely that he will unveil a grand new strategy toward the region. Instead, the U.S. will continue to weigh its responses to calls for change on a "country by country" basis, says Marina Ottaway, director of the Middle East program at the Carnegie Endowment for International Peace.

Issues That Could Be Addressed

Obama will have to address the latest tensions between Israel and the Palestinian leadership, Zenko says. Palestinians attempted to cross into Israel en masse from bordering nations Sunday, triggering a sometimes violent response from Israel.

Fatah, which governs the West Bank, recently reached an accord with Hamas, the party that controls Gaza. Even after the deal, Hamas leaders said they will continue to refuse to recognize Israel.

That puts Obama in a tough spot. Recognizing any government that Hamas would take part in would be unacceptable to Israel, while refusing to do so "is going to enrage the Arab world," says Ottaway. "It's going to be a very difficult balancing act for Obama."

In addition to the perennial difficulties of the Israeli-Palestinian peace process, Obama is expected to address the shifting political realities around the Arab world, which present their own challenges.

The U.S. has long maintained relations with "friendly tyrants" in the region, says Noureddine Jebnoun, a professor at the Center for Contemporary Arab Studies at Georgetown University. Such relationships have gotten closer since the Sept. 11, 2001, attacks, Jebnoun says, creating what he calls a "vicious circle" of autocrats suppressing their populations in the name of security.

Bin Laden's death creates the opportunity to rethink such relationships, Jebnoun says, particularly in nascent democracies such as Tunisia.

"What people fail to realize is that all of these revolutions for freedom and human dignity completely take the wind out of the sails of extremists like al-Qaida," says Ibrahim Hooper, national communications director for the Council on American-Islamic Relations (CAIR). "The only reason a tiny minority of the population supported them is that when there was no political outlet, it drove people to extremism."

For all the talk about the U.S. being a spent power and not being relevant, people are concerned about what this particular president says.

Brian Katulis, senior fellow at the Center for American Progress

Support for democratic aspirations is what Middle Eastern and North African citizens want to hear in the wake of the so-called Arab Spring, says Adeed Dawisha, a political scientist at Miami University of Ohio.

"We should as a nation keep barking at that and keep showing the Arabs and Muslims how excited we are by this," Dawisha says, "rather than continue to be somewhat torn between supporting the movements and being somewhat diplomatic to our friends who are autocrats."

But the U.S. is likely to remain torn in just that way. Supporting democracy and nonviolent change will continue to be the default stance of the Obama administration. At the same time, the U.S. will measure its response to protest movements in individual countries based on its own strategic interests, experts say, which may include maintaining good relations with leaders who are the protesters' targets.

While agreeing that democracy promotion should be the foundation of U.S. strategy in the region, Jebnoun says that "the United States cannot indiscriminately promote democracy to supplant its strategic allies."

The fact that the U.S. has offered varying degrees of practical and even rhetorical support to the protest movements in various Middle Eastern and North African countries has left the Obama administration open to charges of inconsistency, says Ottaway, of the Carnegie Endowment.

"I don't think that will change, in practice," she says. "The question is, at the rhetorical level, is [Obama] going to offer a broader endorsement of the Arab Spring, even if that leaves him open to criticism later?"

Obama has the opportunity to reshape the American image in the Muslim world, not just because of bin Laden's death and the Arab Spring, but also because of the chance that the U.S. will wind down its presence in Afghanistan and Iraq. But Muslims will be looking to see progress not just in those wars but in the Israeli-Palestinian conflict as well, says Hooper, the spokesman for CAIR.

"We welcome any time any politician speaks out positively in favor of better relations with the Muslim world and repeats the fact that we're not at war with Islam," Hooper says. "Having said that, it's important he tie any outreach to actual policies on the ground. Rhetoric is nice, but policies are even better."

But Obama's rhetoric — and perhaps this speech in particular — will be monitored carefully throughout the Muslim world, says Brian Katulis, a senior fellow at the Center for American Progress. Thursday's speech may ultimately amount to no more than a sweeping restatement of policy, he says, but it will be important at that level nonetheless.

"It's important to highlight that, particularly during the transitions in Egypt, people in the region were closely watching and monitoring almost every utterance of the U.S.," Katulis says. "For all the talk about the U.S. being a spent power and not being relevant, people are concerned about what this particular president says."