Accessibility links
New Republic: Sudan May Be Slipping Into Civil War Abyei residents have fled their homes in fear of violence after Sudan seized the large border town. Rebecca Hamilton of The New Republic warns that a civil war may be imminent for the country prone to conflict.

New Republic: Sudan May Be Slipping Into Civil War

New Republic: Sudan May Be Slipping Into Civil War 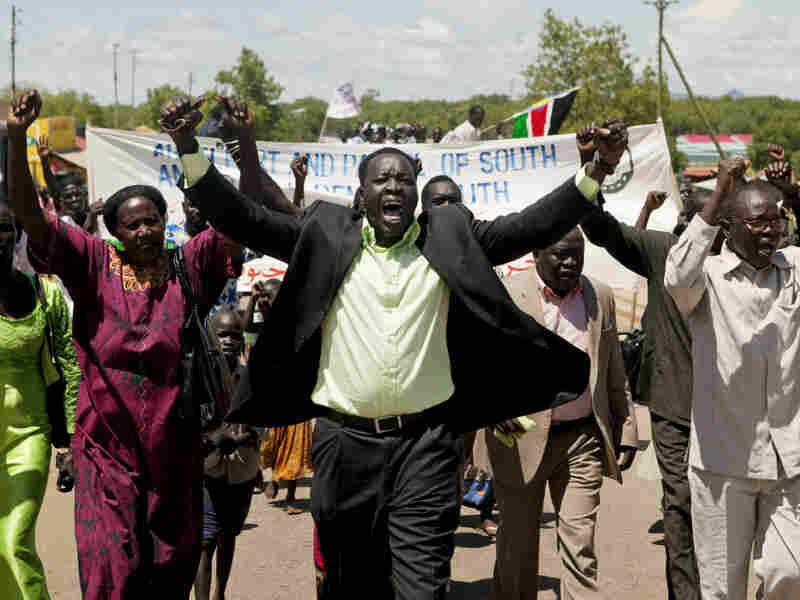 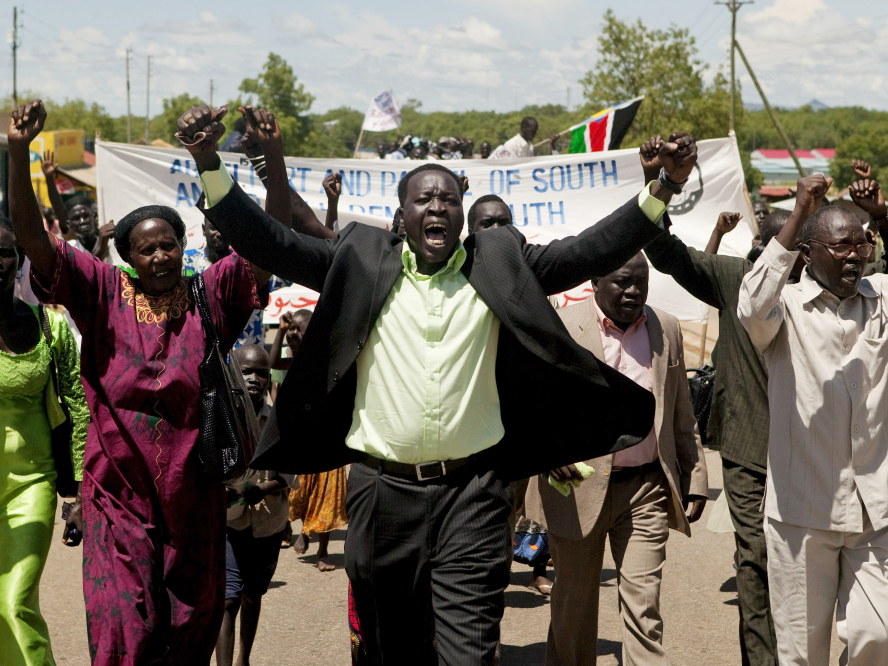 Rebecca Hamilton is the author of Fighting for Darfur and a fellow at the New America Foundation. Her Sudan reporting is supported by funding from the Pulitzer Center.

The residents of Abyei, the largest town of the contested border region between north and south Sudan, have deserted their homes in search of safety after the northern government took the town by force this weekend. The seizure of the town follows an ambush by a southern group on a convoy of northern forces who were withdrawing from the town under U.N. escort. According to U.N. deputy spokesperson Hua Jiang, 15 Sudanese army tanks rolled into the town on Saturday evening. Heavy shelling ensued, and a mortar was fired on the U.N. compound in the area, wounding two peacekeepers. Medecins Sans Frontiers reported treating 42 wounded in the weekend attack, adding to the human cost of violence in the area, which has claimed over 100 lives already this year.

The ongoing violence is a reflection of a political failure to resolve whether Abyei will belong to the north or the south when, following a referendum vote earlier this year, they officially split into two countries on July 9. Sudan observers have long predicted that Abyei might be a trigger for the resumption of civil war. Twenty-two years of conflict between the Sudanese government in the predominantly Arab and Muslim north and rebels in the mainly Christian and animist south came to an end with a 2005 peace deal. But the two sides were never able to agree on the status of Abyei, an area known for its lush grasslands in the rainy season and for a river, called Kiir by southerners and Bahr el Arab by northerners, that is a vital water source throughout the dry season. (Contrary to common misperception, the area is not rich with oil, although lucrative oil fields do lie just beyond its borders.) Today, Abyei's future has become infused with symbolic value that has made it particularly resistant to a negotiated settlement.

Whether the Sudanese government's seizure of Abyei will now escalate into the broader conflict many analysts have feared depends in large part on whether the South Sudan government exercises restraint, and whether it can convince the affected populations on the ground, who identify as southerners, to do the same. Unfortunately, such restraint requires faith in the possibility of a non-military solution, and events since the signing of the 2005 peace agreement have shown that military restraint brings little in the way of political gain. Indeed, despite international backing, agreements about the future of Abyei have rarely ever been implemented, leaving residents little reason to believe a resolution will come without a fight.

Abyei has been the subject of a series of failed agreements since 2005. First, an Abyei Protocol was supposed to provide a joint administration for the region and determine its geographical boundaries. When the Sudanese government's ruling National Congress Party refused to accept the boundaries proposed, implementation of the protocol stalled. Uncertainty fuelled tension in Abyei, and fighting broke out between northern and southern troops in May 2008. Human Rights Watch reported that northern troops and their allied militia razed much of the town, forcing 60,000 civilians to flee. At that time, effective high-level diplomacy convinced the southern leadership not to retaliate, and the north withdrew its forces; the violence, while devastating, did not spread beyond Abyei.

Following the 2008 violence, a diplomatic scramble ensued. An Abyei Roadmap was agreed to, and the boundaries dispute was sent to arbitration in The Hague. The 2008 agreements confirmed the central feature of the 2005 Abyei Protocol: The status of Abyei would be decided by a referendum, held simultaneously with South Sudan's self-determination referendum. But, while the South Sudan referendum went ahead this January, with 98.5 percent of voters choosing independent nationhood, the two sides could not agree on who constituted a "resident" for the purposes of voting in the Abyei referendum. The Sudanese government argued that the Misseriya, a nomadic group from the north who travel through Abyei in the dry season to graze their livestock, should be allowed to vote. The South Sudan government argued that only those who live in Abyei year-round, mostly the Ngok Dinka, a southern ethnic group, should participate. In the end, the Abyei referendum was sidelined.

Since then, political rhetoric has heated up on both sides. The South Sudan government recently included Abyei as part of its territory in its draft constitution, while, at state elections earlier this month, Sudanese President Omar Al Bashir told voters in the Misseriya stronghold of South Kordofan that Abyei "is located in north Sudan and will remain in north Sudan." The rhetoric has been accompanied by an escalation of both northern and southern troops in the area. Imagery obtained by Satellite Sentinel, a joint venture of the Enough Project and the Harvard Humanitarian Initiative and spearheaded by Hollywood actor George Clooney, has shown the amassing of both tanks and air power on the northern side in recent months. The U.N. has brokered repeated agreements for the north and south to withdraw the troops, with the latest agreement being signed just last week. But so far, none of those agreements have been fully implemented.

For the moment, the South Sudan government is saying it will not retaliate against the seizure of Abyei town. Instead, South Sudan's Minister of Information Barnaba Marial Benjamin is calling on the U.N. Security Council to ensure the Sudanese government withdraws its forces, and, on Sunday, the U.N. Secretary General and the ambassadors for the U.S., France and Russia all obliged by calling on the Sudanese government to remove its troops immediately. But, as is often the case for the U.N. in Sudan, the question is whether it can back up its message with action in the face of the defiant Sudanese government, which has already rejected the call for withdrawal.

This weekend, as during the 2008 violence, U.N. troops in Abyei retreated to their bunkers as fighting escalated, indicating the international community's unwillingness to show muscle in Abyei. If withdrawal has to be negotiated instead, Khartoum will likely try to extract a high price, asking for a new deal that favors the north getting Abyei and offers better terms in the ongoing talks over the division of oil and other resources following the formal independence of South Sudan on July 9. Without question, rewarding Khartoum for its seizure of Abyei would send the wrong message to all parties. Yet allowing the negotiations to stall for too long will also create risks.

If progress toward a resolution stalls, resistance in South Sudan to the government's call for restraint in Abyei will build from two sources. The first are those within the southern government who hail from Abyei and who fought as part of the south during the long war against the Sudanese government. These leaders, including Deng Alor, Edward Lino and Luka Biong, all believe that Abyei belongs to the south, and they must be convinced that their chances of securing their homeland as part of the new country are greater through negotiation than through military action. It will be a tough enough sell given recent history — tougher still if negotiations drag out and the north has demands that are unpalatable to the south. The second source of agitation will be the Ngok Dinka, who permanently inhabit Abyei town. I spoke with many of them earlier this year, just after the date of the promised Abyei referendum had passed. From traditional leaders to youth organizers, there was a uniform sense of betrayal; their compatriots were getting to determine their own future, while residents of Abyei were not. They had already begun to consider making a unilateral declaration that Abyei belonged to the south. Today, with north occupying Abyei town, the Ngok Dinka's frustration is at a boil.

Much rides on what happens in Abyei over the coming days and weeks. The international community, including the new U.S. envoy to Sudan, Arab and African regional bodies, and China, must unify to pressure to the north to withdraw its troops without concession, while the southern government must try to keep a lid on its people's anger over Abyei's years in violent limbo. Promises mean little to people who have been forced to flee for their lives, for the second time in just three years. Either a continuing occupation of Abyei by northern troops or a painful slowing of diplomatic negotiations between the two sides could set off fighting. If that happens, Sudan may find itself again in a state of deadly civil war.