Accessibility links
Collective Bargaining Curbs Spread Across The U.S. Wisconsin's Republican Gov. Scott Walker struck a nerve back in February with his bill to eliminate nearly all the collective bargaining rights of most public employees in the state. After Indiana and Ohio passed similar measures, other states have more quietly followed suit. 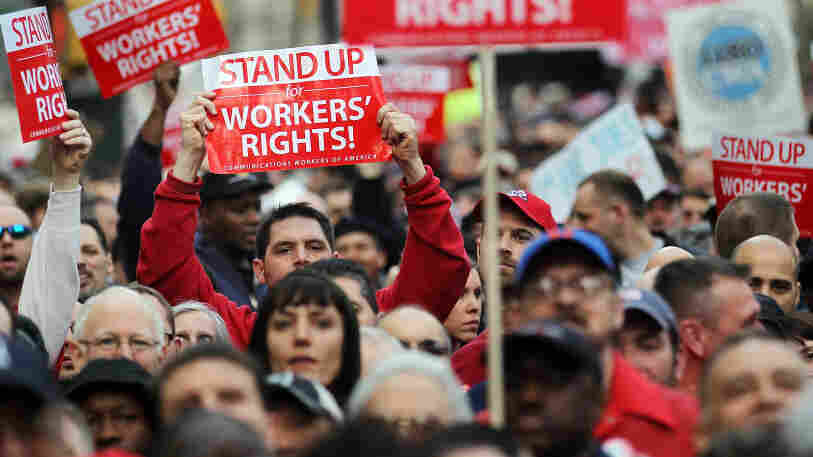 At a "We Are One" union rally in New York City marking the 43rd anniversary of the assassination of Martin Luther King Jr., protesters called for workers' rights in light of recent "anti-union" legislation in Wisconsin and Ohio. Mario Tama/Getty Images hide caption

Wisconsin's Republican Gov. Scott Walker struck a nerve back in February with his bill to eliminate nearly all the collective bargaining rights of almost all public employees in the state.

Tens of thousands of people marched, chanted and protested for weeks. The law passed anyway, but it hasn't taken effect yet because it remains tied up in the courts.

In Indiana and Ohio, lawmakers advanced similar proposals despite similar outrage — and those are now law.

Labor Legislation Across The U.S.

Source: National Conference of State Legislatures. The organization has created a database to track collective bargaining and union-related measures.

"It's a year that took us by surprise," says Jeanne Mejeur, who follows labor legislation for the National Conference of State Legislatures.

She says the number of bills introduced into state capitals this year seeking to restrict or eliminate collective bargaining rights of public workers is staggering — 820 in all 50 states and Puerto Rico.

In past years, she says, there have rarely been more than 100 such proposals nationwide.

And there's been another unusual thing, she adds. "The breadth of the bills. Far-reaching, groundbreaking types of bills that we were seeing was quite different from anything we'd seen in the past."

Naomi Walker, director of state government relations for the AFL-CIO, says it's been an incredibly rough and rocky year for workers.

"The legislatures have been introducing bills that really attack the middle class and attack workers in ways that we have not seen in recent history," Walker says.

A Matter Of Perception

But where some see an attack on workers' rights, others see a new era of fiscal restraint.

"It's incredibly encouraging for organizations like ours," says Barney Keller, spokesman for the conservative group Club for Growth.

Labor leaders say many of these anti-union measures go far beyond cost-cutting and attack the very existence of unions.

But that may not be the case everywhere — take Nebraska. This week, lawmakers there are expected to pass changes to the state's collective bargaining system, worked out with the union. Jess Wolf, president of the Nebraska State Education Association, says the two sides reached a compromise, avoiding a bitter public fight.

Wolf says he hopes Nebraska can serve as a model of compromise for other states. But with recall election campaigns that are sure to be nasty in Wisconsin this summer and a bitterly partisan tone to the battles over collective bargaining rights in other states, that may be unlikely.