Accessibility links
Netanyahu Pledges Compromises For Peace In a speech to a joint meeting of Congress on Tuesday, the Israeli prime minister thanked U.S. lawmakers for their unswerving support and laid down a hard line on any new peace talks with the Palestinians. 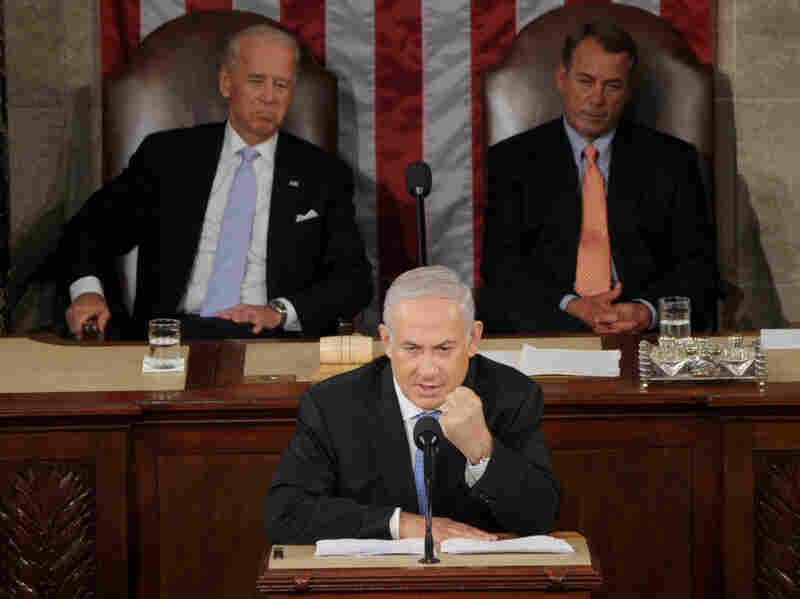 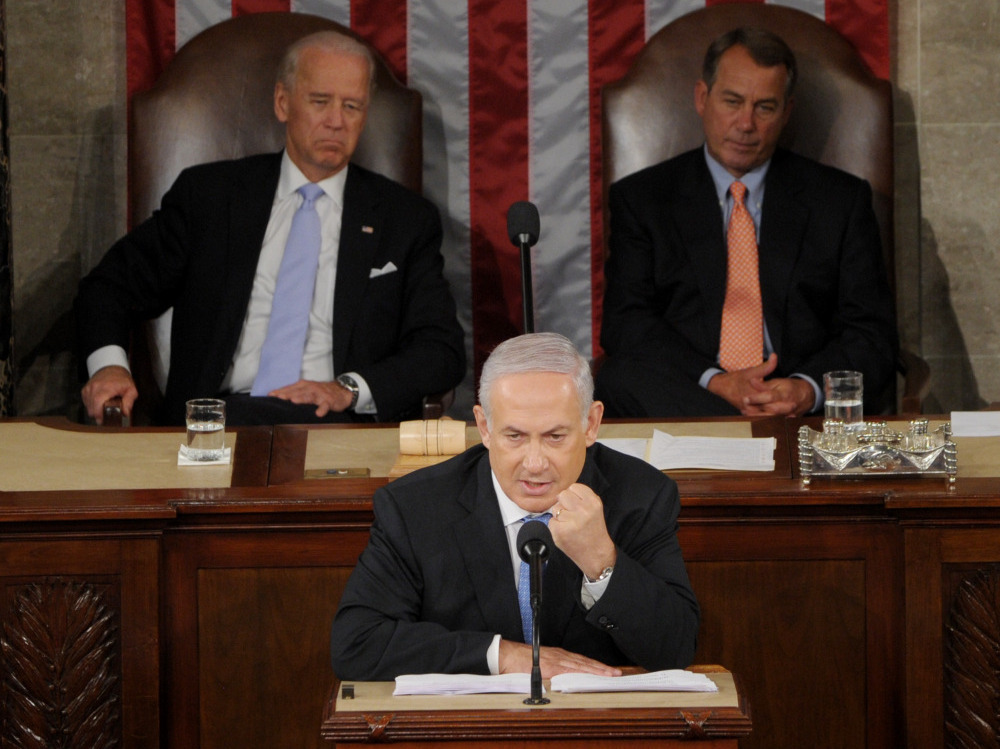 Israeli Prime Minister Benjamin Netanyahu had lawmakers on Capitol Hill jumping to their feet repeatedly Tuesday to applaud him as he addressed a joint meeting of Congress. For the Israeli leader, it was a chance both to thank them for their unswerving support and to lay down a hard line on any new peace talks with the Palestinians.

Not a seat was empty in the House chamber as Speaker John Boehner (R-OH) introduced the guest he had invited nearly two months ago: "I have the high privilege and distinct honor of presenting to you his excellency, Benjamin Netanyahu, prime minister of Israel."

Looking at ease and almost at home, Netanyahu hit it off immediately with a note of praise for his hosts, and solidarity.

"We stand together to fight terrorism," he said. "Congratulations, America, congratulations Mr. President — you got bin Laden. Good riddance."

More On The Borders

Netanyahu went on to praise the young people rising up against long-standing regimes in the Arab world, when he was suddenly interrupted by a heckler in the visitors gallery. The incident provided an opening for the Israeli leader to take a shot at Israel's enemies and praise its friends.

"You can't have these protests in farcical parliaments in Tehran or in Tripoli," he said. "This is real democracy."

Netanyahu called on the U.S. to send what he called an unequivocal message to Iran that America will not permit that nation to develop nuclear weapons. Turning to Israel's ongoing standoff with the Palestinians, he said a way must be found to forge a lasting peace.

"I'm willing to make painful compromises to achieve this historic peace," he said. "As the leader of Israel, it's my responsibility to lead my people to peace."

Some Israeli settlements, he conceded, will end up beyond Israel's borders.

"Now, the precise delineation of those borders must be negotiated. We'll be generous about the size of the future Palestinian state, but as President Obama said, the border will be different than the one that existed on June 4, 1967," Netanyahu said. "Israel will not return to the indefensible boundaries of 1967."

Netanyahu also declared that the problem of Palestinian refugees would have to be resolved outside the borders of Israel. As for the city of Jerusalem, whose eastern half is claimed by Palestinians, Netanyahu drew a hard line:

After the speech, the Israeli prime minister joined the five top Republican and Democratic congressional leaders in a show of solidarity before TV cameras. One of those leaders was House Minority Leader Nancy Pelosi (D-CA):

"Mr. Prime Minister, I think that it was clear from the response to your speech that our colleagues on both sides of the aisle from both sides of the Capitol believe that you advanced the cause ... of peace," Pelosi said.

The display of bipartisan support for Netanyahu and Israel is nothing new on Capitol Hill. But as University of Chicago political scientist John Mearsheimer notes, it comes days after the Israeli leader publicly lectured President Obama about the 1967 borders.

"The Republicans and the Democrats on Capitol Hill look like Tweedledee and Tweedledum, and President Obama looks like the odd person out," Mearsheimer said.

"There was nothing new — he didn't intend to say anything new," Miller said. "Again, it was not a negotiator's speech for a Palestinian constituency; it was a politician's speech — and a very effective one, I might add."

In 25 years of dealing with Netanyahu, Miller said, never had he seen him more effective than on Tuesday.

Netanyahu: Israel Ready To Make Painful Concessions; Palestinians Must, Too May 24, 2011