Accessibility links
Finding Love While Searching For Work Brian and Jennifer Barfield met at a networking group for unemployed professionals in St. Louis. They've been married for seven months now, and they've never really known normal, at least not in the job department. Having both husband and wife unemployed put stress on their relationship. 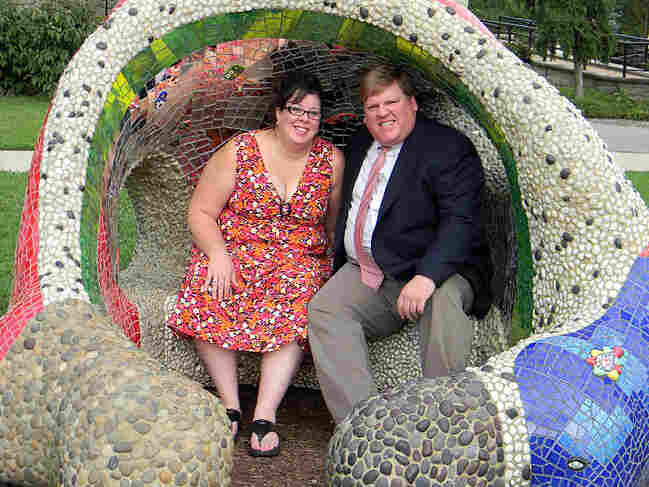 Brian and Jennifer Barfield met at a networking group for the unemployed. This is one of their engagement photos. Courtesy of the Barflields hide caption

toggle caption
Courtesy of the Barflields 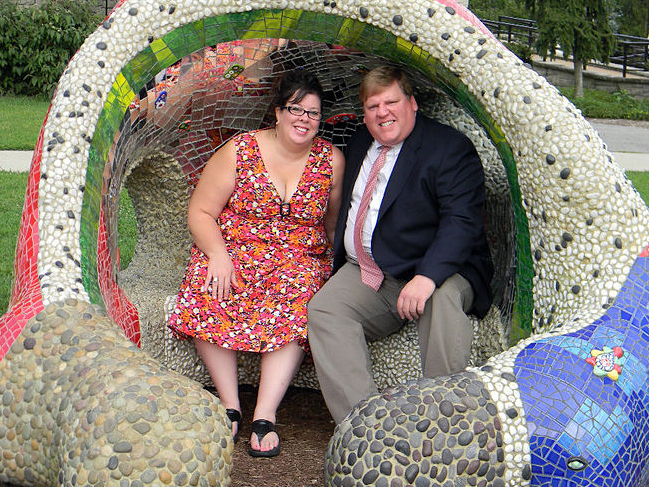 Brian and Jennifer Barfield met at a networking group for the unemployed. This is one of their engagement photos.

When someone becomes unemployed, there's financial pain, but often the struggles don't stop with money. It can change the family dynamic.

The quest to find work has dominated the relationship between Brian and Jennifer Barfield. They've been married for seven months now, and they've never really known normal, at least not in the job department.

The Barfields met at a networking group for unemployed professionals in St. Louis. They came from different backgrounds: Brian in manufacturing, Jennifer an IT professional.

"Blessings come out of the tough times," Jennifer Barfield, 47, told NPR at the start of our Road Back to Work series back in January. "I wouldn't have met Brian — our paths would never have crossed I'm sure — if we weren't both unemployed."

For part of their courtship, Brian had a job, but it didn't last. He was let go right after their honeymoon — which they spent at home to save money.

"We're hoping to have a honeymoon within, I don't know, the first two years of marriage," she says.

The Relief Of Finding A Less-Than-Perfect Job

Finding The Path Toward Employment In St. Louis

Stress On The Marriage

Living on unemployment and early withdrawals from Jennifer's 401(k), the Barfields haven't been able to entertain the idea of a tropical vacation or even the occasional fancy dinner. For the Barfields, date night is hopping in the car and taking a drive around St. Louis. On one recent night they drove out to the airport to watch the planes go by. Except for a little gas money, it was free entertainment.

At times the frustration of being unemployed put stress on their marriage.

Brian, 53, knows the havoc unemployment can wreak on a marriage. His first one ended after he initially became unemployed in 2007.

"We lost the house, and I got divorced. The kids went and lived with their mother," he says.

His daughters are both in college now. Back in February, Brian got a part-time weekend position that he hoped would be more regular, but it never really panned out. Meanwhile, the clock was ticking on Jennifer's unemployment benefits.

Then, a breakthrough: Jennifer was called back for a third interview with a company she had been talking to for more than a year. Sitting in the car in the parking lot before going in, she recorded her thoughts.

"I'm as ready as I can be," she said into the recorder. "I'm going to go in there and give it hell and hope for the best."

The Barfields have been keeping audio diaries throughout the year, to document their job search for NPR. After the interview she turned on the recorder again. "I've just left my interview and, well, it was good," she says. "They really liked me a lot."

After two years of searching, at times struggling to even get out of bed in the morning, Jennifer has a job. It's not permanent and pays $20,000 a year less than her last job. But none of that matters. She's just glad to be working again.

But if the Barfields have any hope of catching up on their bills, Brian needs a full-time job, too. And just as Jennifer is getting good news, it seems like all of Brian's leads have gone cold.

"Brian was making me laugh last night, saying he is now the house husband," Jennifer says with a chuckle. "And he is. He does the cleaning and the dishes and sometimes the cooking."

Brian may joke about it, but the idea that he isn't the breadwinner drives him crazy.

"She's working, so every dollar she earns is one more under my nose that I didn't earn, you know," he says. "I'm not contributing, and there's a lot of pressure."

So, when the company where he works occasional weekends offered him a seasonal position just for late spring and summer, Brian jumped at it.

"It's supposed to be for college kids but I applied for it because I'm not doing anything else in the meantime," he says. "So I might as well earn some cash."

The seasonal pay is about half of what regular employees get. Brian hopes he'll impress company managers enough to get hired permanently.

Now they're both working, but it's still not what most people would consider normal. Jennifer works days and Brian works overnight.

"But we can still do whatever we want on the evenings," Brian says with an upbeat tone. "We still have dinner together. We can still go shopping. It's just when she goes to bed I go to work, and when I go to bed she goes to work."

They still have a date night on Fridays, and they still go for drives. For the first time in their marriage, the Barfields are able to focus on something other than finding a job: each other.