Accessibility links
Jonny Greenwood, Glass And Ligeti: An Evening Of Premieres And A Rarity An exciting premiere of music by Radiohead's Jonny Greenwood, Philip Glass' take on David Bowie and Brian Eno, and finger-shredding sounds from Gyorgy Ligeti. 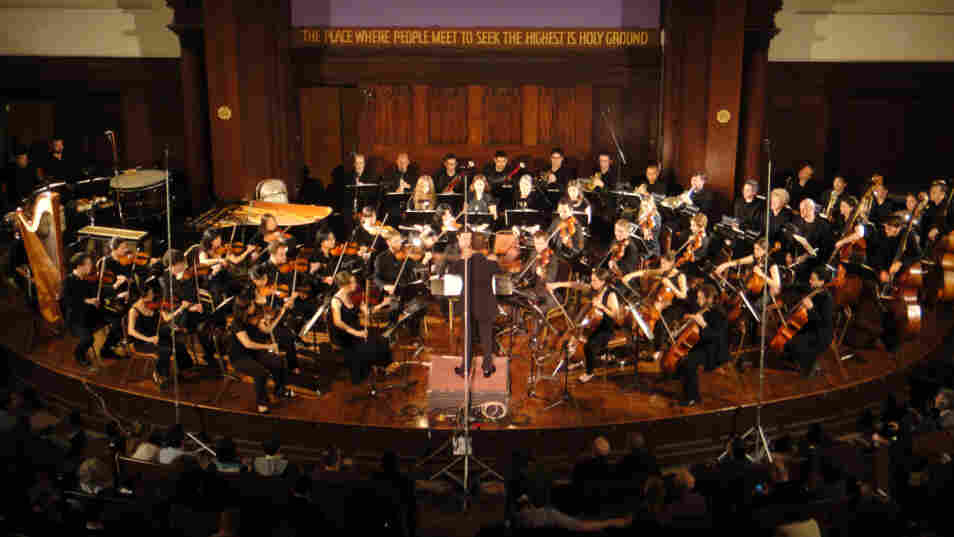 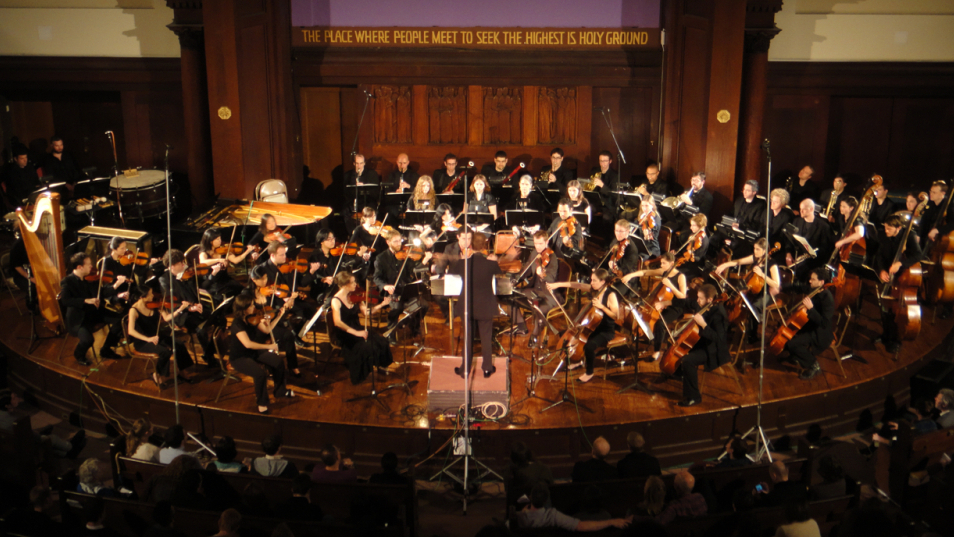 Brad Lubman, the Wordless Music Orchestra, and Signal Ensemble play live on May 20, 2011 at New York's Society for Ethical Culture.

Richie Clarke/courtesy of the artists

Jonny Greenwood, Glass And Ligeti: An Evening Of Premieres And A RarityQ2

Jonny Greenwood, Glass And Ligeti: An Evening Of Premieres And A Rarity

It sounded like the future: rock and classical crossed and combined in a May 20, 2011 concert at the New York Society for Ethical Culture. The evening of premieres and rarely heard works by Jonny Greenwood, Philip Glass and Gyorgy Ligeti was presented by New York's new-music service Q2

Conductor Brad Lubman led the Wordless Music Orchestra, whose 55 members included the JACK Quartet and players from Alarm Will Sound, the Signal Ensemble and quite a few other regulars in New York's new-music community.

Surprisingly enough, this concert was the New York premiere of Glass' "Heroes" Symphony, a 1996 piece inspired by David Bowie and Brian Eno's 1977 album Heroes. (On YouTube, you can even get an inside-the-orchestra experience of the premiere.)

There's the expected punch of Glass' churning rhythms juxtaposed to some liquid brass and wind lines, but Lubman and his players brought out some real surprises, including some very beautifully and gracefully shaped ostinati figures — so central to Glass' hallmark style, but here much more persuasive than they often are in other performances. Tucked in the middle of the piece is the sinuous "Abdulmajid," which takes a Bowie song (honoring his wife, Iman, whose last name provides the title of this movement) into frankly and unapologetically Orientalized terrain.

The centerpiece of the evening was the U.S. premiere of Greenwood's Doghouse for orchestra and string trio (with violinist Courtney Orlando, violist John Richards and cellist Lauren Radnofsky). While Greenwood is undoubtedly best known as the guitarist (as well as keyboards player and sampler master) for Radiohead and one of the band's songwriters, he was also a violist all the way through high school, and is an unabashed fan of contemporary classical music. One of Greenwood's favorite composers is Ligeti, and so Ligeti's moody and insanely challenging Chamber Concerto for 13 Instruments, played by the Signal Ensemble, provided the perfect lead-in to Doghouse. (As Q2 host Nadia Sirota noted in her live commentary, the third movement of the Ligeti has been known to make string players quite literally bleed.)

Greenwood has already adapted Doghouse for Anh Hung Tran's 2010 film Norwegian Wood (which is in turn based on Haruki Murakami's best-selling novel of the same name), just as his 2005 Popcorn Superhet Receiver -- also premiered by Wordless Music — was transformed into the score for the Oscar-winning film There Will Be Blood. As with so much of Glass' output, there's something innately cinematic about Greenwood's work, as well as a regal self-containment that evokes his hero Ligeti and is matched with a thrillingly dark tension.

The Society for Ethical Culture is only an occasional concert venue, but I can't help but be struck by the words suspended over the stage: "The place where people seek to meet the highest is holy ground." Perhaps that sentiment's a little too earnest for jaded downtown musicians, but what a perfect idea to serve as the backdrop for a concert so rich with ideas and emotions.