Accessibility links
Amid Trauma, Eyes Turn Toward Rebuilding Joplin Immediate needs following a destructive tornado, like food and clothing, have been addressed. Now one local resident is pressing hard to get trailers and homes put up to help meet the enormous new demand for housing.

Amid Trauma, Eyes Turn Toward Rebuilding In Joplin

Amid Trauma, Eyes Turn Toward Rebuilding In Joplin 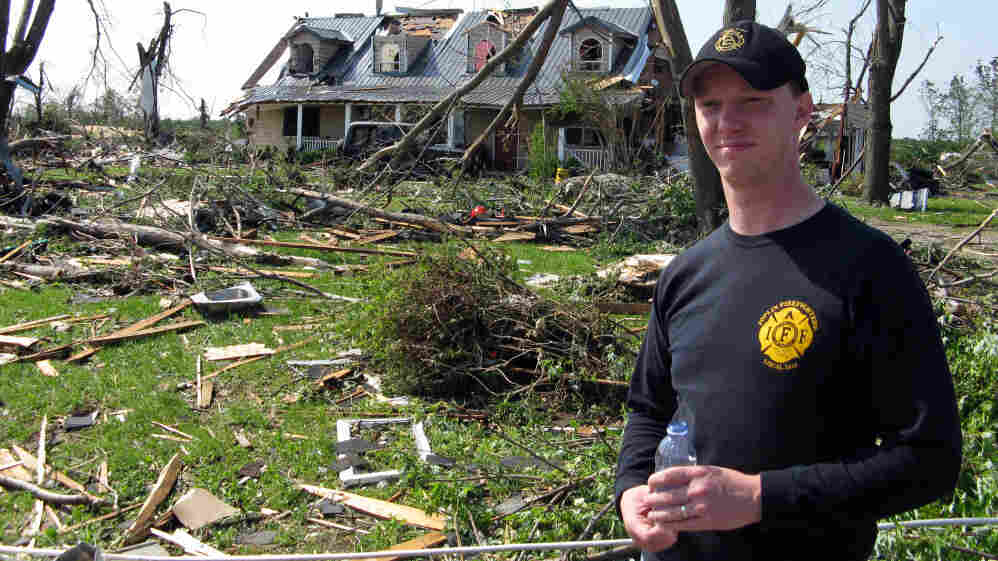 Brad Eichelberger, a Joplin firefighter and a friend of Thomas Herrod, stands outside his wrecked home in Joplin, Mo. "I'm all right. I'm relatively unhurt. We can rebuild all this," he says. Alan Greenblatt/NPR hide caption

Thomas Herrod was getting impatient. His hometown of Joplin, Mo., became an impenetrable maze Tuesday afternoon as police set up fresh roadblocks all over town.

"We've been through a bunch of storms," Herrod says. "This is the big one that we all worried about."

It has left Herrod with a long to-do list. He knows at least a half-dozen of his rental properties were destroyed by Sunday's tornado. He has three other houses he hasn't been able to drive by to see.

In addition, Herrod is trying to make the rounds of the many residential blocks turned into vast trash heaps, checking on the status of some of the 50 or 60 now-homeless families on a list from his church.

"You try to find a balance," Herrod says, "between taking care of your family and trying to run your business."

Herrod is the kind of person who keeps his basement stocked not just with water and generators but with a crowbar in case he'll need to claw his way out.

The tornado missed Herrod's house by a thousand feet or so. Once he determined that his family was OK, he immediately set out to see which neighbors needed help. 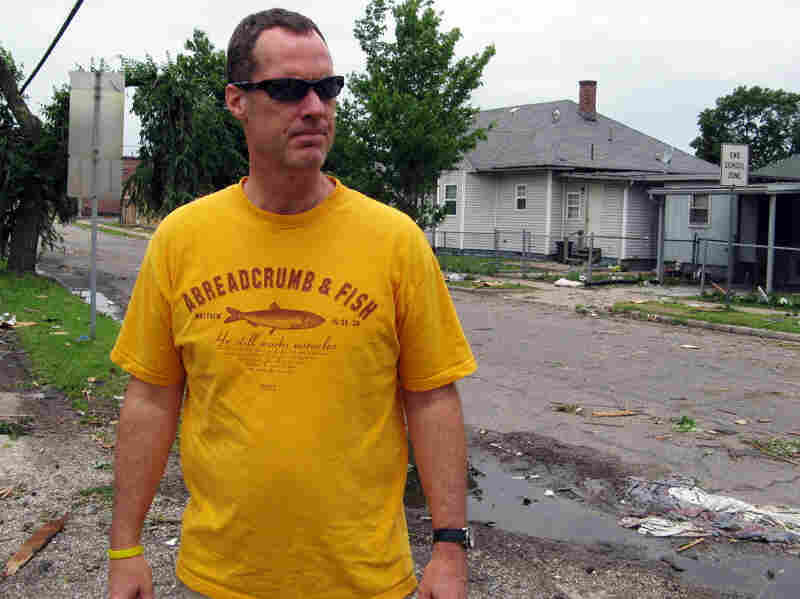 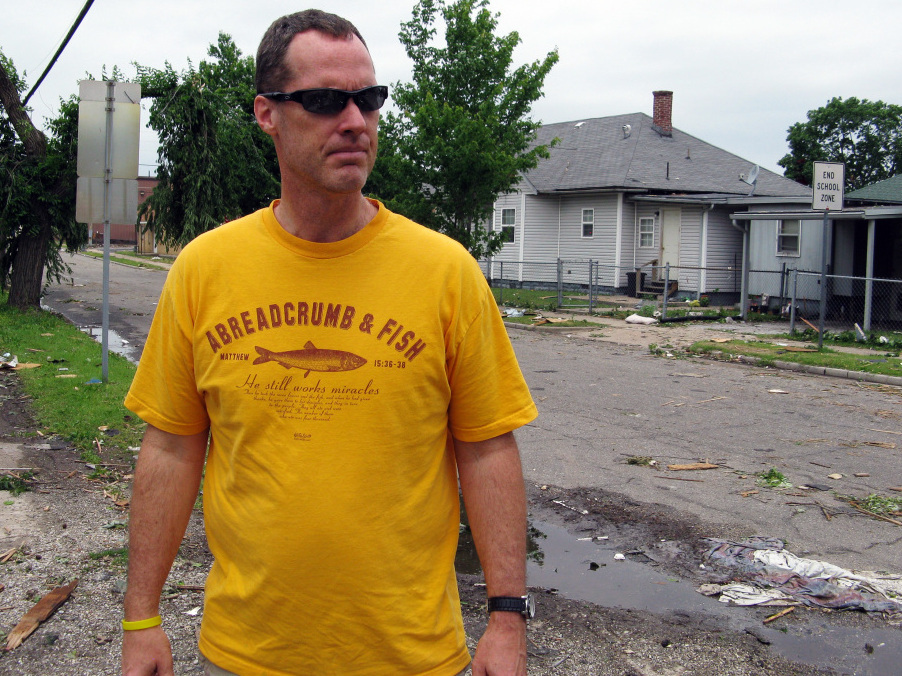 Herrod, 46, already had guests staying with him. The guests' daughter's house was flattened, so she and her family moved in, too. Herrod and his wife, Mary Lynn, have one daughter still at home, and their other daughter is coming up from Texas, hoping to help out.

A revolving cast of people drop by the house, reporting on the dangerous rise of Joplin Creek. Several need a place to stay, while others call to see if they can come by Tuesday night in the event they need to take shelter in Herrod's basement due to more expected storms.

"The house is here, the office can be worked on, all the people got out of the rental properties," he says. "We're good to go."

His biggest frustration is cellphone service, or the lack thereof. Juggling a pair of phones as he drives his red Toyota pickup around town, Herrod learns to get to the point quickly and then ask people how they're coping.

He's checking on insurance payments for his ruined properties and trying to arrange a deal to buy 10 trailer homes and put them on pads his cousin owns. Claims adjustors are walking up to properties and, if houses are clearly totaled, cutting checks on the spot.

"I appreciate your help, buddy," Herrod tells his insurance agent over the phone. "With your help, we'll get this city rebuilt."

Many people who still have homes haven't been able to get their leaky roofs covered. With so much rain since Sunday, a lot of what would have been salvageable has been wrecked.

"There's going to be a huge housing crisis," Herrod says. "People are going to be wanting homes."

On Tuesday morning, Herrod's father — who doubles as his real estate agent — sold the last of the houses he had available.

"That house has been sitting there for three months," Herrod says, "and now you've got a hundred people wanting to buy it."

Herrod instructed his father to sell at the pre-storm list price. He doesn't want to exploit the situation — but neither will he let properties go cheaply, as he's had to do in recent months.

Herrod bought his first fixer-upper when he was 18, using money an uncle had given him for a high school graduation present. He did 75 rehabs during his college years.

He decided he didn't want to spend the rest of his life doing that kind of work, so he got an MBA and took a job at a financial services firm. But he always kept some rental properties, and over the past decade he and a partner have built about 100 homes.

That house has been sitting there for three months and now you've got a hundred people wanting to buy it.

Thomas Herrod, regarding a house he's been trying to sell

A few years ago, he says, he was able to build five or six houses at a time. Since the housing slump started, he's only been able to get financing to put up one or two at a time.

That's why there's no inventory.

"The feds need to open up," Herrod says, "at least in this market."

His banker, David Moore, president at the Webb City branch of First State Bank, is hoping to turn on the financial spigot. But Moore knows the feds will keep close watch on each transaction, given the history of homebuilding scams run in neighboring cities following other storms.

"The economy for the next 10 years just changed overnight," Moore says.

Near his church, Herrod greets a group of volunteers — mostly teens, mostly from Kansas.

Herrod has run a lot of teams like this himself. He typically speaks in a quick Southern drawl, but his voice slows and grows calm when he talks about his faith. "I think there are a lot of good, caring people who aren't believers," he says, but faith is clearly one of his motivations.

Herrod says his church, College Heights Christian on Newman Road, has been "groomed for this moment." The church has the "horsepower," he says, to respond in a crisis.

Every year, College Heights sends out 2,000 volunteers on a Sunday to help people in their homes or through nonprofit agencies. When ice storms paralyzed Joplin a couple of years ago, the church mobilized 150 people to assist people without power.

Herrod was a leader in launching that response, says Jay St. Clair, community outreach minister at College Heights, which has been turned into an enormous warehouse of donated goods. Some of the clothes have gone home with Herrod, supplementing the few possessions his guests have been able to pick out of their own rubble.

No Time To Slow Down

Herrod's family has run businesses in the Joplin area for a hundred years. With so much coming at the community, he says, everyone has to stop and take a deep breath.

But Herrod clearly can't wait to get things going. He has plans in order and believes he can get construction under way on six houses in a week, if he can just get the permits and capital lined up.

He wants to put his crews back to work building, rather than cleaning up and clearing brush. Whenever he's able to check voicemail, it seems, there's another call from someone looking for a place to rent or buy.

"Food and clothing and all that will be taken care of," he says. "What's going to be the need is housing, and that's right up our alley."