Accessibility links
'Modern Family': All Kissing Aside, Why Are Mitchell And Cameron So Mean? Mark Blankenship writes that the persistently unsupportive dynamic between the only gay couple on a popular network sitcom has gotten so unpleasant that it's tempting him to change the channel.

'Modern Family': All Kissing Aside, Why Are Mitchell And Cameron So Mean?

'Modern Family': All Kissing Aside, Why Are Mitchell And Cameron So Mean? 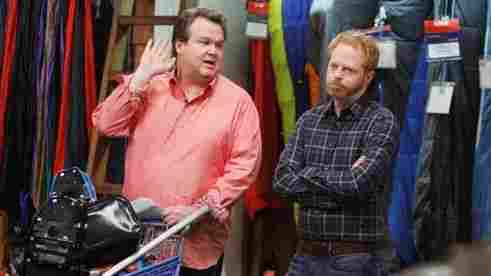 Tonight marks the end of the second season of ABC's Modern Family, which has been well-received by both critics and audiences. But as the Pritchett-Dunphy-Tucker-Delgados roll on, all is not well, at least in Mitchell and Cameron's house. In fact, this season, I've gotten so irritated by their relationship that it has almost turned me against the show.

And I'm not just frustrated because they never kiss. Some have criticized the series for not letting its gay couple share the same physical affection that Jay and Gloria (multi-generational, mixed race) and Phil and Claire (white, middle-class) share every week. However, in a charming episode from the beginning of this season, Mitchell explained that he's uncomfortable with PDA, and since the entire show is supposed to be a documentary, I can accept that he and Cameron aren't canoodling for the cameras.

But even without sexytime, they could at least be supportive. Despite all the bickering, that's what makes Modern Family so satisfying: the characters survive because they really like each other. Outlandish situations and savagely witty insults are leavened with reminders that we're watching people, not caricatures, and the balance is tart but sweet.

Except when it comes to Mitch and Cam.

They do plenty of fighting, but their arguments never resolve into real kindness. Recently, when Cameron was sick, Mitchell tried to scheme his way out of nursing him so that he could see a Lady Gaga concert. In the last scene, we learned that Mitch went to the show, but he tricked Cameron into believing he stayed home.

It's always like that: There's always something persistently selfish or competitive about how these supposed life partners treat each other. Granted, the other couples don't end every week in bliss, but they've all had storylines that hinged on their mutual affection. Even Phil and Claire's often feuding teenage daughters had an episode where an act of vandalism turned them into unexpected allies.

With Mitch and Cam, on the other hand, it's hard to see what they even like about each other.

That leads me back to the kissing: Despite their lack of public affection, Mitchell and Cameron have still been depicted as sexual beings. That's certainly good, since the world doesn't need another show where the gay men are fancy eunuchs helping straighties get dressed for the prom. Still, it would be nice if the guys could actually direct their heat at each other.

In this year's Valentine's Day episode, for instance, they learn that Mitchell's assistant Broderick has a crush on one of them, and they get a little too interested in figuring out who it is. In the end, they decide it's better if they don't know which fella Broderick likes, but that's not the same as deciding they don't care. The suggestion is that either of them would be tempted to cheat if they knew who had the chance.

So not only are Mitchell and Cameron not nice to each other, they don't even seem attracted to each other. It raises the uncomfortable question: Why are they together at all?

From a story perspective, it seems that their hateful dynamic is partly due to the fact that their only child is too young to hold up one side of a conflict. Every week, all three family units get in some kind of fight, but sometimes, Jay and Gloria bicker with their son Manny, while Phil and Claire get frustrated with any combination of their three kids. That leaves the pairs of parents free to support each other in dealing with the young 'uns. Mitch and Cam, however, only have baby Lily around the house, so to fit the show's dynamic, they can only be mad at each other.

But still: Surely, the show can find a way to let them occasionally just be nice to each other.

On a personal level, it's especially frustrating because I'm in a long-term gay relationship, and I'm hungry to see my experience reflected on screen. But that's an experience in which my partner and I always have each other's backs. When the only gay couple on a popular network sitcom refuses to ever do the same, week after week after week, I get irritated. I get exhausted. I get ready to change the channel.