Accessibility links
Time For Associations To Trade In Their Past? There are nearly 100,000 trade and professional groups in the U.S. Some of the oldest — stonecutters and tailors, for example — have been around since the 19th century. But in this age of teleconferencing and social networking, experts say, associations need to adapt to stay relevant.

Time For Associations To Trade In Their Past?

Time For Associations To Trade In Their Past? 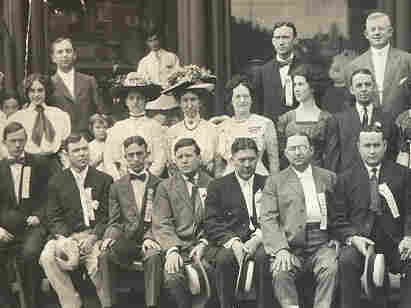 In 1919, the Illinois State Hotel Clerks Association held its third annual convention in Decatur, Ill. There are more than 92,000 trade and professional associations in the U.S. Library of Congress hide caption 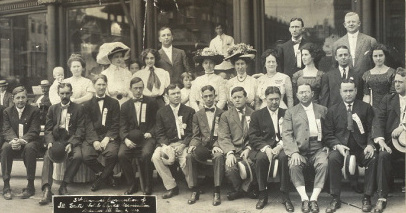 In 1919, the Illinois State Hotel Clerks Association held its third annual convention in Decatur, Ill. There are more than 92,000 trade and professional associations in the U.S.

Traditionally, the trade association has served as a clearinghouse for its members — a not-for-profit entity that enables its members to share knowledge and contacts. Some associations use their membership muscle to lobby Congress for favorable laws or money or tax breaks. Many stage annual conventions where members meet and freely exchange information, ideas and remedies.

But in this age of teleconferencing and social networking, the game has changed. Through Facebook, Twitter, LinkedIn and other websites, professionals stay in touch with each other — and with advances in their fields — around the clock. If they have a special problem, they no longer need to call the association and be connected to someone else with a similar problem — they can just go to the Internet for a solution. And who has the time or money for an annual convention anymore?

Which brings up an inevitable question: Are associations still necessary?

The history of the trade association in America goes way back. Some of the oldest, such as the Journeyman Stonecutters Association of North America, the Custom Tailors & Designers Association and the Plumbing-Heating-Cooling Contractors Association, were founded in the 19th century.

Over the years, the number of associations has grown. By 2010, according to the ASAE, once known as the American Society for Association Executives — an association for associations — there were more than 92,000 trade and professional associations in this country.

5 Associations You May Not Have Heard Of

But as the American workplace changes, some trade associations are having trouble adjusting. Look through various trade reports over the past 10 years and you will find that many associations — including those for plastics engineers, carpet cleaners and commercial printers, for example — have struggled to survive.

Futurist Jim Carroll, author of Ready, Set, Done: How to Innovate When Faster is the New Fast, says, "Many associations came together to represent a particular profession, area of interest or sport, or for some other reason. Yet that very reason is changing at a furious pace."

In 2010 Carroll wrote that many of the trade groups "remain stuck in a rut of complacency. They deliver the same old program. They focus on the same old issues, generate the same old knowledge, plan the same old conference, and have their agenda managed by the same old membership has-beens.

"Meanwhile, they bemoan the fact that membership is declining; that the Millennials seem to have little time or inclination to join them; and that the world is just becoming, well, too complex to deal with.

"So they form a committee, hire a consultant, study the issue, and lull themselves into a false sense of future-security.

"By doing so, they are almost guaranteeing themselves a march into oblivion." If an association "doesn't evolve at the same pace," Carroll says today, "or doesn't keep up, or doesn't define the future, it risks becoming obsolete."

One solution: An association must be in the business of providing "just-in-time knowledge" to its members, Carroll says. He defines it as "the right knowledge at the right time for the right purpose for the right strategy, all revolving around the fact that the knowledge is instant, fast and transitory."

Carroll's not the only one focusing on the precarious future of associations. Last year the American Society of Association Executives asked some "association thinkers" to imagine what the association world will look like in 2030.

Rebecca Rolfes, author of The Competition Within: How Members Will Reinvent Associations and a not-for-profit prophet, suggested the advent of the open-source association, in which "developer groups would have access to online collaboration tools where they could gather all that input, come up with ideas, and then put them out for the community of members to test and determine their value."

And Ann Oliveri, who writes The Zen of Associations blog, imagined a future in which associations are "recognized as knowledge ecologies, dynamically connecting theorists, practitioners and clients in adaptive collaboration, continuous loops of experimentation, application, feedback and refinement."

John Graham is optimistic about the future of associations in America. He should be. He is president of the ASAE, which is based in Washington.

And Washington — with its proximity to congressional power and money — is the epicenter of associations. In fact, "Washington is home to more associations than any other city," Graham says. The city is gilt by associations.

In fact, the professional trade association is such a mainstay in the nation's capital that Washington without associations would be like New York without hipsters or Los Angeles without starlets. There are roughly 2,500 trade and professional associations located in the Washington, D.C., metropolitan area, according to Graham. And "the numbers continue to go up every year as new industries, professions and causes emerge that warrant representation."

New associations, according to Graham, "tend to follow emerging industries and areas of high growth in the business sector, so it makes sense that you might see new associations forming in areas like biotech, health care, alternative energy and electronic commerce."