Accessibility links
Putting The Bride (And The Laughs) In 'Bridesmaids' Actress Maya Rudolf and director Paul Feig, of the movie Bridesmaids, talk about making a raunchy comedy starring women, from what they thought when they first read the script to the challenge of directing a scene involving food poisoning and wedding dresses. 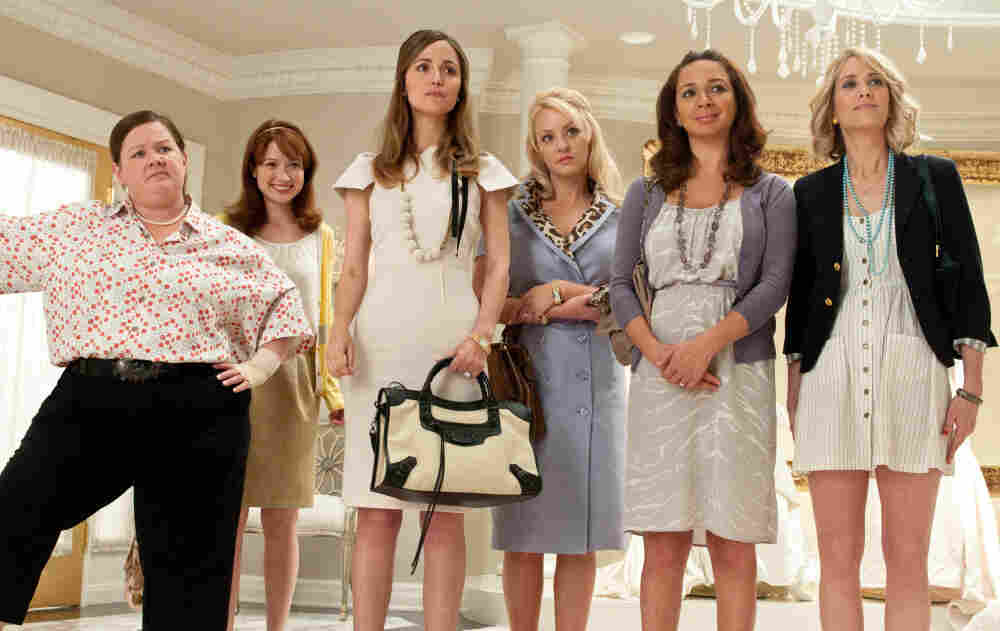 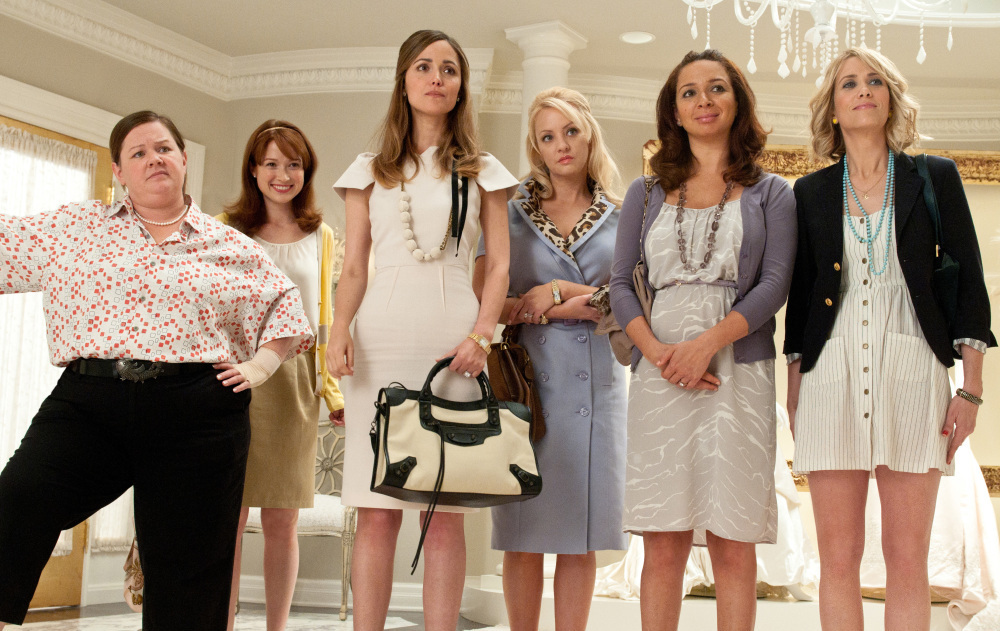 The second biggest movie in the country last weekend — the biggest if you don't count sequels to films based on theme-park rides — had all the ingredients of a popular comedy: debauchery, lifelong buddies and gratuitous flatulence. Yes, it was a Judd Apatow flick — he produced the film, which was directed by his longtime collaborator Paul Feig — only unlike most of the producer's male-populated coming-of-age comedies, all the starring roles in Bridesmaids were filled by women. And while audiences weren't sure if it was going to be a layer of pink paint on blue humor, it stood wonderfully on its own two high heels.

The bride in Bridesmaids is played by the veteran comedian Maya Rudolph, who appeared for nine seasons on Saturday Night Live before leaving the show in 2007. It was there that Rudolph met Kristen Wiig, the star and co-screenwriter of the movie, along with Annie Mumolo. The film revolves around the way the relationship between two best friends changes after Rudolph's Lillian tells Wiig's Annie that she's gotten engaged.

Forget Bridezillas And Frenemies, 'Bridesmaids' Is The Real Deal May 15, 2011
'Bridesmaids': A Raunchy, Hilarious Chick Flick May 13, 2011

Speaking with All Things Considered's Michele Norris, both Rudolph and Feig said that the film was something they both immediately wanted to be a part of.

"Boy, when I read it, you know, I know Kristen's voice so well and I love her writing and I love her take on things. And she and Annie just wrote this really funny script that just had these great fleshed-out characters," Rudolph says. "I was like, 'I wanna be in this movie!' "

Feig says that desire wasn't a problem for the film's producers.

"It was a real no-brainer for us to have Maya in this because we knew the whole movie hinged on the friendship between Kristen and Maya's characters and so, you can obviously cast, there are great actresses, obviously, who can summon that up, but we wanted to make sure that there was that familiarity and that friendship between them that you don't need to write to. Because there's nothing worse than that turgid dialogue like, 'Oh Annie, I've known you for 20 years,' " Feig says. "So the chemistry that they have, because they are friends from SNL and they've known each other, just comes through so easily."

Feig adds that the film's opening scene, set in a diner where the two friends trade jokes and advice, was the result of letting Rudolph and Wiig improvise for hours.

"It's just so alive and it feels not like these movies sometimes can feel because they get very overwritten and you lose that spontaneity that happens in real life," he says.

"We talked about it for a long time in rehearsal and we really wanted to establish that this is a bit of a ritual, that these women get together and without explaining it ad nauseam, that they're really there for each other," Rudolph adds. "What I love about it is you really see what it's like when two good friends get together. You do a lot of laughing. You talk about the stuff that's driving you crazy and the guys or your job or whatever it is, but at some point you just end up laughing and being stupid."

The scene most frequently referenced in discussions of the movie involves food poisoning at a wedding dress shop — a virtuoso set piece of scatological humor that has become the focal point for both the celebrations and criticisms of the movie. But Feig says that pushing the envelope wasn't the point.

"The whole genesis of that scene was, you know, Judd and I really don't like to put anything in a movie that's just there for laughs. It all has to be in service of the story," he says. "And we had this part of the story where we had to show that one of Annie's problems is that she never admits that she's wrong. She won't back down. And she screwed up because she took people to a cheap restaurant because she couldn't afford it and tried to pass it off like it was cool. And the comedy of it is twofold. One is that in the face of undeniable evidence, she is refusing to admit that she screwed up. And so for us the comedy is how extreme can we make the evidence that she is pretending is not happening. And the other is just the comedy of women in a situation that is bad trying to pretend that nothing is wrong."

"There's that satisfying moment watching the movie with an audience when everything finally erupts into a very visual display of being sick," Rudolph says, imitating an audience's disgusted groan. "It's almost weirdly satisfying."

But Rudolph says that she was surprised when the more antagonistic reaction to that scene started rolling in.

"I really do come from a place where funny is funny and I don't think about my lady parts very often when making comedy. And I think one of the most fun things about being gross or something like that — it's the funnest way to get another comedian to laugh," Rudolph says. "What I felt about this movie was that it's just so funny and it's so good and there are so many great people in it that I was really excited for people to see it. Because I loved it. And this was a combination of people that have known each other for many years. I think Kristen and Annie really knew of great people. They had the knowledge that they could have this great group. And so I think they came from a place of, 'How can we make this as funny as possible.' I didn't see them setting out to change anything. But that's probably for the better."