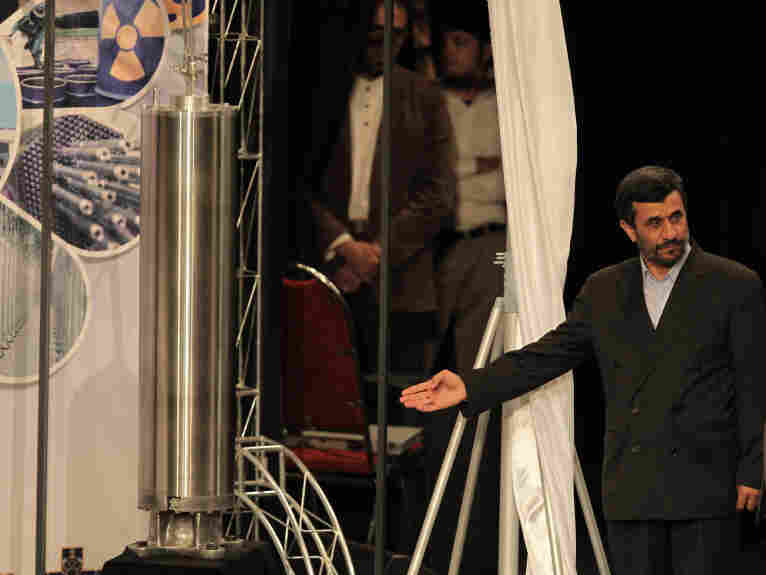 Iranian President Mahmoud Ahmadinejad unveils a sample of the third generation centrifuge for uranium enrichment during a ceremony to mark the National Nuclear Day day in Tehran on April 9, 2010. A report from the International Atomic Energy Agency says production of low enriched uranium at Iran's Natanz facility is on the rise. Behrouz Mehri/AFP/Getty Images hide caption 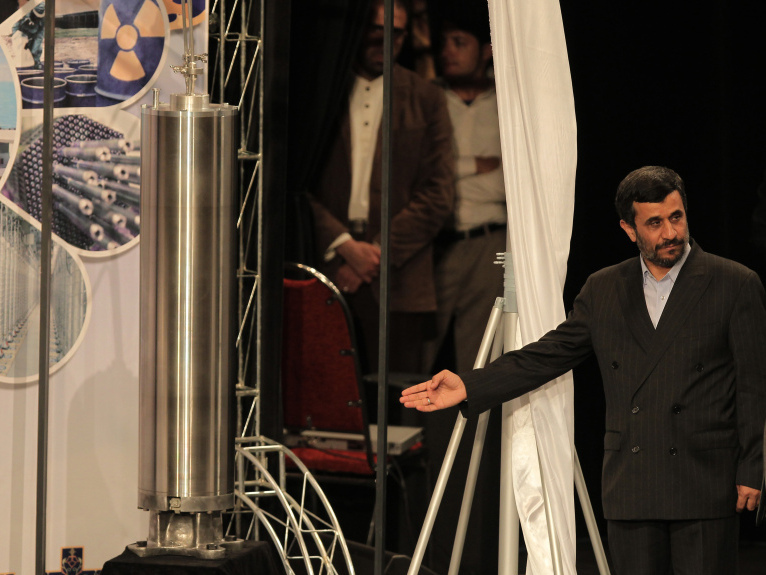 Iranian President Mahmoud Ahmadinejad unveils a sample of the third generation centrifuge for uranium enrichment during a ceremony to mark the National Nuclear Day day in Tehran on April 9, 2010. A report from the International Atomic Energy Agency says production of low enriched uranium at Iran's Natanz facility is on the rise.

The International Atomic Energy Agency has released troubling new reports on the nuclear activities of Iran and Syria.

The Iran report indicates the production of enriched uranium there is increasing and raises more questions about Iran's possible research into the military applications of nuclear technology.

In the Syria report, the United Nations' nuclear watchdog has reached the conclusion that Syria was very likely building a clandestine nuclear reactor when Israel bombed the site in 2007.

Iran's production of low-enriched uranium is on the rise, and though the facility at Natanz is far from full capacity, it is producing more per month now than in the past.

Iran's enrichment activities were hampered by breakdowns and by a computer attack last year caused by what's come to be known as the Stuxnet worm.

But the IAEA report suggests Iran has surmounted those difficulties, says David Albright, director of the Institute for Science and International Security in Washington.

"Iran's increase in its low-enriched uranium output by 30 percent since last summer shows ... that it's getting Natanz to work better, and shows that probably any leftover effect from Stuxnet has been reduced."

The IAEA report does confirm that Iran has not diverted any of its known uranium stocks from civilian to military uses.

The report focuses some attention on the gas centrifuges that are used to manufacture enriched uranium. Since Iran started its enrichment about four years ago, it has used only first-generation centrifuges obtained from Pakistan.

Centrifuge technology has improved since then, and Iranian leaders have boasted that they intend to install new, far more efficient centrifuges in the future. But the IAEA has found no actual evidence that Iran has installed the newer technology.

There are also ongoing questions about research Iran has done on aspects of nuclear weapons technology. The agency has pressed Iran for years to clear up questions about its military nuclear research. Iran has left many unanswered.

One concerns experiments with a neutron generator and uranium deuteride — this is what might be called a trigger for a nuclear explosion. The agency believes Iranian scientists worked on this particular piece of technology for as many as four years, perhaps longer, says Albright.

"This particular piece is important because it doesn't have any other uses that really are legitimate or credible," Albright says. "And it also shows that Iran is working on fairly sophisticated components of a nuclear weapon. I mean there's a much simpler way to do it. If you want to perhaps do it more secretly, you may want to go this route of uranium deuteride neutron initiator."

The agency's report does not assert that Iran is currently engaged in this work — only that the agency suspects it did the work before and may have continued it in some capacity.

On Wednesday, the head of Iran's atomic energy agency said simply that the IAEA's questions are based on fabricated documents. 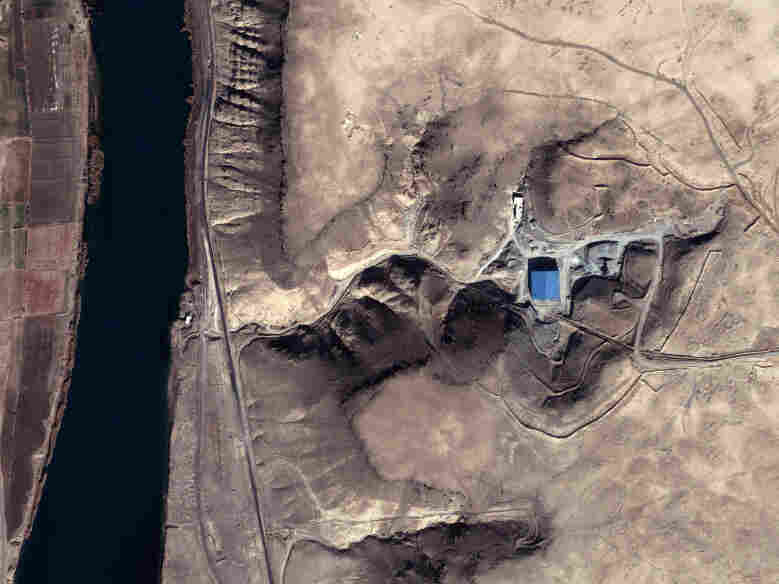 This site in Syria was bombed by Israeli jets more than three years ago because it was suspected to be a nuclear reactor. It is now showing new construction. DigitalGlobe/Getty Images hide caption 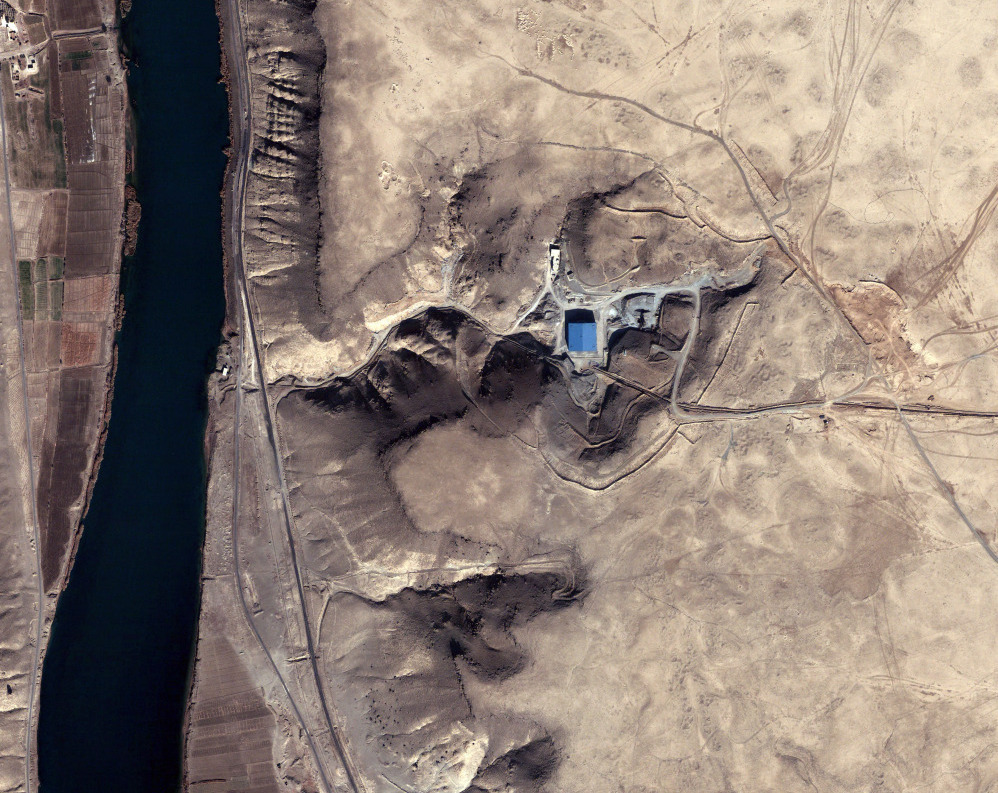 This site in Syria was bombed by Israeli jets more than three years ago because it was suspected to be a nuclear reactor. It is now showing new construction.

On Syria, the agency says it's reached the conclusion that a facility under construction there that was bombed by Israel more than three years ago was "very likely a nuclear reactor, similar to one in North Korea."

The IAEA has been stymied for several years in its investigation of this incident. Syria allowed one inspection of the site, after the rubble was removed. There are three other locations in Syria believed to be related to this site, but Syria has not permitted agency inspectors to visit those.

The investigation has reached a dead end, says Albright.

"The IAEA has been under pressure," he says. "They can't let this slide. It's bad for the credibility of the IAEA if Syria gets away with it."

State Department spokesman Mark Toner indicated the U.S. wants to see this discussed by the IAEA in an upcoming meeting of its board of governors.

"The attempt by Syria to construct a clandestine nuclear reactor site is obviously a matter of concern, and we fully expect that the IAEA board will address this issue when it meets, I believe, next week," Toner says.

There's an expectation that the U.S. will urge that Syria be referred to the U.N. Security Council for possible economic sanctions.