Accessibility links
What's Behind 2011's Deadly Tornado Season? The season isn't over, but tornado outbreaks have already struck urban areas and killed more than 500 people. A meteorologist puts the destruction in historical context, and explains that in the long term, tornadoes aren't becoming more frequent. 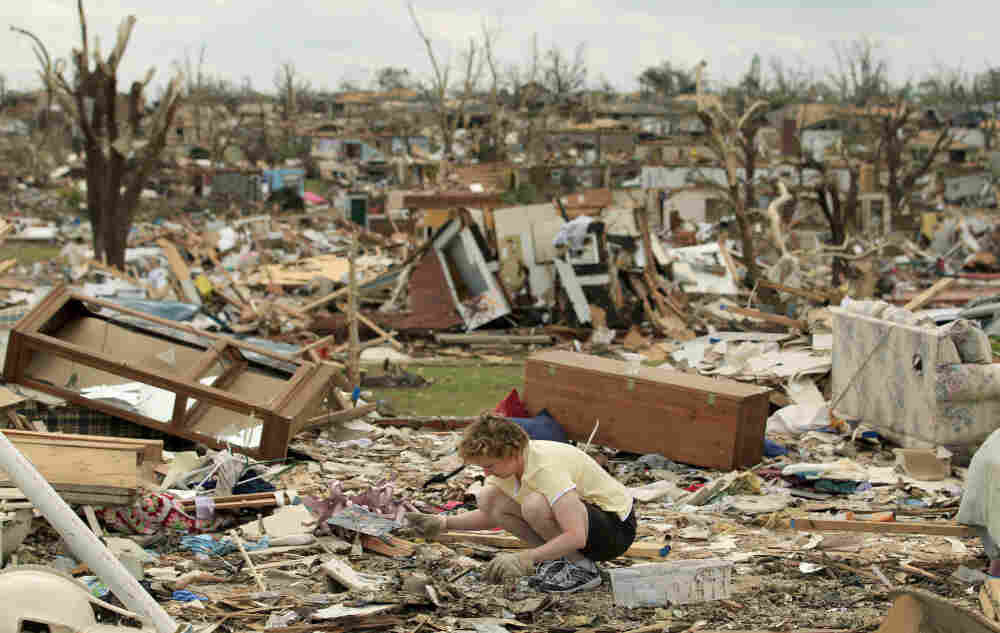 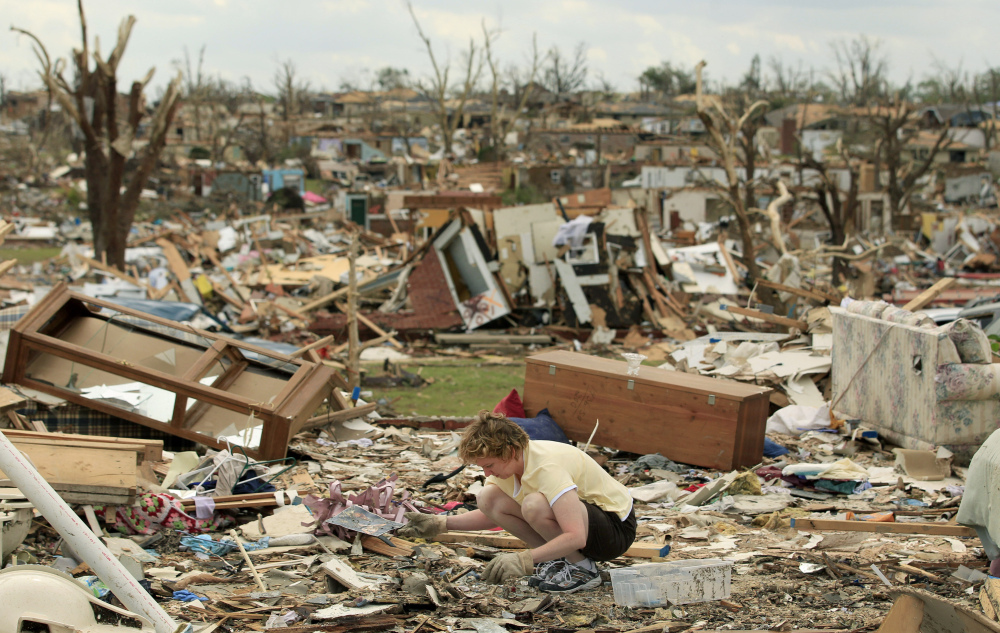 Debbie Surlin salvages items from her parent's home in Joplin, Mo. The tornado that struck Joplin on Sunday killed at least 125 people.

This year has been the deadliest year for tornado outbreaks since 1953. More than 500 people have been killed by twisters in 2011. The high death toll has led many to ask if tornadoes are becoming more frequent — and more deadly. NPR spoke with Dr. Harold Brooks, a meteorologist with the National Severe Storms Laboratory at the University of Oklahoma, about trends in tornado activity.

Is the frequency of tornadoes increasing?

April certainly had historic tornado tallies, Brooks says, but May does not stand out when you look at the number of tornadoes. Tornado outbreaks on May 24 and 25 have brought the month's total close to average levels, but "until then, May was one of the slowest months on record," he says.

What stands out most about this year's twisters is the number of deaths. But Brooks says there's no evidence that in the long term, tornadoes are becoming more frequent. Our perception of the frequency of tornadoes is skewed, he notes, because we naturally focus only on storms that have a large human impact. For example, the tornado that touched down in Joplin, Mo., on Sunday, killing at least 125 people, wasn't a statistical outlier. In fact, it came on a day with fewer-than-average tornadoes.

"If that tornado was five miles north or five miles south, no one outside the meteorological community would have noticed," Brooks says.

It seems like urban areas are being hit especially hard this year. Is this part of a trend?

Birmingham, Ala., Tuscaloosa, Ala., and Joplin were all hit this year. But that's not evidence that tornadoes are becoming more common in cities, Brooks says. A tornado struck downtown Nashville, Tenn., in 1998, another Oklahoma City in 1999. Most major cities in tornado-prone states have seen some tornado activity over the past century.

"We tend to have a short-term memory," Brooks says. Current tragedies loom larger than historic events.

Are certain cities more vulnerable than others?

Oklahoma City, Kansas City (Kansas and Missouri), St. Louis, Birmingham, Memphis, Tenn., and Jackson, Miss., are all located in states where tornadoes are common. But Brooks says these cities can become less vulnerable to twisters if their citizens are educated about natural hazards and prepared to respond.

"Yesterday morning, I heard it on my TV in the living room — 'This is one of the days when you need be careful on your way home from work,' " Brooks says.

Oklahoma City residents have learned to be attentive to weather information when severe storms threaten.

"Even my teenage children are aware of the fact that there are certain days out of the year when we don't watch DVDs and the Wii is not played," Brooks says.

Why has this year brought so many tornadoes?

Brooks says scientists don't really know why the conditions that spawn tornadoes have been happening more frequently this year. It's not clear what role, if any, climate change is playing — or La Nina, the cooling weather pattern that happens on a roughly five-year cycle.