Accessibility links
How To Survive A Tornado: Plan Ahead, Avoid Debris Devastating tornadoes have struck the U.S. this year, killing about 500 people. Experts say the death toll could have been lower if more people knew the best way to protect themselves. Myths about the correct thing to do — like opening windows during a storm — cause even more harm. 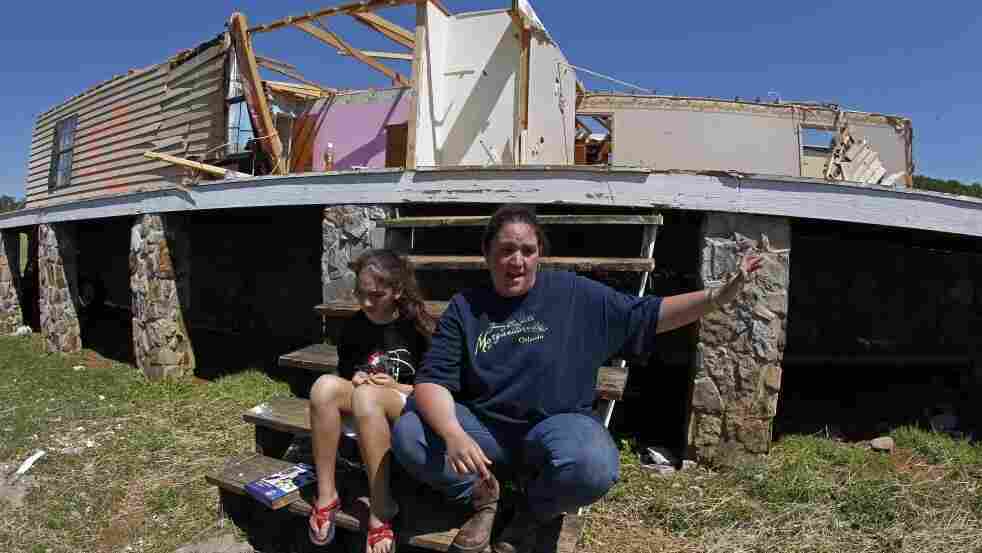 Amy Womack and her daughter, Alexis Nelson, sit on the front steps of her parents' house in Cleveland, Tenn., in late April. Womack says her father urged her and 13 relatives and friends into the basement before a tornado hit; she credits him with saving their lives. Wade Payne/AP hide caption 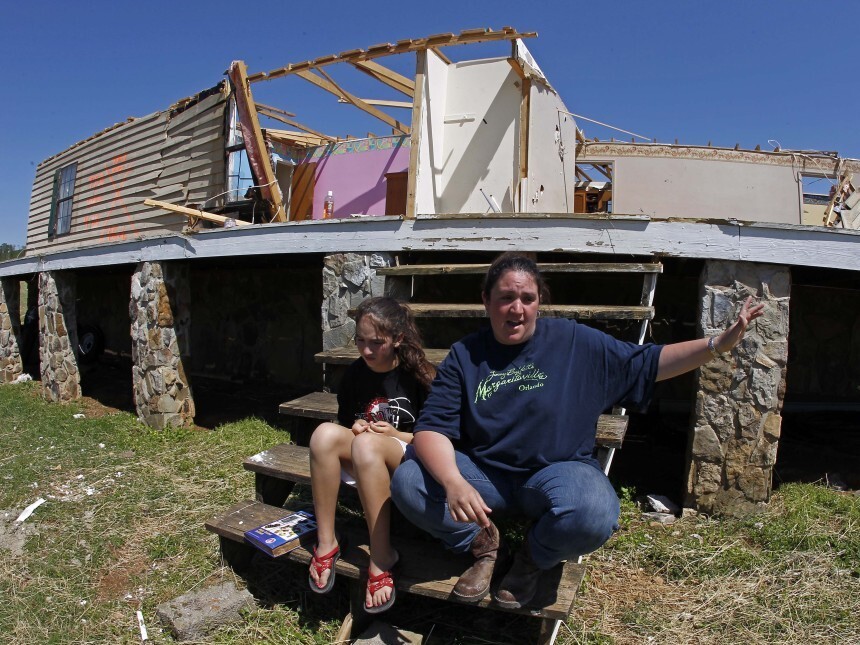 Amy Womack and her daughter, Alexis Nelson, sit on the front steps of her parents' house in Cleveland, Tenn., in late April. Womack says her father urged her and 13 relatives and friends into the basement before a tornado hit; she credits him with saving their lives.

Tornadoes have killed about 500 people in the U.S. so far this year. But experts say that number would be much lower if everyone knew how best to protect themselves when a twister approaches.

For starters, anyone who lives in a place that gets tornadoes needs to have a plan, says Harold Brooks, a research meteorologist at the National Severe Storms Laboratory in Norman, Okla.

Brooks says his family's plan involves a shelter they added when they remodeled their house.

What To Do During A Tornado

"The walk-in closet in our master bedroom suite is six inches of reinforced concrete with a steel door on it," he says. "We can get in there with children, pets, valuables and things like that."

The concrete offers protection from things like a 2-by-4 ripped from a wall and propelled by winds that can exceed 200 mph, Brooks says. The impact from that sort of projectile is "like getting hit by a baseball bat," he says.

"Bricks that fly through the air are also causes of major injuries," Brooks says. "As structures start to fall apart, [they] produce missiles that can hit you or impale you," he says.

People who don't have a tornado shelter can still do a lot to protect themselves from flying debris, Brooks says.

The important thing is to put as many walls as possible between you and the wind, he says. That usually means going to a closet, an interior bathroom or even a small hallway.

"Once you get in there, something like a bicycle helmet or a football helmet on your head can dramatically improve your chances of surviving without significant injury," Brooks says.

But a lot of people don't do any of that, tornado experts say. And what they do instead can make things worse.

For example, some people open the windows in a house, thinking it will prevent the house from exploding in the low-pressure eye of a tornado.

But the exploding house idea is a myth, Brooks says, adding that open windows can cause another problem, "because once the wind gets inside your house, it essentially can start to lift the roof up off the house."

Before And After Images Of Joplin, Mo.

People in cars are also prone to do the wrong thing when they realize a tornado is close, says Robin Tanamachi, a researcher at the Center for Analysis and Prediction of Storms in Norman.

Tanamachi has spent the past eight years chasing severe storms in trucks filled with radar gear.

"One thing that we've observed quite frequently is that people will try to shelter under highway overpasses," she says. "And that's a tremendously bad idea."

Yet the strategy has become very popular, thanks to a video from 1991 that shows a news crew hiding under an overpass as a tornado goes by.

Unfortunately, the tactic usually doesn't work. Since 1991, several people who've tried it have died. Research shows that an overpass can act like a wind tunnel and actually make people more vulnerable.

Experts say the best thing to do if you're in a car when a tornado is approaching is to drive to a building. Fast-food restaurants are a good choice because they usually have a walk-in cooler that will work as a shelter.

Knowing how to drive away from a tornado can also save your life, Tanamachi says. The trick is to not try to outrun the twister, as many people do. Instead, pick an escape route that takes you 90 degrees from the storm's path, she says.

Drivers need to plan for the worst, Tanamachi says.

"If you find yourself in a vehicle and unable to escape from the tornado, abandon the vehicle and try to get into a nearby ditch or a culvert," she says. "Protect your head and face and don't look at the tornado as it goes by, because you may be impacted by debris."

For scientists like Tanamachi, these safety steps aren't just theoretical. After all, she and many other researchers live in Norman, which is in the area known as Tornado Alley.

Just a few days ago, Tanamachi was taking part in a workshop at the National Weather Center in Norman when there was an outbreak of tornadoes in the area.

"We all had to evacuate down into the tornado shelter for a while," she says.