Accessibility links
Search For Clues Only Deepens 'Old Leatherman' Mystery In the 1800s, a man wearing a head-to-toe leather suit walked a 365-mile circuit between the Connecticut and Hudson rivers, sleeping in cave shelters and completing the journey precisely every 34 days. The legend of the Old Leatherman is still a mystery that fascinates people.

In the 1800s, a man wearing a head-to-toe leather suit walked a 365-mile circuit between the Connecticut and Hudson rivers, sleeping in cave shelters and completing his journey in precisely 34 days. And he kept it up for years.

No one knows who he was or why he did what he did, but the legend of the Old Leatherman still fascinates. This week, archaeologists and historians set out to solve the mystery by exhuming his body. But their efforts have only deepened the mystery.

In the woods off an old dirt road in Ossining, N.Y., a large rock face looms, with some smaller jagged boulders at its base.

"Here we are. This is actually where the Leatherman stayed," says author Dan DeLuca, who wrote a book about the iconic traveler.

DeLuca climbs down into what looks more like a crevice than a cave. More than 100 years ago, this spot was one of the homes of the Old Leatherman.

"He was all dressed in leather," DeLuca says, "made from old boot tops that he sewed together with leather lace."

That "boot suit" weighed 60 pounds, and he wore it even in the hottest days of summer. The Leatherman started walking clockwise in a huge circle between the Connecticut and Hudson rivers. And he completed that circuit every 34 days.

The Old Leatherman was so punctual that people could tell the time by his schedule.

The Leatherman slept in caves and other shelters, where he tended gardens and stored food. He walked through more than 40 towns on his route. But he didn't speak much — just the occasional grunt of some fractured English, and sometimes a phrase in French, believed to be his native language. 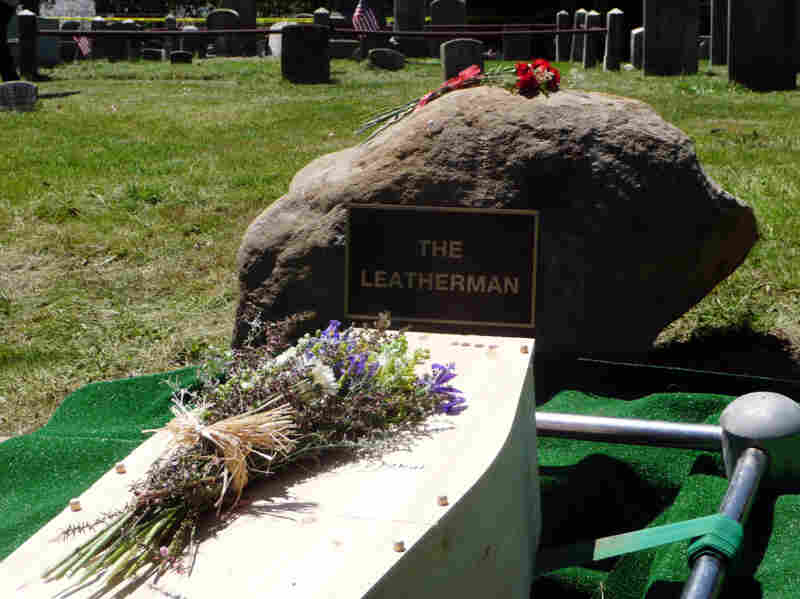 A new grave marker for the Leatherman was placed in a cemetery in Ossining, N.Y., this week. Craig LeMoult/WSHU hide caption

People began offering the Leatherman food, considering it an honor if he stopped at their home. Some schools let the best student go outside to give him food when he passed by on "Leatherman Day."

But no one ever knew who he was, or why he lived like this. It's a mystery that DeLuca has been studying for more than 20 years. He started his research after a heart transplant forced him to retire.

"A lot of people, when they get a heart transplant, don't make it. They pass away," he says. "And I think the old Leatherman has kept me alive."

DeLuca is not the only one inspired by the legend. The band Pearl Jam recorded a song about him. And there's a race in Pound Ridge, N.Y., named after him.

His caves are visited by Leatherman enthusiasts, as is his grave, in Ossining, N.Y.

A plaque on the headstone has the name "Jules Bourglay." There was a legend that a Frenchman by that name lost the chance to marry his true love after he blew a fortune in the leather business, and wandered Connecticut and New York in a leather suit as a penance. Of course, DeLuca looked into that one.

Seeing A Chance For Answers

The grave site is situated right next to a highway; so many people visit it that concerns arose that someone could get hurt. So the local historical society decided to dig up the Old Leatherman.

The plan was to move him to a more central place in the graveyard, and give him a new stone without the false name.

The historians thought that while they were at it, they could also take the opportunity to do forensic tests on the remains, to check some of the theories about the Leatherman. For instance, tests might help determine whether he had Native American roots. And it's not known whether he was from France or America.

The plan to take the DNA became a bit of a controversy. Don Johnson is a middle school history teacher in North Haven, Conn., who teaches his students about the Leatherman. He is also the creator of the website Leave the Leatherman Alone.

Johnson says the Leatherman was intensely private, spending "30 years, 100,000 miles, never telling anybody who he was. That legacy to me should speak to us today as, do we want to respect him and memorialize him properly? Then leave him alone. Leave his bones alone."

Despite those misgivings, archaeologists, soil scientists and amateur historians filled a tent erected over the grave site this week.

As they dug, the scene was one of excitement — somewhere between a scene from the TV show CSI and a circus tent.

Connecticut state archaeologist Nick Bellantoni lay on the gravesite, carefully scraping at it with a small tool. He found some nails, and a few animal bones. But that's it — there was no trace of the Leatherman.

They held a funeral for the Old Leatherman on Wednesday afternoon and reburied some of the dirt where they believe he decomposed. The Old Leatherman died more than 120 years ago, but the mystery surrounding his legend is now stronger than ever.