Accessibility links
Mladic Arrest Removes 'Stain' From Serbia The former Bosnian Serb general is suspected of leading the slaughter of some 8,000 Muslim men and boys during Bosnia's civil war in the 1990s. Ratko Mladic had been on the run since 1995, when he was indicted by a U.N. tribunal on charges of genocide and other crimes. 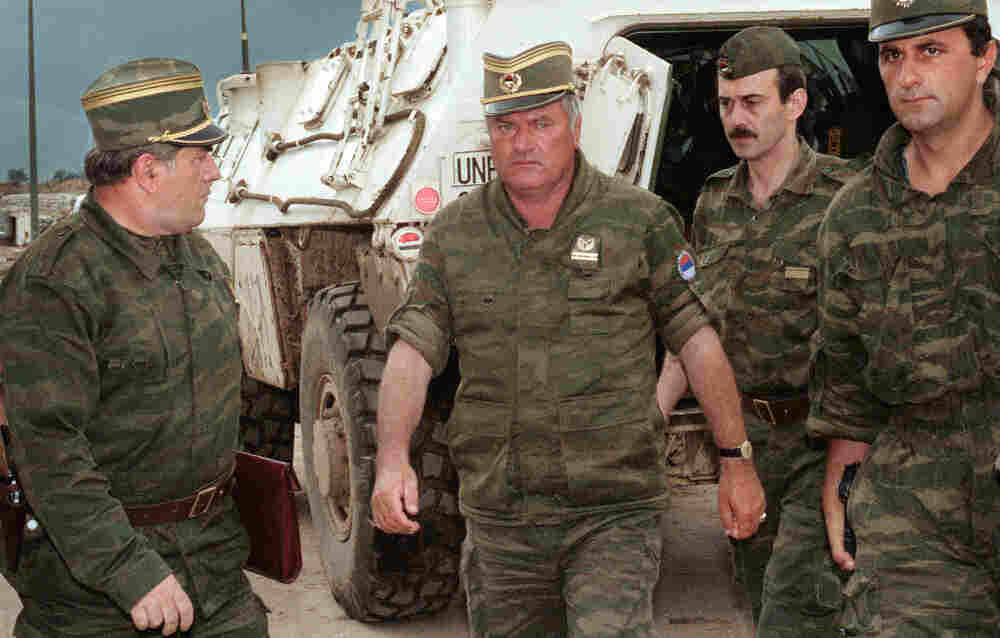 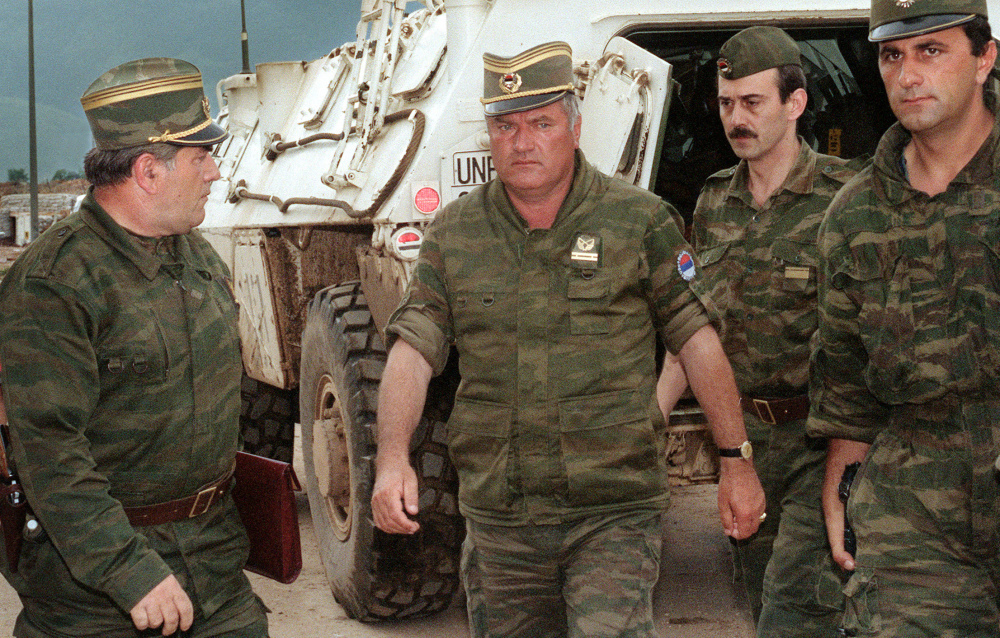 One of the world's most wanted war crimes suspects, Ratko Mladic, was apprehended early Thursday in Serbia after 16 years on the lam.

The brutal former Bosnian Serb general suspected of leading the slaughter of some 8,000 Muslim men and boys had been in hiding since he was indicted by the U.N. war crimes tribunal for genocide and other crimes committed by his troops during Bosnia's civil war in the 1990s.

Mladic, 69, appeared Thursday evening at a closed session in a Belgrade court, looking frail and walking very slowly as he was escorted by four guards. His lawyer, Milos Saljic, said the judge cut short questioning Mladic because of his "poor physical state."

"He is aware that he is under arrest, he knows where he is, and he said he does not recognize The Hague tribunal," Saljic said, adding that Mladic needs medical care and "should not be moved in such a state." Belgrade B-92 radio said one of Mladic's arms was paralyzed — probably the result of a stroke.

Deputy war crimes prosecutor Bruno Vekaric said that Mladic is taking a lot of medicine but "responds very rationally to everything that is going on."

The Serbian Security Intelligence Agency arrested Mladic, who was reportedly living under someone else's identity, early Thursday in a northern province.

"We ended a difficult period of our history and removed the stain from the face of the members of our nation wherever they live," Serbian President Boris Tadic told reporters as he announced the arrest.

Tadic said DNA testing confirmed Mladic's identity and that the former fugitive would be extradited for trial before the U.N. tribunal in The Hague, Netherlands. Extradition proceedings could take a week or more before Mladic's expected transfer to The Hague, where he faces life imprisonment. The U.N. court has no death penalty.

Serbian authorities had been under growing international pressure to hunt Mladic down. The country's aspirations of joining the European Union had been hindered by its failure to bring him in, but an EU spokeswoman said the arrest shows Serbia wants "to move further on its European path."

In the U.S., President Obama welcomed the news of Mladic's capture.

"Today is an important day for the families of Mladic's many victims, for Serbia, for Bosnia, for the United States, and for international justice," Obama said in a statement. "While we will never be able to bring back those who were murdered, Mladic will now have to answer to his victims, and the world, in a court of law."

U.N. prosecutors have said they believed Mladic was hiding in Serbia under the protection of hard-liners who consider him a hero for his role in Bosnia's 1992-95 ethnic war.

Mladic had two pistols when he was arrested but offered no resistance, and he appeared shrunken, bald and pale, Serbian officials and media said. A Bosnian radio station said he was not in disguise — unlike wartime Bosnian Serb President Radovan Karadzic, who was arrested in Belgrade in 2008 posing as a New Age guru, with long white hair and a beard.

While Karadzic's arrest didn't produce much of a reaction, Mladic is far more popular among die-hard nationalists in Serbia, according to NPR's Sylvia Poggioli. Because of that, she said, authorities will "probably try to get him to The Hague as fast as possible."

Villagers told The Associated Press that Thursday's arrest by Serbian security officers appeared to be swift and quiet.

"They didn't even wake us up," said a man who identified himself only as Zoran. "We learned about the arrest only in the morning."

Mladic led the Bosnian Serb army throughout the war and stands accused of orchestrating the worst atrocity in Europe since World War II: the massacre at Srebrenica.

Srebrenica was a Muslim enclave in eastern Bosnia that was entirely surrounded by territory held by the Bosnian Serbs. It was besieged for years, designated by the United Nations as a safe area, and more or less guarded by Dutch peacekeepers.

In July 1995, at Mladic's direction, the Serbs moved into Srebrenica and took it over with almost no resistance from the U.N. peacekeepers there. The Muslim population took shelter at the peacekeepers' base.

"Gen. Mladic, who presided over this operation, personally assured the U.N. officers that people there would be safe," NPR's Tom Gjelten, who has written a book about the Bosnian conflict, told All Things Considered. "But then he ordered the men and boys taken away in buses and, according to witnesses and forensic evidence, he had them systematically shot — about 8,000 Muslim men and boys, lined up with their hands tied behind their backs and executed. They were then dumped in mass graves."

"There are pictures of him, horrible, chilling pictures of him caressing the face of a little frightened boy, promising nothing will happen as he sent all the women and children away in buses," she said from Madrid. "And then the TV cameras disappeared and then the massacre happened over the next few days."

Srebrenica has become nearly synonymous with the horrible bloodshed of the Balkan conflicts.

Evidence that has been presented in other trials before the international war crimes tribunal at The Hague points the finger at Mladic as the architect of that massacre, Poggioli said.

Munira Subasic, the head of a group of victims' family members formed to keep the pressure on war crimes investigators, welcomed the news of Thursday's arrest. But she added, "I'm sorry for all the victims who are dead and cannot see this day."

Mladic's ruthlessness was legendary: "Burn their brains!" he once bellowed as his men pounded the Bosnian capital, Sarajevo, with artillery fire.

So was his arrogance: He nicknamed himself "God" and kept goats that he was said to have named after Western leaders he despised.

Among his men, Mladic commanded fierce devotion — many Bosnian Serb soldiers pledged to follow him to the death — and adoration bordering on the pathological.

As military leaderships go, his was omnipresent, from front-line trenches to chess games on high-altitude outlooks. He was known for ordering push-ups as a prelude to battle, and he enjoyed reviewing military parades and rubbing shoulders with U.N. commanders in Bosnia.

Obsessed with his nation's history, Mladic saw Bosnia's war — which killed more than 100,000 people and displaced an additional 1.8 million — as a chance for revenge against 500 years of Turkish-Ottoman occupation of Serbia. He viewed Bosnian Muslims as Turks and called them that as an insult.

"One of the things about the Serb passions that drove their aggression against the Bosnian Muslims was their deep sense of historical grievance, absurdly deep it could even be said," Gjelten said. "For many Serb nationalists, the Bosnian Muslims had it coming to them because of what their ancestors had done to Serbs 200 or more years earlier during the period of Turkish rule. And Ratko Mladic was especially adept at linking the war to those Serb struggles of the past."

Convinced of the power of his army, he was known for telling his soldiers: "When I give you guarantees, it's as if they are given by God."

Once, asking air traffic control to clear the way for his helicopter to land, he declared: "Here speaks Ratko Mladic the Serbian God."

Mladic was indicted by the U.N. tribunal along with Karadzic for genocide linked to the Srebrenica massacre, as well as numerous counts of crimes against humanity. The allegations include the taking of peacekeepers as hostages, the destruction of sacred places, the torture of captured civilians and the wanton destruction of private property.

During the shelling of Sarajevo, Mladic was said to have commanded: "Scorch and destroy!" He denied ever giving such an order.

The U.S. government offered $5 million for information leading to his arrest or conviction in any country.

With his wife, Bosa, Mladic settled down to imposed domesticity, passing the time caring for bees and goats. His 23 goats reputedly bore the names of foreign dignitaries he despised, such as Madeleine Albright, the former U.S. secretary of state.

Surrounded by security guards, he occasionally ventured out of the dense pine forest to mark events such as the anniversary of the Bosnian Serb army and St. Vitus Day, a religious festival marking the 1389 Serb defeat by the Turks at Kosovo.

When in the late 1990s his trail grew too hot in Bosnia, Mladic moved with family into a posh suburban villa in the Yugoslav capital, Belgrade.

In Belgrade, he was seen attending his son's wedding. He showed up at soccer games, dined in plush restaurants and frequented elite cafes, refusing to give interviews and smiling quizzically when he happened to be photographed.

When Milosevic was ousted from power in October 2000, and Yugoslavia's new pro-democracy authorities signaled they might hand Mladic over to the tribunal, tabloids had him leaving Belgrade for Bosnia.

But true to his style, Mladic countered those rumors and others that had him terminally ill in Belgrade. Before going underground in 2002, he was repeatedly seen in public — sometimes with his guards, sometimes without them.