Accessibility links
Brilliance In The Shadows: Mercadante's 'Virginia' Once a huge hit in Italy, this opera by the nearly forgotten Saverio Mercadante has long languished. But it's full of great music — and ancient Roman intrigues.

Hear An Introduction To 'Virginia'

Brilliance In The Shadows: Mercadante's 'Virginia'

From The Wexford Opera Festival

Hear An Introduction To 'Virginia' 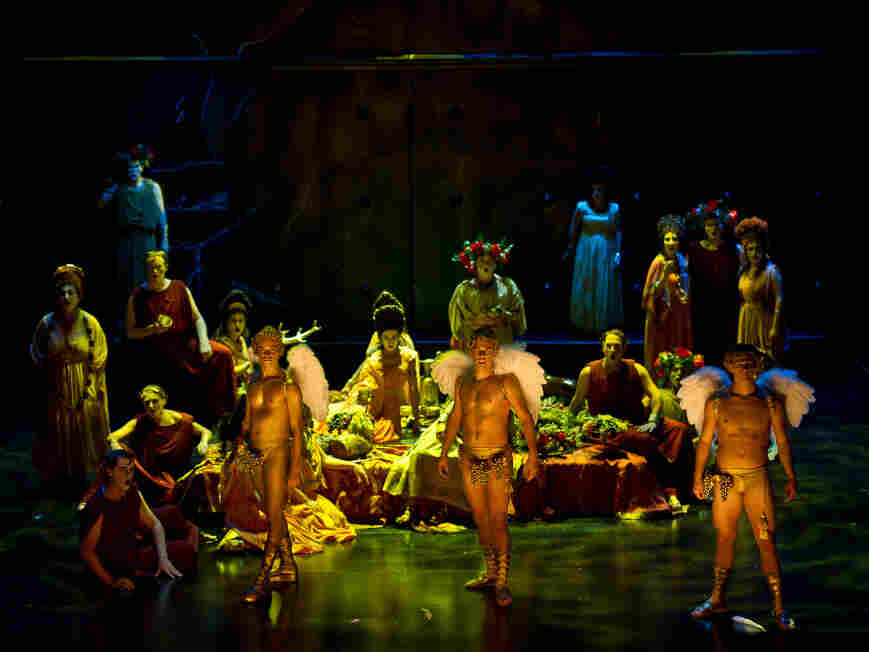 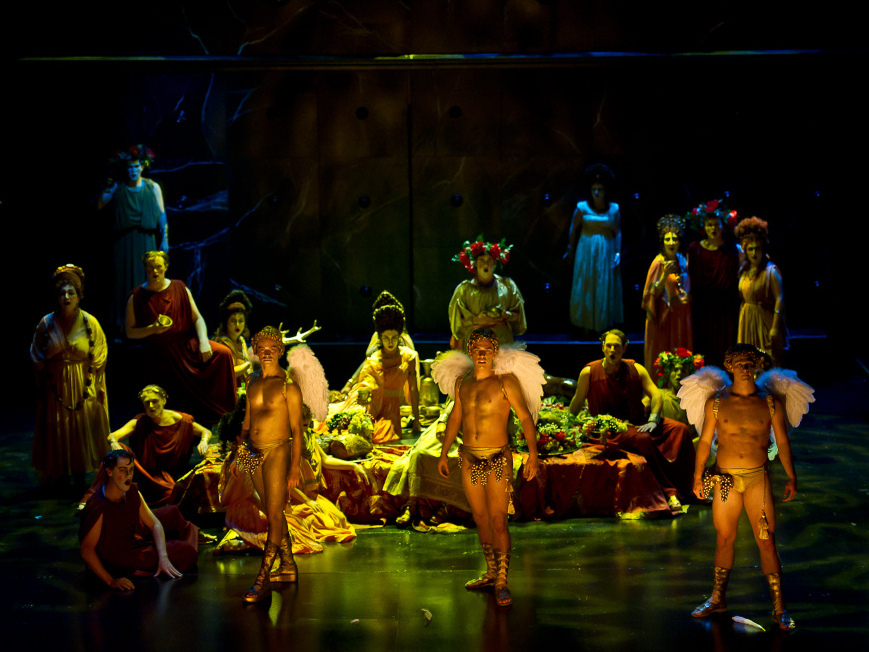 Do you know the British rock band Herman's Hermits, from the 1960s? If not, that's entirely understandable; their heyday was brief, to say the least. You might say Herman's Hermits became to 1960s' British rock what Saverio Mercadante was to 19th-century Italian opera.

During one year, 1965, the Hermits had two singles top the Billboard charts in the U.S. — "Mrs. Brown, You've Got a Lovely Daughter" and "I'm Henry VIII, I Am." But that wasn't enough to keep them going for long.

The year before, The Beatles had released "I Want to Hold Your Hand." Then, just as the Hermits were making their mark, another British band had its first number one hit in America: The Rolling Stones, with "(I Can't Get No) Satisfaction." In the shadow of The Beatles and The Stones, Herman's Hermits didn't have much of a chance. And that's pretty much what happened to Mercadante in Italy in the 1800s.

Act One ends with an unusual trio for two tenors and soprano, after Icilio (Bruno Ribeira) arrives unexpectedly as Appio (Ivan Magri) is trying to seduce Virginia (Angela Meade). During the confrontation, Virginia says she'll die before giving in to Appio, and Icilio shares that sentiment. He begins their furious trio with the words "Calcando il mio cadavare" — "Over my dead body."

In Act Three, Virginia and her father Virginio (baritone Hugh Russell) are about to leave for the forum, knowing that Appio is sure to rule against them. After a quiet introduction for solo English horn and harp, Virginia opens an emotional duet by singing "Sacre Penati," an appeal to the gods of the Roman house and home.

Mercadante began his career early in the 1820s, and over the next 25 years he wrote nearly 60 operas. But even at the height of his popularity, he was filling a sort of gap. Gioachino Rossini left Italy for Paris in 1823. Gaetano Donizetti followed suit in the 1830s, and for a short time Mercadante dominated the Italian opera scene. Then Giuseppe Verdi came along: as the 1840s progressed, Verdi became more and more prominent, and Mercadante's time seemed to have come and gone. Not surprisingly, given strength of his competition, his operas remain obscure today.

Still, Mercadante's works do hit the stage from time to time, and when that happens it's easy to see why he was once the top dog of Italian opera. In the best of his work, Mercadante's music is rooted in the fluid lyricism of bel canto, reminiscent of Rossini and Bellini. At the same time, it anticipates the game-changing innovations that made Verdi's best operas some of the greatest ever composed.

But the story also involves a nasty Roman ruler who's overthrown by his people — and Mercadante composed the opera in Naples, where the conservative ruling class was barely clinging to power. The Neapolitan censors took one look at the libretto and promptly banned it.

That was in 1851, and the score sat on a shelf until it was finally performed in 1866. The premiere took place at Naples' most famous opera house, the Teatro San Carlo, where it was one of the biggest hits on record. In a moving moment, Mercadante, by then old and blind, was cheered and applauded through dozens of curtain calls.

On World of Opera, host Lisa Simeone presents a new production of Mercadante's Virginia from the Wexford Opera Festival in Ireland. Tenors Bruno Ribeira and Ivan Magri play the drama's two main rivals; they're vying for the attention of the opera's title character, sung in an exciting performance by the young American soprano Angela Meade.

The Story Of 'Virginia' 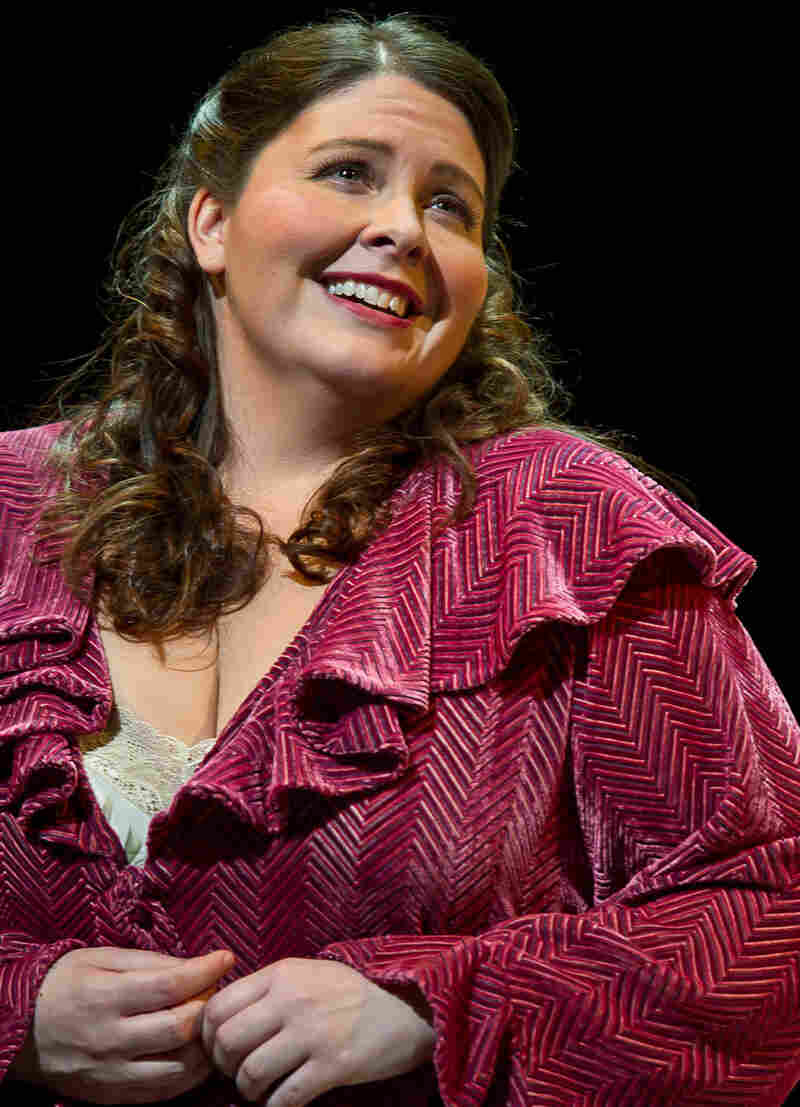 Mercadante's opera has three acts, all set in Rome in the 5th century BC. It takes place at a time of bitter conflict between the plebeians and the ruling patricians, who dominate the city through the powerful Council of Ten.

The council's leader is a man called Appio, and as ACT ONE opens he's attending a lavish party at the council palace. Appio disapproves of the all the drinking and carousing, yet he has a secret weakness of his own. To consolidate patrician power, he has banned all marriages between patricians and plebeians. But he himself has fallen in love with a plebeian woman, Virginia.

Appio has sent his henchman Marco to visit Virginia with a mission to convince her of Appio's love. But Marco reports back that Virginia wants nothing to do with Appio.

The scene changes to Virginia's home. She's the daughter of a soldier called Virginio, who is off at war, and she's mourning her mother, who has recently died. Virginia's ladies try to cheer her up by reminding her of the man she loves, the plebeian leader Icilio. That lifts her spirits, but only briefly. She's afraid of Appio, and sends her nurse Tullia off to find a sympathetic cousin, Valerio. She's hoping he might contact her father, tell him what's going on, and urge him to return from the battlefront.

Appio then makes an unexpected appearance, and he tries to seduce Virginia in person. She rejects him so firmly that Appio decides she must already have a lover, and demands to know who it is. He gets his answer when Icilio shows up. The act ends with a dramatic trio. Appio and Icilio confront each other, while Virginia demands that Appio leave her home and never return.

As ACT TWO begins, Virginio has returned briefly from battle. Virginia tells him what's been going on, and pleads for his help. Virginio doesn't have much time, as he needs to get back to his command the very next day. He proposes a quick fix: to prevent Appio from getting his way, Virginio arranges for his daughter to marry Icilio immediately.

But it won't be that easy. The second scene takes place at a public square, outside a temple where the wedding will take place. As the ceremony is set to begin, Appio and Marco arrive — and Marco makes a shocking announcement. He declares that Virginia is not who everyone thinks she is. Marco says she was actually born to one of his slaves, then stolen as an infant, and sold to Virginio and his wife. So Virginia, he says, belongs to him, and can't marry Icilio.

The claim sounds outlandish. Virginio denies it, while Icilio denounces Marco as a liar, calling him the evil servant of an evil man. The plebeian crowd gathered for the wedding seems on the verge of a riot.

Appio serves as both leader of the patrician council and as chief magistrate. He says he'll consider the issue and deliver an official ruling the next day. Meanwhile, Marco says Virginia should spend the night under his protection, while her father wants to take her home. An argument erupts, and there's a violent confrontation between patricians and plebeians as the act ends.

ACT THREE begins in Appio's palace rooms. Marco is there, and they've summoned Icilio to join them. When he arrives, they offer him a plum position in the military. It's a big promotion, but if Icilio accepts, he'll have to leave Rome and join the legions. Naturally, Icilio knows exactly what's going on, and refuses. He says that in the morning, he'll be in the forum with everyone else, waiting for Appio's judgment. As he leaves, Appio turns aside and says that if Icilio is still in Rome the next day, he'll be a corpse.

Scene Two is set in Virginia's house the following morning. She and Virginio are about to leave for the forum when their cousin Valerio arrives with grim news. Icilio has been found murdered, and they all know that Appio is responsible.

In the final scene, everyone has gathered at the forum, where Appio announces his ruling. To nobody's surprise, he sides with Marco, saying that Virginia was born as of Marco's slaves, and must return to him.

When Virginia says she'd rather die than submit to Marco and Appio, her father begs for one last chance to embrace her, before she's taken away. Appio agrees. But as Virginio approaches his daughter he quickly draws a dagger, and stabs her to death, denying Appio his final victory.

When the onlookers see this, they cry out that Virginio must surely have been Virginia's true father. They also demand Appio's death. The crowd surges forward, and Appio and his men are overwhelmed as the opera ends.