Accessibility links
In Pakistan, Doubts Persist Bin Laden Is Dead A recent poll found 49 percent of Pakistanis do not believe the al-Qaida chief was killed in the way the U.S. says. The country embraces conspiracy theories – though in all fairness, that could make sense in a place where so many killings go unresolved, and many conspiracy theories turn out to be true. 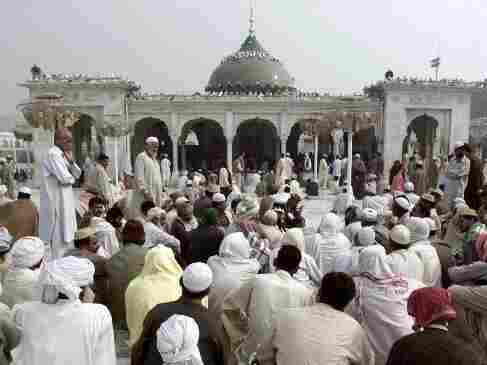 We're on a crowded shopping street in Lahore, Pakistan, alongside the shrine to Data Ganj Baksh, one of the holiest places in the country. The shrine of a Muslim saint, it's a giant rectangle surrounded on all sides by giant white stone arches. This location was bombed last year. So we thought Thursday night, a very busy night at the shrine, would be a good night to ask people about what's happening in Pakistan.

In recent days, there has been bombing after bombing across the country, even an attack on a naval base — all apparently in retaliation for the killing of Osama bin Laden.

Zafar Iqbal says he's heard of the latest attacks. He says they're wrecking the economy and the country's defense system.

"Only God can save us," he says in Urdu, "our government can't."

Iqbal, a teacher at a religious school, says he doesn't often talk about current events in class "because the bad news is too stressful for the students."

But when asked what positive things he talks about, he laughs, saying: "I don't discuss because we don't have many positive thing."

And there is one piece of news that he really doesn't believe: It's "doubtful," he says, that al-Qaida leader Osama bin Laden was really killed by U.S. Navy Seals this month.

Nor is Iqbal the only person here who doubts it.

"I don't believe he could be killed by those dogs," Malik Shabir says in Urdu, referring to Americans.

A recent Gallup poll of Pakistanis found that 49 percent do not believe bin Laden was killed in the way the U.S. says. This country embraces conspiracy theories — though in all fairness, that could make sense in a country where so many killings go unresolved, and many conspiracy theories turn out to be true.

Lahore is the city where an American named Raymond Davis was arrested this year for killing two Pakistanis. The U.S. eventually admitted he was a CIA contractor. When I visited the Data Ganj Baksh shrine in Lahore on Thursday night, I had trouble getting in with a tape recorder. I'm obviously American, and the guards kept mentioning Davis, as if they suspected me of being a spy.

All this year's events feed into a political culture that runs on conspiracy theories and skepticism.

She's in a coffee shop called Calories with her friend Alina Pasha in another part of the city.

Pasha works in a bank while Agha is studying for a master's degree in business.

"If there was an Osama bin Laden at that location ... at that time ... if he was present over there, there is a proper way to go about it," Agha says.

When asked if her choice of words means she isn't sure the al-Qaida chief was where the U.S. said he was, she replies: "Of course not. If he was there, you guys would've been there a lot sooner."

To be clear, Agha is no Islamist — nor is she anti-American. In fact, she hopes to study in the U.S. someday.

"I am not somebody who is against America or against any nation. I'm not into this. I'm not at all into this," she says. "What I want is that I can actually, you know, enjoy life, live happily ... not be afraid about getting killed the moment I get out of my house."

After their meetings, U.S. and Pakistani officials may well spend the coming days making public statements to smooth over their troubled relationship. Whatever they say, we can feel certain many Pakistanis won't believe a word.