Accessibility links
Report: Air France Plane Stalled Before Plunge Investigators in France say "black box" recordings show the pilot of the Paris-bound Air France plane that plummeted into the Atlantic nearly two years ago was not at the controls when the jet first encountered trouble. All 228 people onboard were killed. 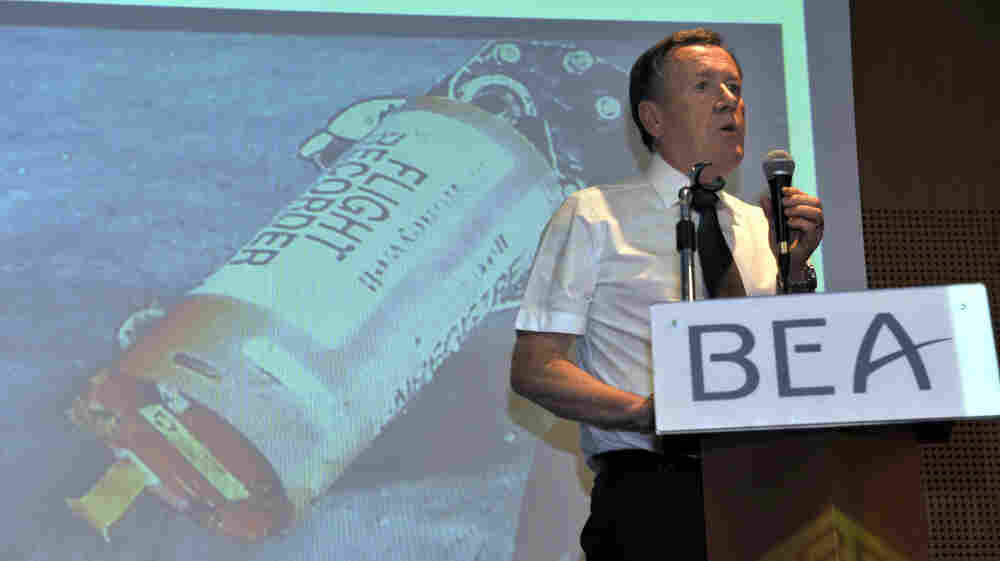 Alain Bouillard of France's air incident investigation bureau held a news conference on May 12 near Paris. On Friday, the agency, known as the BEA, released its first formal statement on the crash of Air France 447. Mehdi Fedouach/AFP/Getty Images hide caption 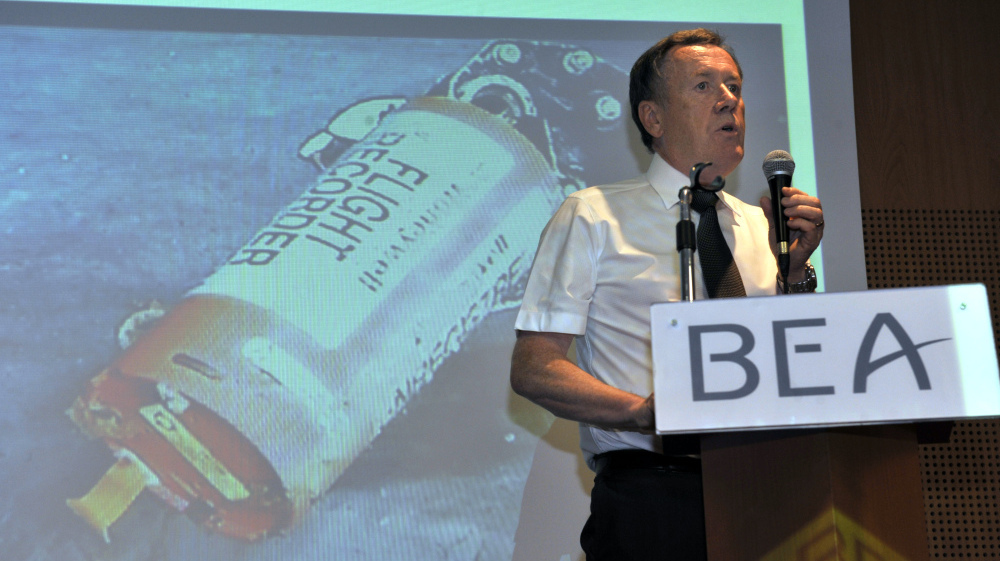 Alain Bouillard of France's air incident investigation bureau held a news conference on May 12 near Paris. On Friday, the agency, known as the BEA, released its first formal statement on the crash of Air France 447.

Two co-pilots facing faulty instrument readings and a stall fought to retain control of an Air France flight before it slammed into the Atlantic, according to the first formal report from France's air accident investigation bureau.

The flight recorders, recovered from the crash in 2009, show that the captain was out of the cockpit for a routine rest period when the jetliner started to descend at a sharp angle from 38,000 feet. All 228 people aboard were killed.

"At the time of the event, the two co-pilots were seated in the cockpit and the captain was resting," read the report, which was released Friday.

Co-pilot Pierre-Cedric Bonin, 32, was at the controls as the plane went down and was sitting to the right of a second co-pilot, David Robert, 37. Pilots on long-haul flights often take turns at the controls to remain alert.

Capt. Marc Dubois returned to the cockpit about a minute and a half after the autopilot disengaged at 2:10 a.m. and five seconds Coordinated Universal Time, which is equivalent to but more precise than GMT.

He did not take back the controls, and the two co-pilots tried without success to bring Flight 447 out of a stall and stop it from plummeting into the ocean.

The "black box" recordings stopped at 2:14 a.m. and 28 seconds — just under 8 1/2 minutes after the co-pilot at the controls advised the cabin crew that "you should watch out" for turbulence ahead.

But turbulence was not excessive as the plane, which had stalled three times, tried to negotiate a normal path passing through a heavy layer of clouds.

The highly technical report did not analyze the data or cockpit conversations or assign blame. It also did not, for instance, suggest whether the plane's Pitot tubes — speed sensors that investigators have said most likely played a role — were the main cause or whether Dubois' temporary absence from the cockpit had any affect on the quickly unfolding events.

The last recorded measurement showed the plane plummeting at a rate of 10,912 feet per minute (124 mph). The flight recorders were found last month along with bodies in the latest search of the ocean depths. So far, searchers have not found the plane's Pitot tubes.

"It would seem to me, reading between the lines, that the cockpit crew weren't confident of the information that was being presented to them on the data displays. Maybe — and it's only a maybe — they took some action that led to the stall warning, and the plane stalling and then being unable to correct it."

A full report on the crash is not due until next year.

Frank Browning and NPR's Eleanor Beardsley contributed to this report, which contains material from The Associated Press

A previous version of this story incorrectly said that Flight 447 was Brazil-bound. In fact, the plane had taken off from Brazil and was headed to Paris.