Accessibility links
A Last Gift: Father Finishes Book After Son's Death It's been more than four years since Army Staff Sgt. Darrell Griffin Jr. was killed while serving in Iraq. When he died, he had been collaborating with his father on a book about the war. The book — Last Journey, A Father and Son in Wartime — is a compilation of hundreds of emails and letters — and Darrell Jr.'s journal. 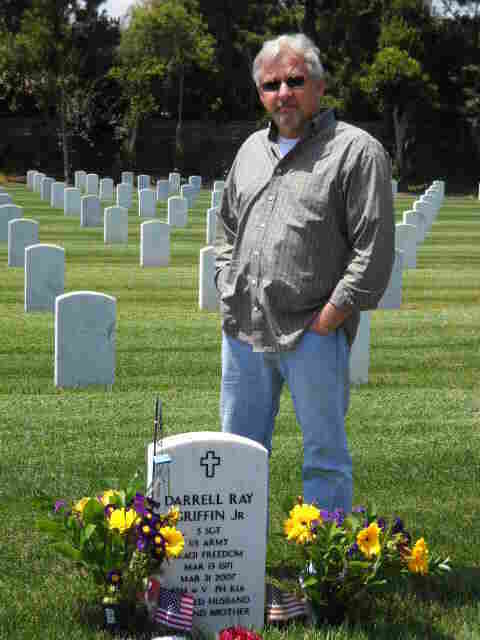 Darrell Griffin Sr. visits his son grave twice a month. The ritual is always the same: He lights two sticks of his son's favorite incense and adds a fresh bouquet of sunflowers. Gloria Hillard hide caption

It's been more than four years since Army Staff Sgt. Darrell Griffin Jr. was killed while serving in Iraq. When he died, he had been collaborating with his father on a book about the war.

Standing next to his son's grave, Darrell Griffin Sr. translates the abbreviated carvings of the headstone. Etched in the white marble, they remind you of an ancient language. First are the letters B-S-M-V.

"What that stands for is bronze star medal with valor," he says. "And PH is Purple Heart, KIA is killed in action."

He used to visit every Sunday. Now he comes here at least twice a month. The ritual is always the same: He lights two sticks of his son's favorite incense. The small chimes he brought here years ago dance in the breeze above a new bouquet of sunflowers.

Military grave markers only allow a few words — most begin with the word "Beloved." This one reads: "Husband, son and brother." But the father realized he had more to say.

Back home, the walls of Griffin's office are lined with books. But the one he is holding in his hands is his most cherished. He flips through the pages. 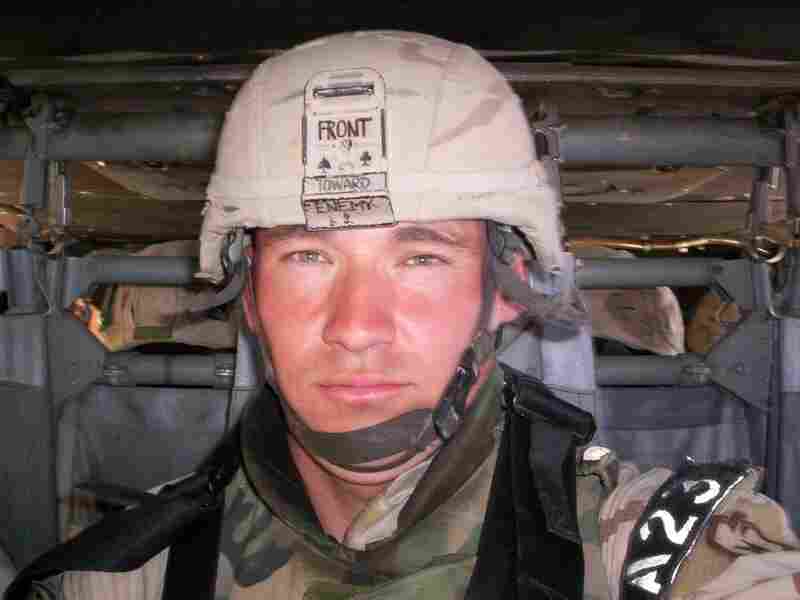 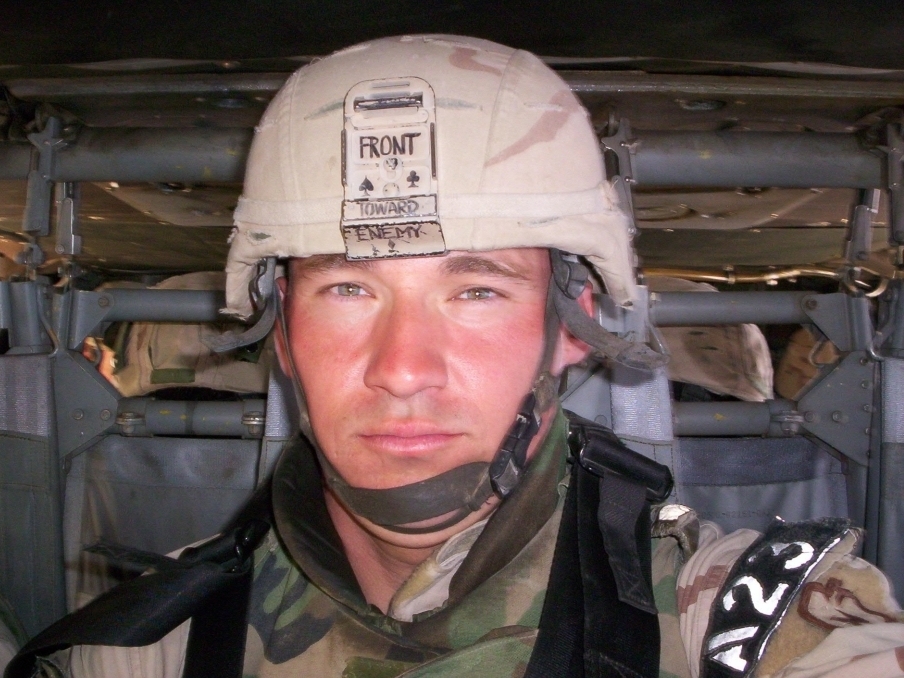 Army Staff Sgt. Darrell Griffin Jr. was killed in March 2007 in Iraq by a sniper.

"Once when he was real little, he said, 'Dad, did I have to take your name because we couldn't afford another one?' And I always remember that," Griffin says.

The book is titled Last Journey, A Father and Son in Wartime. It is a compilation of hundreds of emails, letters — and his son's journal.

"This is where he started his journal: 'I am attempting to create an account of two tours of combat in Iraq as an infantryman. I'm trying to make sense of a world that I'd never known until the first time I had to kill a man.'"

Griffin says he knew when his son was frightened because he would sign his emails with Skip or Skipper, his childhood nickname. "Dear Mom and Dad, I'm convoying within hours and just ask that you pray for me and believe for me because I can't right now ... I will email you as soon as I get there, Skipper."

Their last conversation was on his son's 36th birthday.

"He said, 'Dad I'm just tired. I just want to come home.' And he never talked like that to us before," Griffin says.

A week later, a sniper's bullet killed Darrell Griffin Jr. Overcome with grief, his father knew he had to complete the book they had started together — inspired by their conversations; musings and questions about God — and shaped by war. But first, there was something else he had to do. 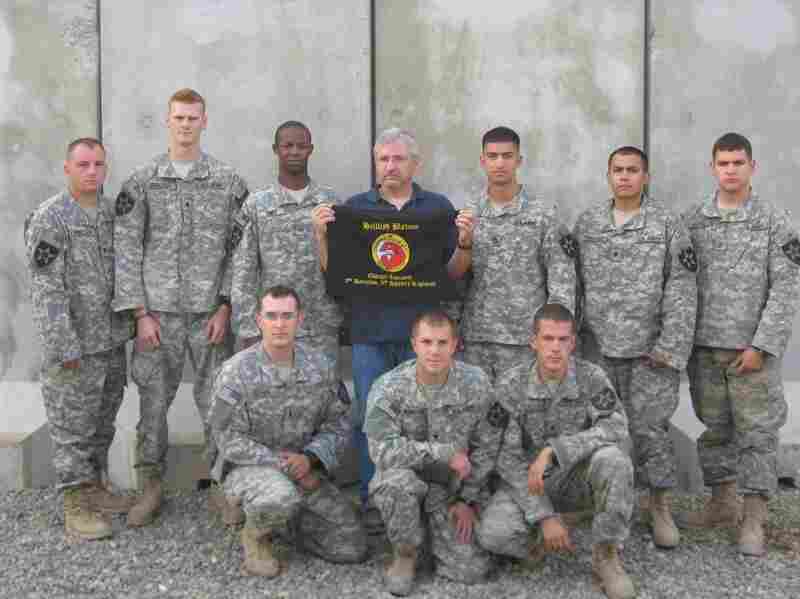 After his son died, Griffin traveled to Baghdad and then by Black Hawk helicopter to Camp Striker where his son's unit was located. Courtesy of Darrell Griffin Sr. hide caption 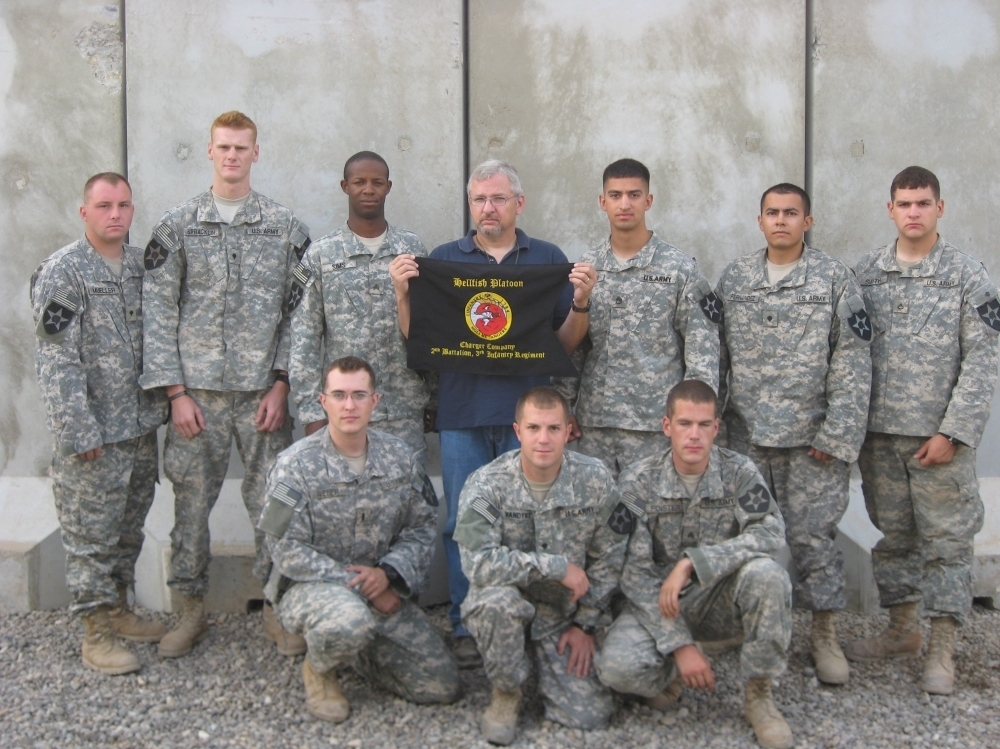 After his son died, Griffin traveled to Baghdad and then by Black Hawk helicopter to Camp Striker where his son's unit was located.

"Nobody believed I could go to Iraq because they don't allow parents to go the war zone," Griffin says.

With the help of his congressman and Gen. David Petraeus, Griffin traveled to Baghdad, then by Black Hawk helicopter to Camp Striker, where his son's unit was located.

One night, he couldn't sleep so he decided to take a walk and then he heard another set of boots on the ground.

"And it was my son," he says. "And it was absolutely unequivocally my son, not an image, not a dream. I was walking and there was my son. And in his normal vernacular, he said, 'Dad, what the F are you doing here?' He said, 'This is dangerous.' And before I could answer, he said, 'Don't worry about me, I'm in a good place.' And then he was gone."

Last Journey will always be the last gift to his son. Griffin picks up his copy.

"And I can see him smiling, knowing this is what he left me as his last gift," he says.

The gift of not only the worn book in his hands, but the courage to realize his long-held dream of being a writer. The 58-year-old former CPA is now working on his second book.