Accessibility links
Revved Up For The Indy 500 Every Year Since 1947 When the gentlemen (and women) start their engines for the 100th running of the Indianapolis 500 on Sunday, 82-year-old Robert Joss will be there, just as he has ever since Harry Truman was president. 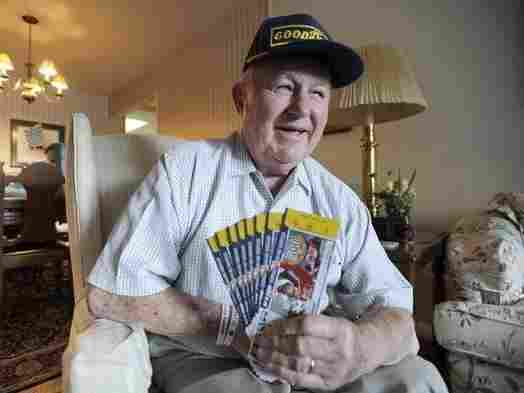 Robert Joss has his tickets ready for this year's Indy 500 — as he has every year since Harry Truman was president. Alan Petersime/The Indianapolis Star hide caption 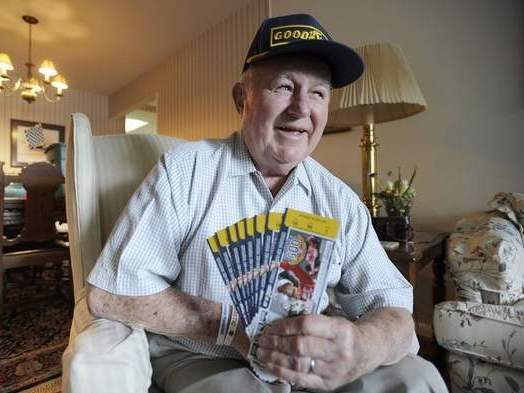 Robert Joss has his tickets ready for this year's Indy 500 — as he has every year since Harry Truman was president.

The Indianapolis 500, billed as the "greatest spectacle in racing," celebrates its 100th birthday on Sunday.

Joss, who lives in Indianapolis, got his first ticket from his Uncle Floyd back when Harry Truman was president. Fresh out of Howe Military School, Joss says, he wasn't particularly fresh that first race day.

"In those days they used castor oil in the engines, and, boy, you could smell it," Joss tells NPR's Rachel Martin. He was only about 20 feet from the track during that race. "After about two laps, you were saturated."

Even with that oily beginning, Joss was hooked.

His consecutive-race streak was only threatened a few times.

One year, he forgot his ticket and Uncle Floyd pulled a few strings to get him in. A few years later, Joss had to arrange his furlough from the Army around the race.

And 1973 brought an epic rain delay. Joss, who was a schoolteacher at the time, had to take off in the middle of a school day to attend the 500, while two colleagues covered his classes.

Perhaps the closet call came in 1960. His wife, Margaret, was pregnant. Her due date? Race day.

She tried to draw a line in the sand: If she hadn't given birth before the Indy 500, she said, he couldn't attend. 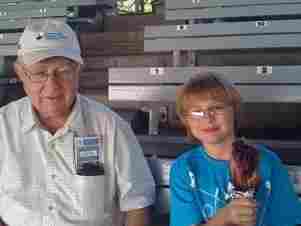 Robert Joss was introduced to the Indy 500 by his Uncle Floyd back in 1947. Last year, his companion was his grandson, Max Lyski (above), accompanied by the traditional turkey leg. Courtsey of Mary Lyski hide caption

Lucky for Joss (and Margaret), his daughter was born a week later.

"She could've hung it over my head for a long time," he says.

Bring On The Noise

After six-plus decades, you'd think the Indy 500 would start to become a blur. But Joss says he gets excited for it every year, especially in the first lap.

Before the start, he and his Uncle Floyd used to calm their nerves with "a good snort of whiskey before it started." Now, with his uncle long dead and his grandson as race-day companion, Joss has traded the bourbon for a few beers. He's a diabetic and has undergone open heart surgery.

"I have to kind of take care of myself," he says.

But his eardrums still get a workout. Joss has never worn earplugs to a race. After years of driving a semi-truck to supplement his teacher's income, he says, he's gotten used to noise.

Being the hard-core Indy fan he is, does he feel confident enough to bet on a winning driver?

"I'd rather bet on whether it'll rain in the next five minutes," he says with a laugh, "There's too many variables."

Even if he can't pick a winner, Joss seems content these days to eat turkey legs in the stands with his grandson. He hopes to get to few more races under his belt to make his record an even 70 years.