Accessibility links
The Fa-Word: An Insulting Slur In the Spotlight In April, basketball superstar Kobe Bryant of the Los Angeles Lakers was fined $100,000 by the NBA for calling a referee the Fa-word. In May, Joakim Noah of the Chicago Bulls was fined $50,000 by the league for hurling the anti-gay slur at a fan. Is the Fa-word the new N-word?

The Fa-Word: An Insulting Slur In the Spotlight

The Fa-Word: An Insulting Slur In the Spotlight 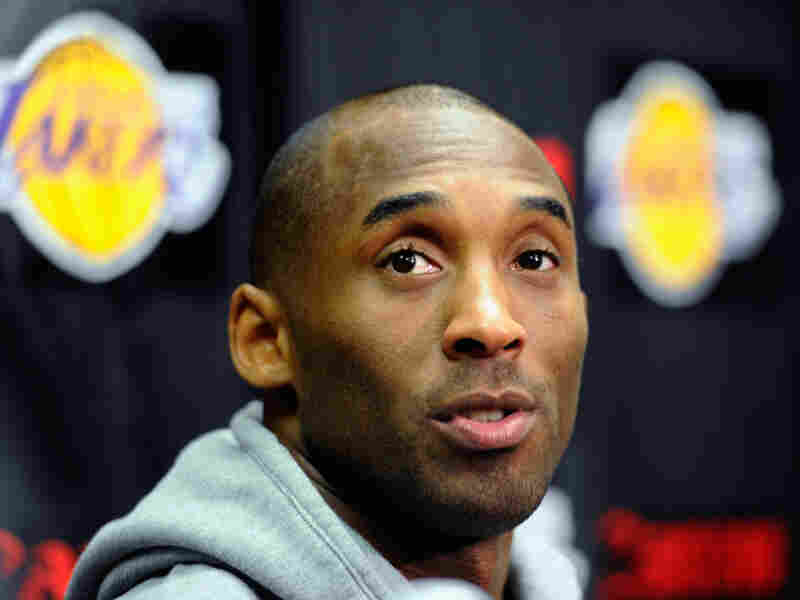 Los Angeles Laker Kobe Bryant (above) was recently fined $100,000 by the NBA for calling a referee the Fa-word. Joakim Noah of the Chicago Bulls was fined $50,000 by the league for saying it to a fan. Kevork Djansezian/Getty Images hide caption 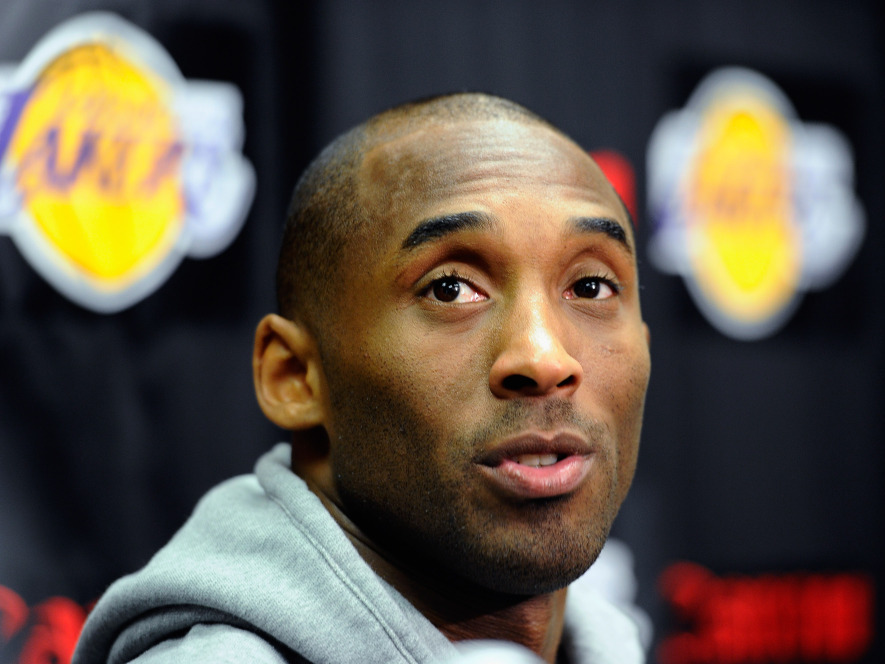 Los Angeles Laker Kobe Bryant (above) was recently fined $100,000 by the NBA for calling a referee the Fa-word. Joakim Noah of the Chicago Bulls was fined $50,000 by the league for saying it to a fan.

Is the Fa-word the new N-word?

What is the Fa-word, you ask? It's a six-letter, two-syllable term that starts with the letters fa and rhymes with maggot. It's not to be confused with the F-word.

In April, basketball superstar Kobe Bryant of the Los Angeles Lakers was fined $100,000 by the NBA for calling a referee the Fa-word. In May, Joakim Noah of the Chicago Bulls was fined $50,000 by the league for hurling the anti-gay slur at a fan.

These are just recent incidents in a tumultuous timeline that includes:

Sticks and stones may break one's bones, and words themselves may not hurt. But the Fa-word sure does seem to accompany some violent behavior. To many people, gay and straight, it has become another in a long line of unacceptable, unsavory and unnecessary epithets.

The word has a dark history. According to the Oxford English Dictionary, the morpheme comes from the French fagot, which means a small bundle of bound-together sticks to be used as kindling. And it was spelled with either one g or two up until the 1960s.

By the mid-16th century, the word had become associated with the burning alive of heretics and was used in callous phrases such as "fry a faggot." Faggot became a shorthand way to refer to a heretic. And by the 1800s, the term was also being used to refer derogatorily to women. The modern term may have come from these origins, but the etymology is in dispute.

The OED cites a 1914 reference in a book of criminal slang as the first modern American use of faggot as a slur for a homosexual male: "All the fagots (sissies) will be dressed in drag at the ball tonight." And from John Dos Passos in his 1937 novel Big Money: "The first thing Marge thought was how on earth she could ever have liked that fagot."

Usage of the word became more complex with the dawn of the gay-rights movement. In the late 1970s, Larry Kramer wrote a novel titled Faggots that attempted to neutralize it in a provocative way. In 1991, Dan Savage — who eventually would help create the "It Gets Better" project — started writing his "Savage Love" advice column. He had all his readers address him as "Hey, Faggot," at the beginning of their questions.

Today the term is listed in most every dictionary as derogatory or offensive.

"Yes," says Hank Stuever, a TV critic at The Washington Post. "The Fa-word is the equivalent of the N-word."

Just Beginning To Open Up

"I have been called a fag since about sixth grade," says Stuever. "I'm 42 now. Once in a while, I'll be walking down a street in Washington and from a passing car, filled with young men, someone will yell out 'fag.' ... I can be no more astonished about this than the woman who walks down the same street and gets cat-called by the same car. I brush it off immediately and sometimes laugh, but I do internalize it. It's a junior high feeling of terror."

Gay men haven't talked about that sinister sensation a lot, Stuever says, and they are just beginning to open up. He believes that the recent "It Gets Better" project — a viral video campaign and book aimed at protecting gay teenagers — has had widespread resonance "not because people are interested in banning a word, though I think some people think it's as simple as that. But because, at last, you can talk about having been called a faggot most of your life."

The Internet has given vent to people who spew forth harsh, hate-filled language. But it has also provided a forum for serious discussion of the causes and effects of weaponic words.

On Facebook, for instance, you can find the issue debated on a page titled: "What is your take on the word 'faggot'?"

Justin Braton, 21, a student and pizza maker in Moorhead, Minn., writes, "Personally, if someone called me a fag, it wouldn't have much of an effect on me. I just haven't been put in any situation where that word inspires such fear and disgust. However, that isn't to say it's OK. Obviously it's a word meant to hurt a minority, to which I... gayly belong."

Another Facebook habitue observes: "I consider it a strong insult if someone actually calls me a 'fag' or 'faggot.' And then if someone merely uses the word in my presence whether they know I am gay or not, I still consider it insulting."

'Context Is All Important'

Randall Kennedy, a professor at Harvard University's law school and author of Nigger: The Strange Career of a Troublesome Word, has given a lot of thought to hate language. "Faggot can be used as viciously or facetiously or ironically or tenderly as nigger," says Kennedy. "Obviously they have different histories. But they are each verbal symbols and can be deployed or revalued or reinterpreted like any other symbol including the Confederate flag or the swastika."

He adds, "In a bow to history, I will say that using any of these symbols is presumptively bad. But only presumptively. They can all be put to other uses. Context is all important."

They are each verbal symbols and can be deployed or revalued or reinterpreted like any other symbol including the Confederate flag or the swastika.

Part of the context, of course, is where we are as a society. Jesse Sheidlower, editor at large of the Oxford English Dictionary, told USA Today in 2007 that "we are in a place where the words traditionally considered the most obscene — sexual and scatological words — are viewed as less and less offensive, while words that are ethnic and religious slurs have increased in offensiveness."

The more the culture cares what blacks, Hispanics or gays think, Sheidlower said, "the more attuned we are to slurs against them."

Men belittling men — on a basketball court, in a bar, at a business meeting — is an ancient practice. "Even enlightened men," says Stuever, "men with many gay friends, men with functional relationships with wives and girlfriends — will demasculinize one another in casual conversation."

That challenge to manliness is at the heart of the recent NBA incidents. And whether the origin of the Fa-word-meaning today comes from the burning of heretics or the belittling of women (see Origins Of The Fa-Word), there is no positive way to look at it.

In our most popular culture, Stuever says, "nothing is currently more funny to male and female audiences than the subtle anti-gay joke, in which masculinity is threatened by inferences or direct examples of homosexuality. You see it everywhere – Saturday Night Live, sitcoms, movies like The Hangover."

Stuever says that when he was in college and just coming out, there was a sense that gays and lesbians could neutralize slurs "with irony and rebellious embrace. I think those of us in Generation X still like this approach."

But, he adds, in this age of anti-bullying, there is renewed effort to get kids to stop using all kinds of slurs. He alludes to a campaign against the word "retarded," made visible by public service announcements featuring Jane Lynch of Glee. He also points to a recent full-page advertisement in The New York Times urging people to stop saying "gay" to dub something undesirable or repugnant, as in "That's so gay."

In fact, Stuever suggests, this might be the next anti-slur frontier: the scrubbing away in popular parlance of the word "gay." Or, as he perhaps presciently refers to it, "the G-word."