Accessibility links
Technology Brings Digital Memories To Grave Sites A Seattle company is adding "quick-read" codes to gravestones, allowing cemetery visitors to connect with the dead's life stories. Using their smartphones, passers-by can scan the QR code and access a website that shows photos and other information about the deceased. 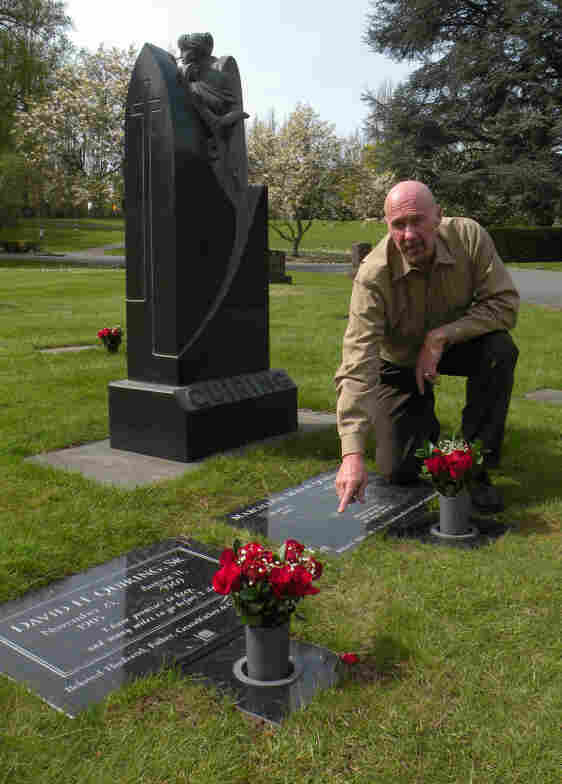 Dave Quiring Jr. inherited Quiring Monuments from his father 43 years ago. He points to the QR codes he has attached to the gravestones of his father and mother at their family plot in Seattle's Evergreen Washelli Memorial Park. Bellamy Pailthorp/KPLU hide caption 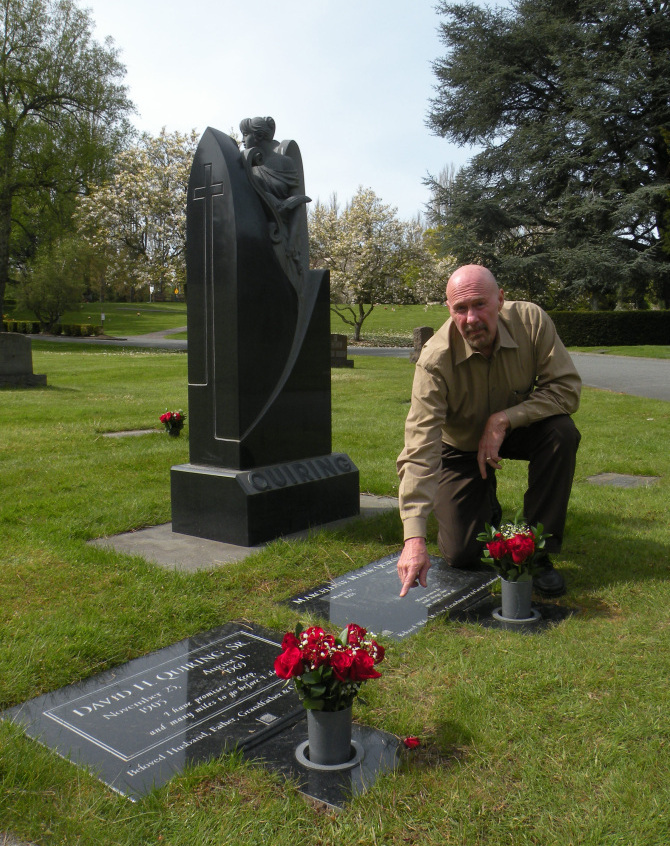 Dave Quiring Jr. inherited Quiring Monuments from his father 43 years ago. He points to the QR codes he has attached to the gravestones of his father and mother at their family plot in Seattle's Evergreen Washelli Memorial Park.

The process of burying the dead hasn't changed much over the centuries, but now their gravestones can provide a digital link to their life stories.

A Seattle-based company is creating burial markers that include a scannable, stamp-like image called a "quick read" — or QR code.

The codes can be placed on tombstones so visitors can learn more about the dearly departed, leave messages for their loved ones, and record stories for others who may visit. And all you need is a smartphone and a free app to make it work.

Death and the human desire for remembrance are the constants that have kept Quiring Monuments — run by Dave Quiring — going for three generations. Quiring is part grief counselor, part artisan, part editor.

"My job is to help people tell a story in stone, generally," he says. 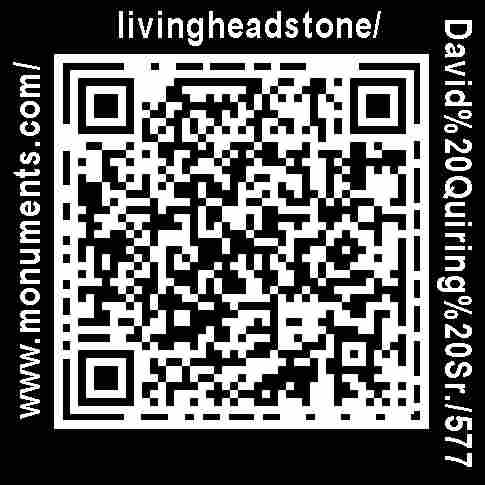 Quiring inherited his role 43 years ago, when his father died. Since then, he's added bronze, glass, even stainless steel and color photographs to the materials the company uses to make modern headstones. And now he's going digital: by offering black-and-white QR codes for gravestones.

You may have seen QR codes in magazine ads. They're a little larger than a postage stamp and look a bit like a combination of a bar code and a Rorschach blot. You scan them with a free smartphone app and they bring up a website. Quiring pulls one from his shirt pocket.

A few seconds later, my smartphone begins beeping, and soon it has pulled up a sepia picture of a man in a double-breasted suit looking out at us.

Quiring beams at the sight of this picture and the slideshow that follows. There's the obituary that was in the newspaper after his dad died and a scan of part of a Robert Frost poem that his wife found in his wallet. It became David Quiring Sr.'s epitaph.

We head to the veterans cemetery less than a mile up the road from the shop to visit the Quiring family's plot. 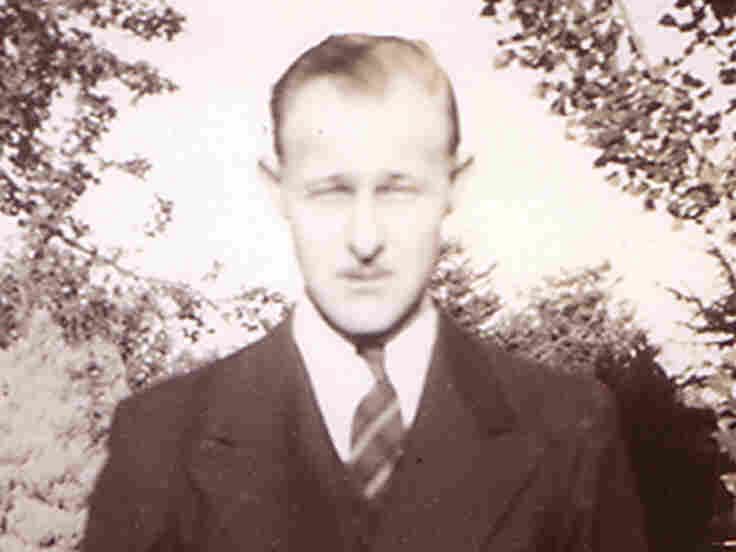 A portrait of David Quiring Sr. This is the first image that appears when you scan the QR code at his grave. See his QR website. Courtesy of Quiring Monuments hide caption 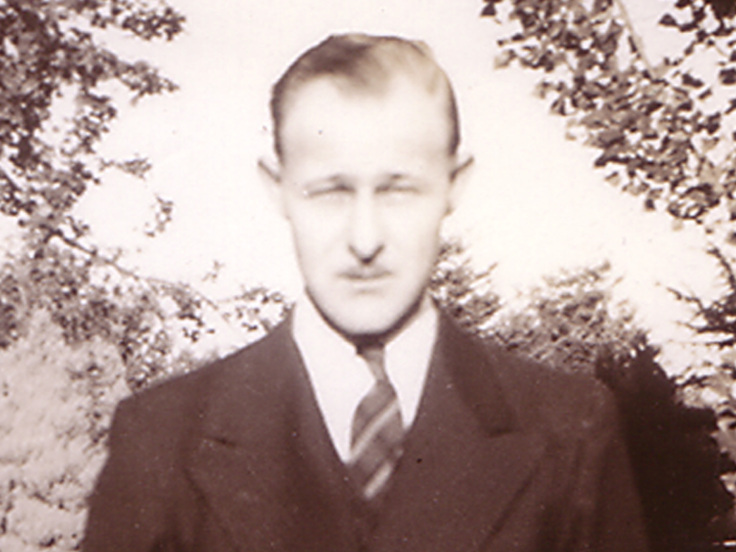 A portrait of David Quiring Sr. This is the first image that appears when you scan the QR code at his grave. See his QR website.

From the car, Quiring — who himself served during Vietnam — looks past some blooming cherry trees. Rows and rows of uniform white monuments cover the hillside. His shop has a federal contract to make them. He'd love to see his QR code stickers added to each one.

"And then you could make a tour through there and it would be more than just a bunch of white monuments," he says. "It would be distinct lives of people who really deserve to have their story told."

It's an idea that's catching on — and not just with QR codes. A company in Phoenix has started selling tombstones with RFID tags for digital storytelling. That's a technology used for tracking things like library books and clothing in retail sales.

Also visiting this cemetery is 80-year-old Harry Coles. He's an army veteran, making stops at his brother's and mother's graves. He doesn't own a cell phone, much less a smart one. But he likes the demonstration of how the QR codes work at the Quiring family's graves.

From Quiring Moments, an ad on how QR codes work.

Coles says he's old-fashioned, so he wouldn't want anyone to buy one for him. But he thinks having one could mean a lot.

"For some people it brings back happy memories, and probably some bad memories, sorrowful memories," he says. "But, mostly, I would think, it's out of love. That's the basis for the whole thing."

And it's the vision for Quiring Monuments: using technology to help future generations connect with their past.

Separated By War, Reunited By The Web: Photo Project Links Holocaust Survivors May 9, 2011
Hand-Carving Gravestones A Dying Craft Jan. 4, 2009
Online Memorials to the War Dead May 28, 2007