Accessibility links
Mexican Cartels Spread Violence To Central America While drug trafficking is not new to the region, the volume of drugs and levels of violence have increased in recent years. In Guatemala, experts warn that the volatile mix of a weak state, powerful drug traffickers, lots of weapons and intractable poverty could cause a collapse. 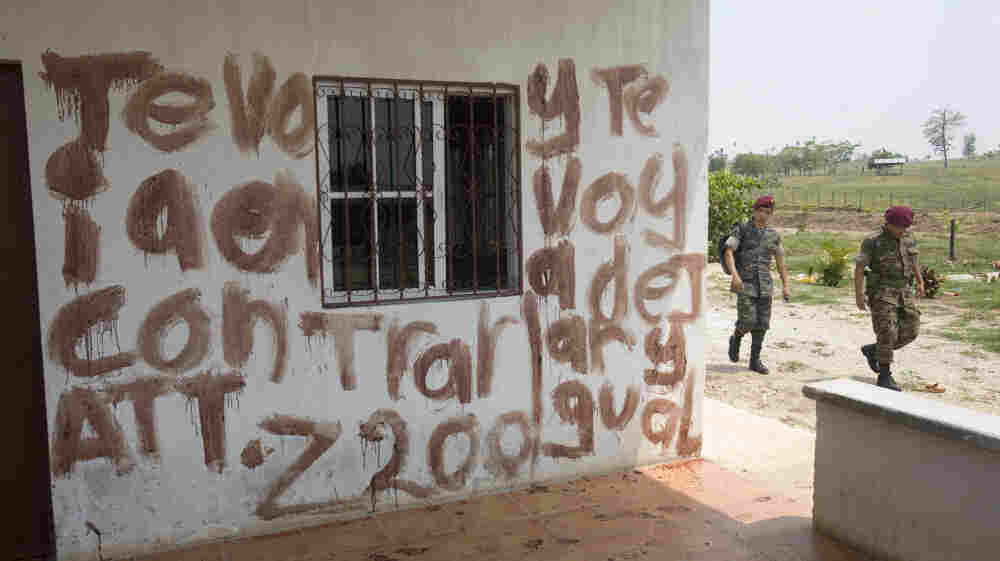 Soldiers walk past part of a message written in blood at the site of a massacre at a ranch in northern Guatemala on May 16. The message is a warning to Otto Salguero — the owner of the ranch, according to local media. Guatemalan authorities blame the killings on the Mexican drug cartel Los Zetas. Moises Castillo/AP hide caption

First of a three-part series. Read Part 2 and Part 3.

Mexico's drug cartels are carving out new territory in Central America, in some of the poorest and most fragile countries in the hemisphere.

Mexican gangs are cutting clandestine airstrips in the Guatemalan jungle, laundering money in El Salvador and unloading boatloads of cocaine on the coast of Honduras.

The World Bank recently warned that narcotics trafficking poses one of the greatest threats to development in the region.

The volume of drugs passing through Central American countries has risen in recent years. Shipments of cocaine and other drugs originate in Colombia and Venezuela, and travel by sea and air to Guatemala, Honduras, Nicaragua and other countries. Overland routes bring the drugs into Mexico and then to the United States.

Guatemala is dealing with one of Mexico's most feared cartels: Los Zetas. The Zetas have been blamed for some of the worst massacres in Mexico's bloody drug war. Their presence in Guatemala has been no different.

In the capital of the northern Guatemalan Peten region, the bus station is just a small parking lot in the city's main market. Grimy vans and small buses idle by the curb, spewing clouds of powdery, black soot. Several of the drivers have pistols strapped conspicuously to their belts, and they call out the names of Mexican border posts — destinations for migrants, food smugglers and traveling merchants.

This is the Guatemalan equivalent of the Wild West — a remote, sparsely-populated area along Mexico's southern flank.

A local Catholic priest, Father Javier Pla, says in this area, there are few health clinics, schools, police posts or other government services.

"Eighty percent of the residents in the vast Peten province live off subsistence agriculture," he says, adding that there is little or no help from the government. "The consequence is this: people live poorly, or migrate to the United States, or align themselves with criminal groups in order to get by." 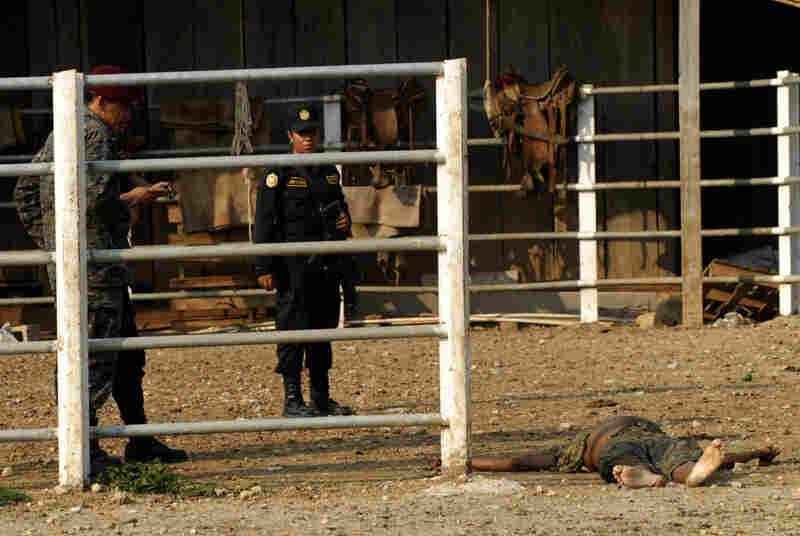 Investigators work at the site of a massacre at a ranch in northern Guatemala. Most of the 27 people killed were decapitated. AP hide caption 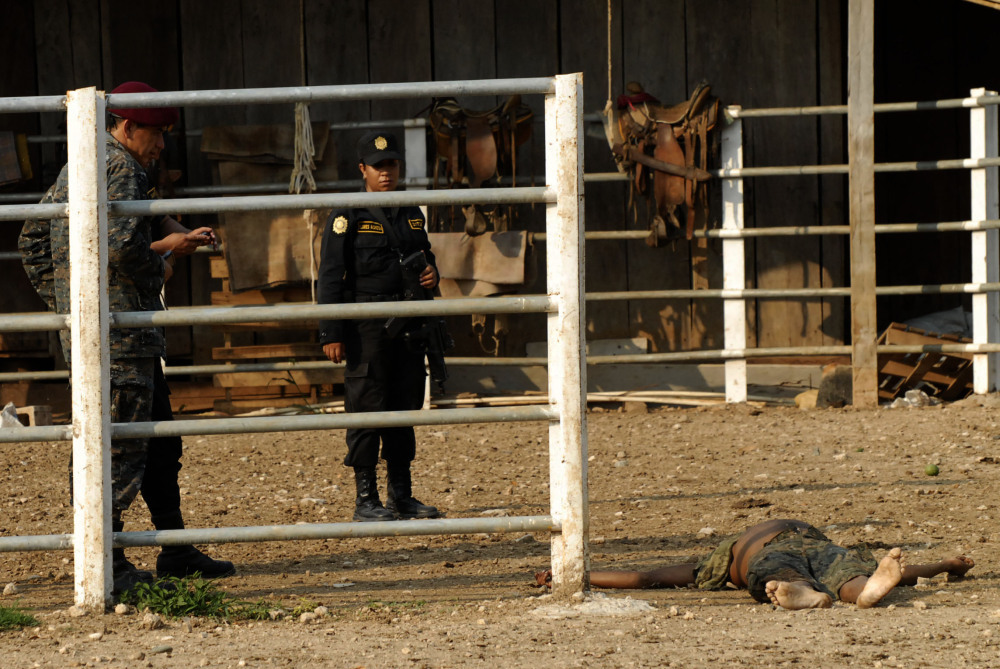 Investigators work at the site of a massacre at a ranch in northern Guatemala. Most of the 27 people killed were decapitated.

And over the last three years there's been a new, powerful criminal group offering work — the Zetas.

'A Huge Aggression' By The Cartels

Earlier this month, dozens of heavily armed gunmen, allegedly from the Zetas, stormed a cattle ranch near here. They tied up the ranch staff, beat them and left 27 people dead. Most were decapitated.

It was the worst massacre in Guatemala since the end of the civil war in 1996.

In an interview with NPR the day before the massacre, President Alvaro Colom said international drug trafficking gangs are the biggest threat facing Guatemala and the region.

The cartels, with their tens of billions of dollars in revenue each year, have access to machine guns and rocket-propelled grenades. They use airplanes, speed boats and even submarines to move cocaine from Colombia into the region. Under attack in Mexico, the Zetas have built their own airstrips in the Guatemalan jungle.

Colom said some parts of his country near the Mexican border are currently controlled by the cartels. The government is fighting back. 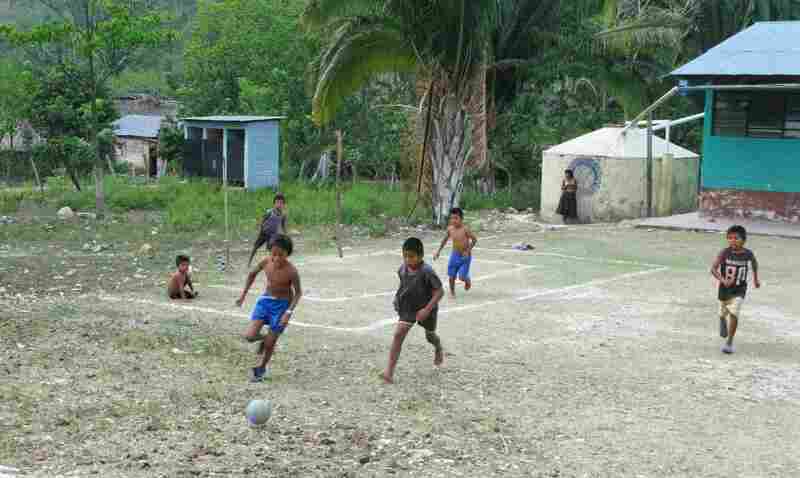 The village of Limon, in the Peten region of northern Guatemala, is a very poor area similar to where the Zetas cartel is grabbing territory. There's no electricity, water is trucked in and people cook over open fires. Jason Beaubien/NPR hide caption 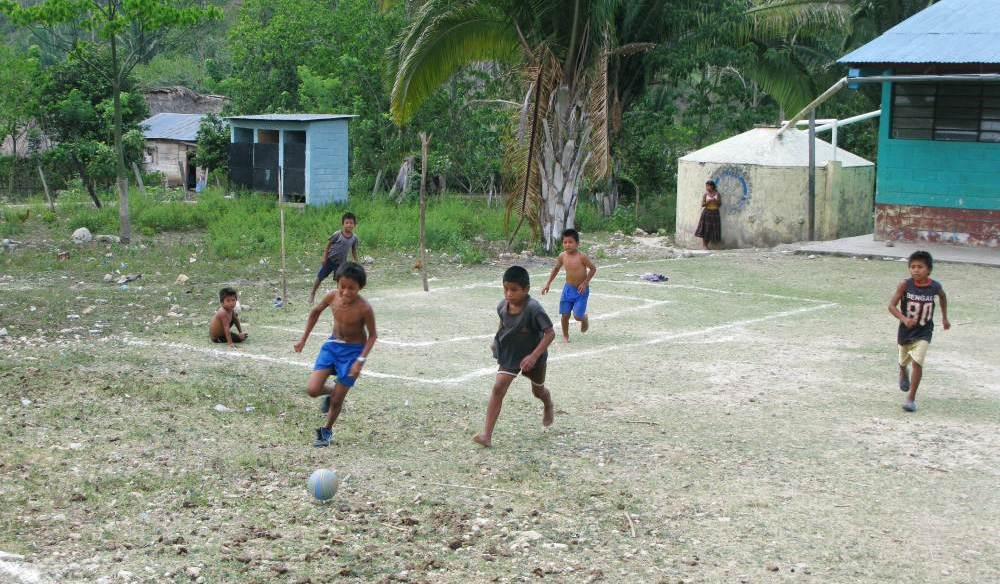 The village of Limon, in the Peten region of northern Guatemala, is a very poor area similar to where the Zetas cartel is grabbing territory. There's no electricity, water is trucked in and people cook over open fires.

"It's a huge aggression. At times our resources are limited, but yes, we are regaining control of our territory," he said.

The push into Guatemala by the Zetas and other Mexican gangs has coincided with a significant rise in violent crime. Guatemala's murder rate is now twice that of Mexico's. And in neighboring Honduras, which faces a similar problem with drug traffickers, the situation is even worse: Honduras now has the highest homicide rate in the hemisphere.

Drug smuggling in Central America is nothing new. What has changed recently is the volume of drugs and the levels of violence.

"Before 2008, the violent incidents related to drug trafficking weren't as common as they've become in the last three years," says Julie Lopez, a Guatemalan writer and researcher who recently wrote a report for the Woodrow Wilson International Center for Scholars in Washington titled "Guatemala's Crossroads."

The report chronicles how Guatemala's state security apparatus broke down in the years after the 1996 peace accords — a period in which the army was cut by two-thirds and a new national police force was still in its infancy.

Organized crime rushed in to exploit the security vacuum.

"You have, in some areas, some policemen with 9 mm guns that maybe work, or not, having to face drug traffickers with AK-47s and grenade launchers," she says. "It's a lot to ask of a policeman who doesn't have any means of protecting himself."

But the problem in Guatemala isn't just whether or not the police have sufficient fire power.

A Recipe For Guatemala's Collapse?

Fernando Giron Soto, a security analyst at the Myrna Mack Foundation in Guatemala City, says the problem is that drug trafficking money has permeated Guatemalan society. It corrupts government officials and it flows directly or indirectly into the coffers of the business elite.

"An economy as small as Guatemala's does not support the quantity of banks we have here, nor could it support them, given the difficult economic situation facing this country," he says.

More than half of Guatemala's workforce toils in the informal economy — selling goods on the street, doing manual labor for $10 or less a day. And at the other end of the economic spectrum, those in the small upper class drive German sports cars and avoid paying most taxes. Even by Latin American standards, income distribution in Guatemala remains dramatically skewed in favor of the rich.

Giron and others warn that the volatile mix of a weak state, powerful drug traffickers, lots of weapons and intractable poverty could cause the country to collapse.

"Unless the elites take seriously the question of this country's survival, we run the risk of becoming something — not exactly equal — but something similar to Haiti," Giron says. 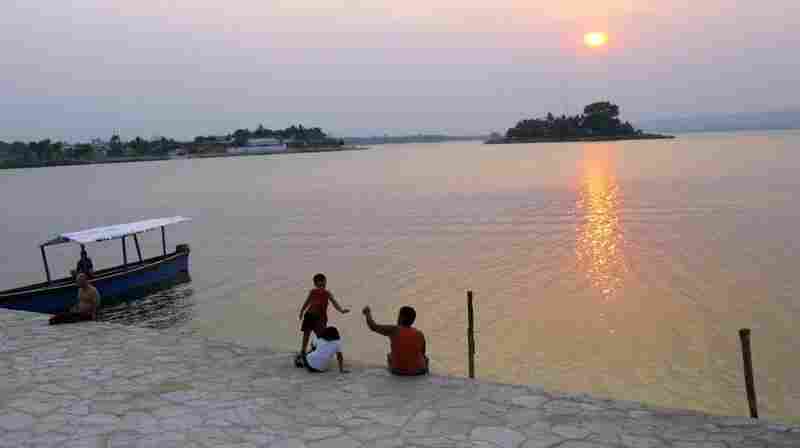 The town of Flores in northern Guatemala is packed with small hotels and is a hub for tourists who come to visit Mayan ruins. But the tourism industry in Guatemala has been hard hit by cancellations in response to the drug violence. Jason Beaubien/NPR hide caption 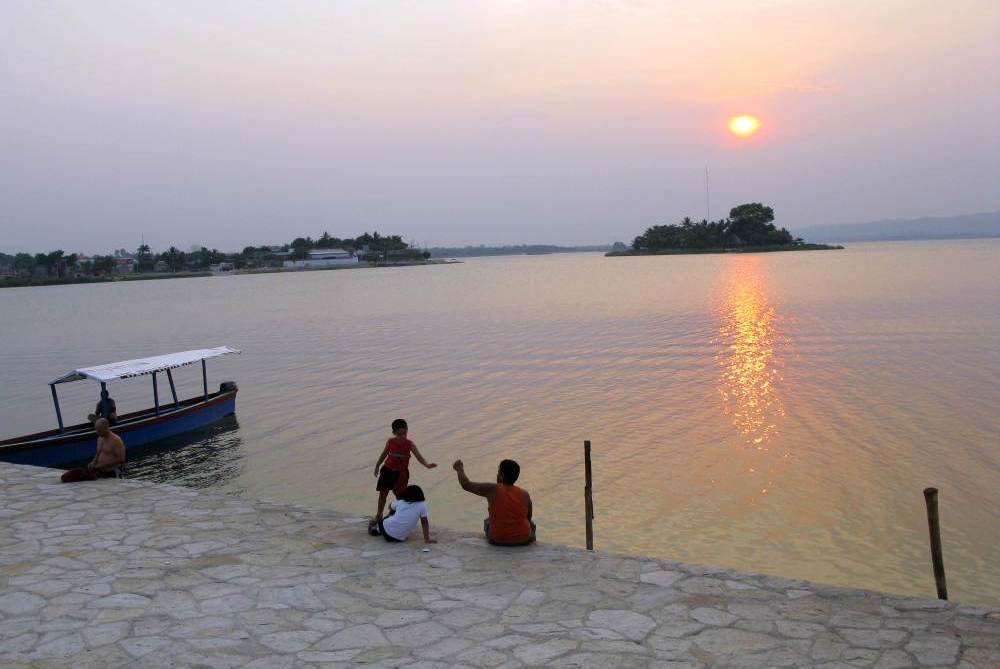 The town of Flores in northern Guatemala is packed with small hotels and is a hub for tourists who come to visit Mayan ruins. But the tourism industry in Guatemala has been hard hit by cancellations in response to the drug violence.

The impact of the narcotics trade is felt throughout this small country.

Drug-fueled violence and corruption discourage new business investment. The government is forced to expend resources and money chasing gunmen from the latest massacre.

"Besides all this ugly stuff about drug trafficking, this is a safe place," says Anselmo Galicia, a tour operator in the northern city of Flores.

Galicia takes American and European tourists on trips to the Mayan pyramids at Tikal and on treks in the jungle. He's never heard of a single tourist getting caught up in the narcotics violence, yet news reports of bloody drug gang shootouts, he says, drive away foreign visitors.

Galicia recounts being in the travel agency office just after word got out of an hours-long clash in Peten between a convoy of Zetas and the police.

"And after that event, they canceled all the reservations," leaving only three or four remaining, he says. That was at just one travel agency — he says the loss in revenue for the region was huge.

President Colom says there's no way Guatemala can tackle this problem on its own. The best solution, he says bluntly, would be for U.S. consumers to stop buying cocaine.