Accessibility links
Study Of Arsenic-Eating Microbe Finds Doubters The journal Science has published critiques by eight scientists of a report that described a mysterious microbe in California's Mono Lake that seemed to thrive on a diet of arsenic. One of the critics says the hype surrounding the paper got ahead of the science. 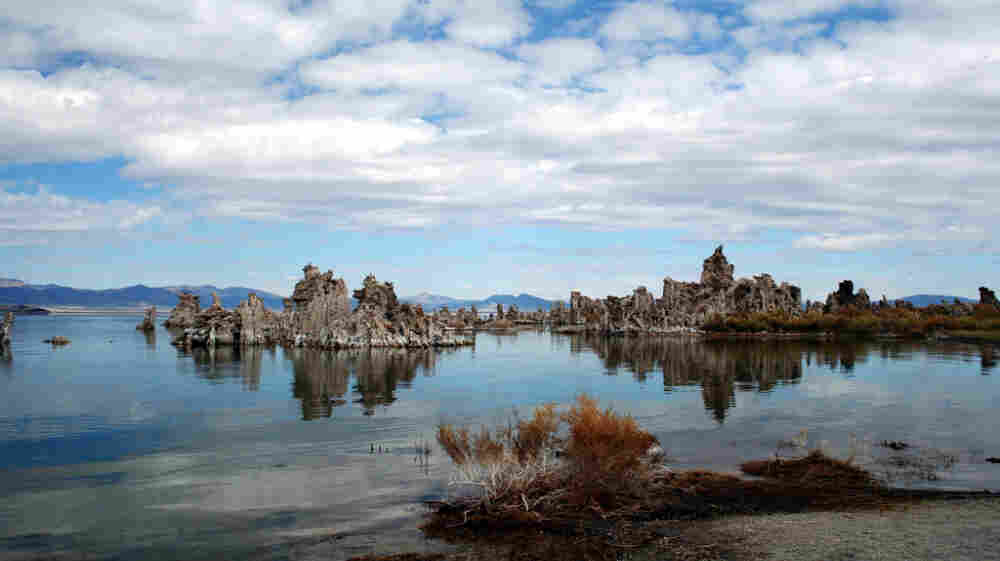 A study published in the journal Science last December suggested that a bacterium found in California's Mono Lake was able to substitute arsenic for phosphorous. But that conclusion has many critics. Miss Bliss 55 via Flickr hide caption

A group of scientists has formally challenged the conclusions of a highly publicized report describing a mysterious microbe that seemed to thrive on a diet of arsenic.

The report, published in December by the journal Science, suggested that a bacterium found in California's Mono Lake was able to substitute arsenic for phosphorous, one of several elements considered essential for life.

At the time, NASA researcher and lead author Felisa Wolfe-Simon said, "This is an organism that has solved the challenge of being alive in a unique way."

The claim got a lot of media attention, in part because the paper was unveiled at a massive press conference hosted by NASA. During the press conference, NASA scientists speculated that the finding increased the likelihood that life could exist on other planets.

But many scientists weren't convinced by the paper. And now Science has published critiques of the paper by eight of them.

One of the critics is Patricia Foster, a professor of biology at Indiana University. She says the hype surrounding the paper got ahead of the science.

"I was skeptical right from the start because it just seems such an improbable thing," she says. "Plus I was put off by all the press that surrounded it."

Foster says she doesn't question the integrity of Wolfe-Simon and her team, only their conclusions.

The team did find a remarkable creature that can thrive on lots of arsenic and very little phosphorous, Foster says. But the scientists did not show that the organism could get by without any phosphorous at all, she says.

The nutrients provided to the organism in the lab contained trace amounts of phosphorous, Foster says. And she believes the presence of arsenic helped the bacterium use the tiny amount of phosphorous very efficiently.

Foster says she is not convinced by evidence that the organism incorporated arsenic into its DNA molecules in place of phosphorous. And she says Wolfe-Simon and her team should have put together a stronger case before making such an extraordinary claim.

"You've got to give me more evidence to back that up because there's no precedent," Foster says.

Other criticisms of the paper have come from chemists.

It's not surprising that chemists would be skeptical because the finding goes against what they know about the ability of arsenic to form chemical bonds, says Steven Benner of the Westheimer Institute for Science and Technology and the Foundation for Applied Molecular Evolution in Gainesville, Fla.

He says chemistry indicates that any DNA molecule with arsenic in place of phosphorous should fall apart in water in a matter of minutes.

"The chemists are basically saying this hypothesis is at such odds with what we know about chemistry it's not even worth considering," says Benner, who is both a chemist and biologist.

But many biologists and scientists from other disciplines might be less likely to dismiss the possibility out of hand, Benner says. They would argue that this organism's ability to thrive on a diet with so much arsenic is strong evidence that it is using arsenic in unusual ways.

"It leaves you in a interdisciplinary discussion, you might call it a fight, where the standards of proof and the ground rules for having that discussion are not settled on in the first place."

Wolfe-Simon says the critiques raise valid concerns. But they haven't changed her mind or the minds of her co-authors, she says.

"We really maintain that our interpretation of arsenic substitution is still viable and valid," she says.

One result of all the debate has been offers from other scientists who want to help figure out precisely how this organism survives, Wolfe-Simon says.

She says that with more scientists working on the question, it shouldn't be long before the world knows a lot more about her mysterious microbe.