Accessibility links
German Toll Rises In Europe's E.coli Outbreak The death toll from the outbreak allegedly caused by contaminated Spanish produce rose to at least 11 in Germany. Meanwhile, Spain said there was no proof that the E. coli outbreak has been caused by Spanish vegetables. 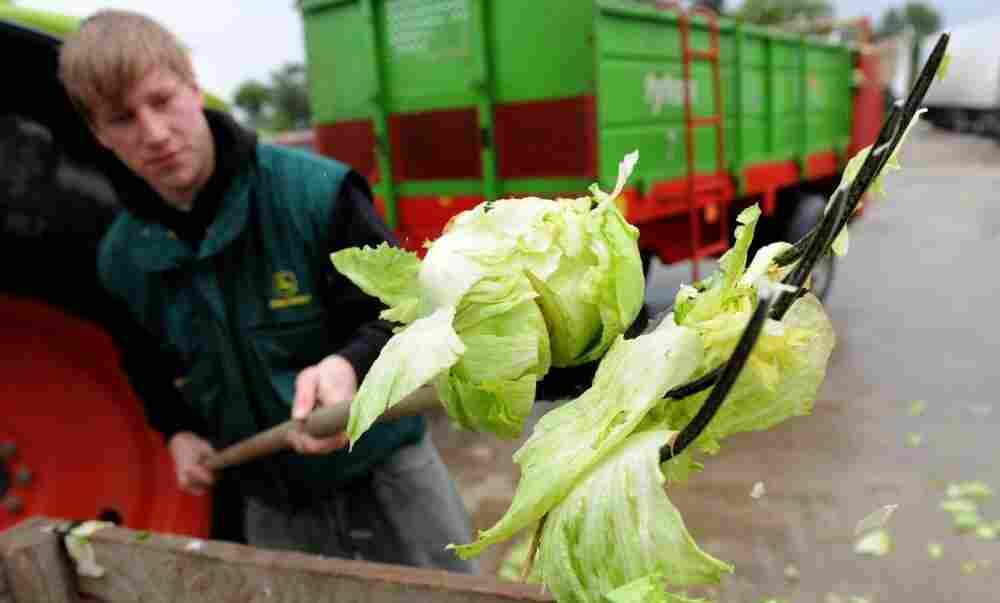 German farmer Tim Voges destroyed produce in the town of Ronneburg because of suspicion that vegetables could be contaminated with Enterohaemorrhagic E. coli bacteria. Julian Stratenschulte/AFP/Getty Images hide caption 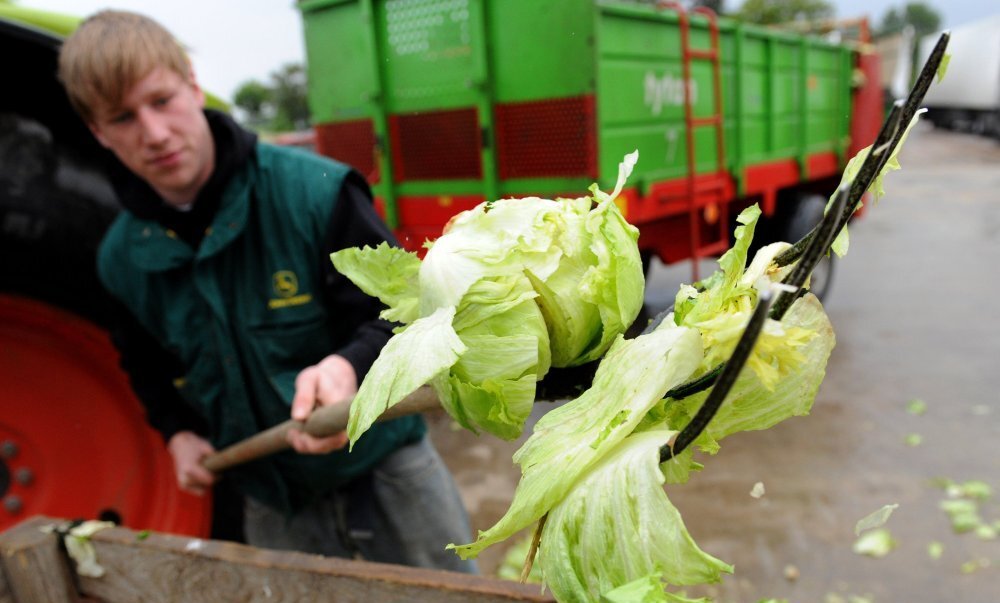 German farmer Tim Voges destroyed produce in the town of Ronneburg because of suspicion that vegetables could be contaminated with Enterohaemorrhagic E. coli bacteria.

The death toll from a bacterial outbreak caused by contaminated vegetables rose to at least 11 in Germany on Monday as inspectors in several European nations rushed to check produce.

German scientists suspect the bacterium that has sickened hundreds of Europeans came from Spanish organic produce. The Health Ministry in Hamburg said three out of four cucumbers carrying the bacterial strain were from a Spanish shipment.

But there have been no reported cases in Spain, and the European Disease Center cautioned that the definite source of the enterohaemorrhagic E.coli, also known as EHEC, is not yet known.

"You can't attribute the origin of this sickness to Spain," Lopez Garrido told reporters in Brussels. "There is no proof and that's why we are going to demand accountability from those who have blamed Spain for this matter."

Germany has been hit hardest by the outbreak, but some E.coli cases have also been reported in Sweden, Denmark, the United Kingdom and the Netherlands.

In Poland, officials said Monday that a woman has been hospitalized in serious condition after returning from a trip to the northern German city of Hamburg, where at least 467 cases of intestinal infection have been recorded.

"We have found the so-called EHEC pathogens on cucumbers, but that does not mean that they are responsible for the whole outbreak," Andreas Hensel, president of Germany's Federal Institute for Risk Assessment, said on ZDF television.

Spanish vegetables that came via Germany were being pulled from shelves in Austria and the Czech Republic.

Austrian authorities sent inspectors to 33 organic supermarkets Monday to make sure Spanish vegetables suspected of contamination have been taken off shelves. The move came after a recall and sales ban of cucumbers, tomatoes and eggplants that originated in Spain and were delivered to stores in Austria by German companies.

"If anything is found to be left over, it will be tested and taken off the market," Austrian Health Ministry spokesman Fabian Fusseis said.

While two German tourists have tested positive for enterohaemorrhagic E.coli, no so-called homegrown cases have been reported, he added.

In Italy, meanwhile, the country's paramilitary Carabinieri tainted food squad has been on the lookout since Saturday for any contaminated cucumbers, checking imports from Spain, the Netherlands and other European countries. So far, lab analyses have come back negative, and no cases of food poisoning have been reported.

European Union spokesman Frederic Vincent said Sunday that two greenhouses in Spain that have been identified as possible sources of the contaminated cucumbers had ceased activities. The water and soil there are being analyzed to see whether they were the problem, and the results are expected Tuesday or Wednesday, said Vincent.

The EU's agriculture minister was expected to discuss the issue Monday at a meeting in Hungary.

NPR's Eric Westervelt reported from Berlin for this story, which contains material from The Associated Press.