Accessibility links
Detroit Looks To Charters To Remake Schools The Detroit Public School system hopes to convert dozens of schools into charters in the next year or so in a last-ditch effort to cut costs and stop plummeting enrollment. The plan faces tremendous skepticism from a generation of parents and teachers frustrated from previous reform efforts. 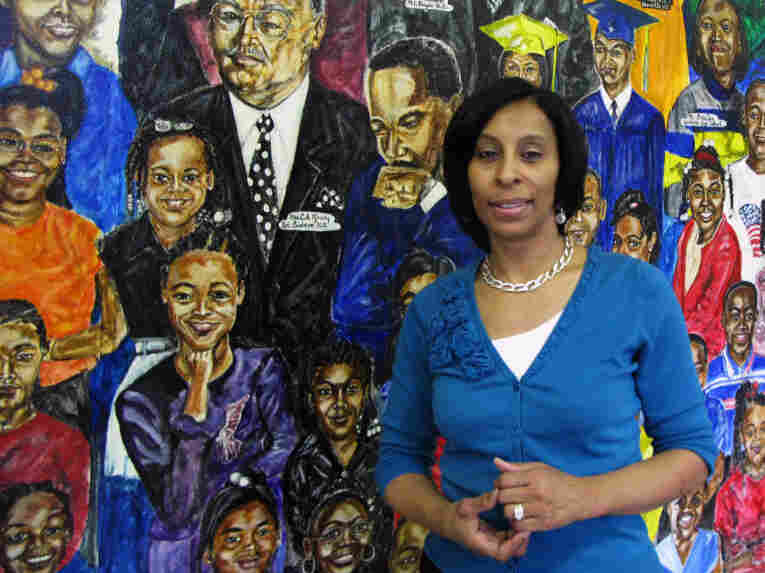 Janice Richardson, principal of Carstens Elementary School, stands in front of a mural in the school's entryway. The Detroit Public School system is losing thousands of students, and Carstens may have to close or become a charter. Larry Abramson/NPR hide caption

The Detroit Public School system hopes to convert dozens of schools into charters in the next year or so in a last-ditch effort to cut costs and stop plummeting enrollment.

The plan faces tremendous skepticism from a generation of parents and teachers frustrated from previous reform efforts.

No one has ever done what DPS is trying to do: turn more than 40 schools into charters, some in just a few short weeks.

Greg Richmond of the National Association of Charter School Authorizers says that when the city first approached him with this idea, he hesitated.

"I was concerned when I first heard about Detroit's idea of starting a large group of charter schools this year, that they were trying to do too much too fast," Richmond says.

Richmond is helping review applications from groups that want to run charters. He served the same role when New Orleans planted its own crop of charters after Hurricane Katrina. That was a tough challenge. But in many ways, Detroit faces even steeper odds.

'Suddenly Not A Good Fit'

New Orleans schools were empty after the storm. Detroit's are not.

Carstens Elementary, on the city's east side, is still open for business, though its enrollment has taken a significant hit. Flight from this depressed area has robbed the school of more than one-third of its students in just five years. But it's slated to close, and Principal Janice Richardson says that declining enrollment and a deteriorating building are to blame. "But other than that, we are an achieving school, and we are recognized as being high-performing," Richardson says.

The school's scores have been above the state average, at least until recently. But in a city facing a massive school deficit, enrollment numbers are all that matter.

Now, there is a way out: Carstens could become a charter. Richardson and her staff say "No thanks."

"It would satisfy DPS. However, it wouldn't satisfy us. We would preferably like to remain a Detroit Public School," Richardson says.

For one thing, a charter school would sweep aside the school's union contract and pension benefits. But Barbara Haug, a veteran teacher at Carstens, is against charters for another reason. She believes they reject the struggling students who come to schools like Carstens.

"They get the kids, they get the cash, and then a little bit after that they're suddenly not a good fit anymore," Haug says.

That's a common belief here. Some say it's a myth, since the law says charters must accept all students. But in a city in crisis, with only nine existing charters, suspicions are rampant, even among those who say they want to help the charter movement. 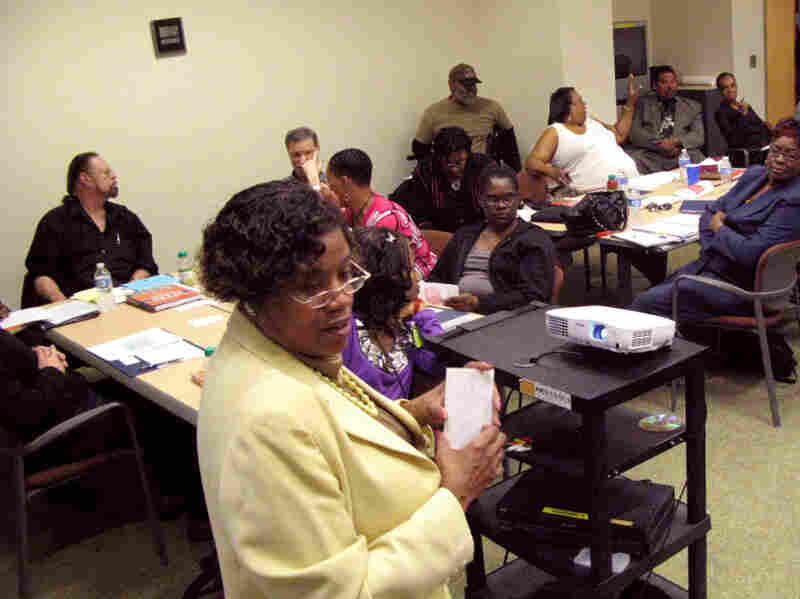 Angie Melhado, a charter school consultant, talks to parents and community members who are considering serving on charter school boards. Detroit wants to convert dozens of traditional schools to charters, but many in the city remain skeptical about the plan. Larry Abramson/NPR hide caption

The name of the effort to save the city's schools is Renaissance 2012. Last week, about 50 parents and community members gathered in a Detroit conference room to learn about what it means to take part in it and serve on the board of a charter school.

It's no party. Charter boards have to find a management firm, hire lawyers and work out contracts. It's all part of the unfamiliar model that practically turns each charter into its own school district.

Some in the audience don't seem to believe Angela Irwin of the National Charter Schools Institute as she explains that Michigan law treats charters much like traditional public schools. Many of these people are products of DPS. They seemed stunned that the system that educated them is deemed a failure, in need of help from outsiders. They have questions.

"Why is the focus on charter schools?" asks Roberta Price, a DPS alum. "Why can't the traditional schools do this?" Price can't see why changing who's in charge will make a difference.

DPS has some fine schools, others point out, and schools with selective admissions policies that attract the city's elite. During coffee breaks, there's grumbling. One woman barks in frustration, "I am not giving up on DPS, I don't care what anybody says. I'm tired of hearing that bad rap about us."

To a city down on its luck, the plan to save schools comes across like a foreign government coming in and offering charity. But the passion over this issue shows that people here are committed and that they are here to stay.

Richmond of the Association of Charter Authorizers says that shows the city is no longer in denial. "Detroit has lost tens of thousands of students over the last decade," he says. "And people are starting to realize they have to change the way they do things in order to turn that around."

Now, Richmond says, the city needs to attract a dedicated cadre of school leaders and principals, the way New Orleans did. Bringing in new talent without alienating the people who live here is the next big hurdle.