Accessibility links
Criticizing Pakistan's Military: Dangerous, As Is Life Asma Jehangir, a human rights advocate and lawyer in Pakistan, has sharp words for the country's dominant institution. The military is under pressure from the U.S. following the raid on Osama bin Laden's compound. 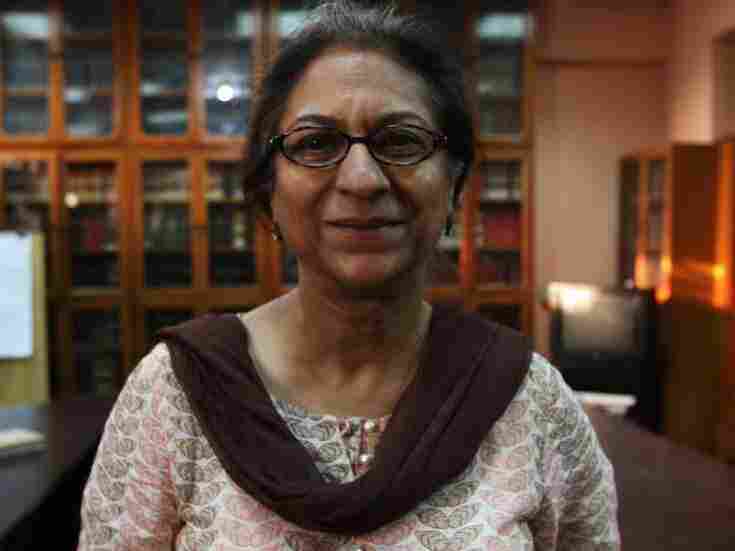 Asma Jehangir, a human rights advocate and lawyer in Lahore, Pakistan, is an outspoken critic of the military. Jim Wildman/NPR hide caption 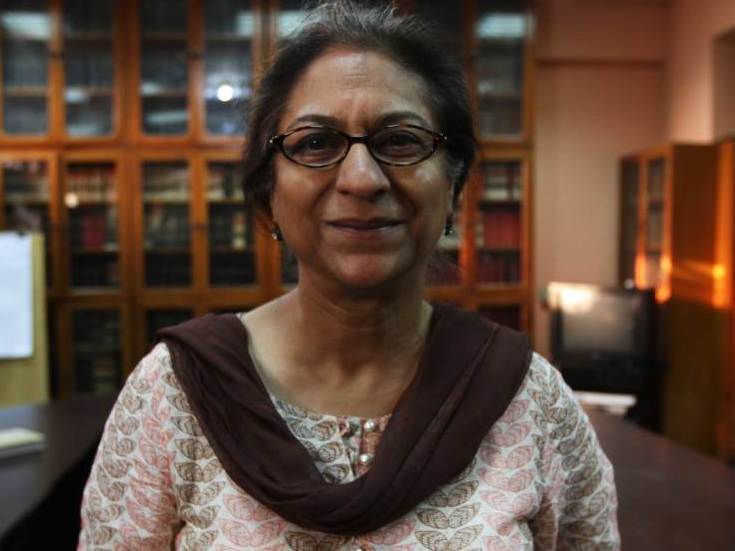 Asma Jehangir, a human rights advocate and lawyer in Lahore, Pakistan, is an outspoken critic of the military.

Pakistan's powerful army faces criticism at home after Osama bin Laden's death. Some of the criticism comes at political rallies like one in Lahore, where opposition leader Nawaz Sharif stood onstage.

Sharif asked supporters if they want an independent investigation of the U.S. raid in which bin Laden was killed. He repeatedly asked the crowd, "Are you with me?"

He even got the crowd howling for an inquiry of another military misfortune — when militants attacked a naval base last week and destroyed surveillance planes.

Sharif did not criticize the military too directly, but it's a high-pressure time for Pakistan's dominant institution — which is also under pressure from the U.S.

From her office in Lahore, human rights activist and lawyer Asma Jehangir had sharp words for the military.

What difference has [the killing of Osama bin Laden] made to my life? My life is as uncertain as it was before. In my life, I see violence every day.

"I think I have lived enough in this country, and I think enough people trust me where I can say what I think is true and with the voice of my conscience," she says. "If I cannot live with a conscience in this country, I'd rather not live."

Jehangir is a tiny woman, modestly dressed, with glasses and her graying hair pulled back. The books on her shelves have titles like Rise of Fascism and Administration of Torture. She has been jailed in the past for criticizing the government, and the armed guard stands outside her door because men tried to kidnap her family many years ago.

In recent days she has publicly urged the army to get more serious about the threat of terrorism, and a national newspaper soon criticized her.

But she has ignored calls for Pakistanis to get together behind their military in a time of crisis.

"If getting together with them means that we hide things, then I am afraid I am committing the same offense people do in history who don't speak up at the right time," she says.

Inskeep: You spoke up on television the other day and have received quite a bit of attention for that. What did you say?

Jehangir: That's not the first time I've spoken up, but this was a live program so there could be no censorship on it. And what I said is that the military leadership is — I used the word "duffer." And I'm sorry I used the word duffer — I should have said dangerous duffers.

I'm thinking about that word "duffer" — it means incompetent, they don't know what they're doing. What makes that the right word for them right now?

Well, duffer has a special connotation — it's also a person who is not only incompetent, but incapable of learning.

Is there a limit to how much you can criticize the military?

Do you know that many years ago, nobody could say anything about the military? And there are laws in this country that you cannot criticize the military. So we have come a long way. It's true that even now, they don't like criticism — well, too bad for them. I don't like to be killed in violence.

I'm sure it is. But we all live dangerous lives here.

Do you see a way for civilians to assert greater control over the military — a practical way that could happen?

There is a practical way, and there must be a practical way. But for that, we have to be able to sacrifice. First of all, our civilian leadership has to be clean as a whistle. Unless they're not, they will always be subject to blackmail.

You need to have clean politicians.

Let's remind people that in this country vastly more is spent on defense than, say, education.

What is going to be the foreign policy of Pakistan? I think there has to be consensus amongst political leadership: Do we want, or do we not want to have peace with our neighbors? Do we then need such a large army?

When you have talked with your friends, your relations, your colleagues, people you meet in your work in the past few weeks, have you noticed signs of anxiety or paranoia about the state of the country?

When I'm at the [lawyers' bar association] room ... it used to be very lively discussion. I see a kind of demoralization — a kind of depression. In the face of those forces that are extremist — because they are too strong for you to fight.

I want to make sure that Americans understand this. Why would this be a moment for depression? Because the last big event was that bin Laden was killed — the good guys won. Why wouldn't that be a moment for exhilaration or opportunity?

For you, in the U.S., it was a big event. For us, where does it change things for us for the better? He was somebody the U.S. was looking for, and they got him. So what has happened to us? Where were we in all this? We've had the same amount of bombings — in fact, more. There have been retaliatory bombings, or not retaliatory, because they have been going on. So what difference has it made to my life? My life is as uncertain as it was before. In my life, I see violence every day. Today, for example — I'm just coming from the court — two people were murdered inside the court. Inside the courtroom. For us, life is tough here. Very tough. If bin Laden is dead, do you think I'm not threatened?

Update: Pakistani Journalist Reported Dead; He Wrote Of Ties To Terrorism May 31, 2011